6 years ago at 5:45 am ET
Follow @IanLogue
Posted Under: Patriots Commentary 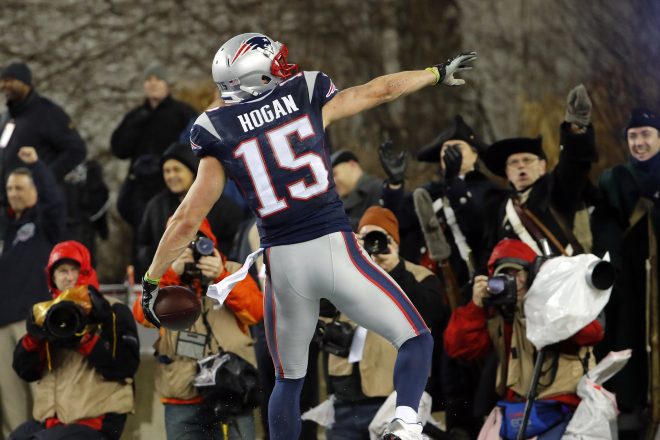 Every postseason there seems to be a new hero that emerges and the 2016/17 edition has featured some terrific performances from receiver Chris Hogan and Sunday night certainly wasn’t any different.

Hogan had a big night against Pittsburgh, finishing the game with 9 receptions for 180 yards and two touchdowns, setting a franchise postseason record after Hogan eclipsed the mark set by former receiver Deion Branch, who finished with 153 yards back on January 14, 2006 against the Broncos in Denver.

He’s had a terrific postseason, finishing second on the team in receptions with 13 catches for 275 yards and two touchdowns, just three receptions behind Julian Edelman. He also had a solid regular season after catching 38 passes for 680 yards and four touchdowns, while also finishing tied with Washington’s DeSean Jackson for the NFL lead in average yards per reception with 17.9.

“He’s been incredible,” said Tom Brady on Hogan’s performance.  “I mean, to lead the league in average yards per catch is spectacular.  He’s made big plays for us all season and he made big plays in the biggest game of the year for us.”

Hogan played a big part in helping New England get control of the game, hauling in a 16-yard touchdown pass late in the first quarter that helped the Patriots extend their lead to 10-0 with just under 3-minutes to go in the opening quarter as they started opening up their lead against the Steelers.

“The first one, he just kind of sprung free there in the back of the end zone and I was holding the ball,” said Brady after the game.  “We had a really good blitz pick-up and I just kind of cut it loose and he was open.”

But one of the more memorable plays, even though it escaped Brady’s memory initially when he was asked about it after the game, was the flea-flicker they hit on their ensuing offensive series where Brady hit Hogan on a perfect strike from 34-yards out to put them up 17-0 with just under eight minutes to go in the half.

“It was just a great call,” said Brady.  “They were a little winded, I thought, and [I] got the pitch back from D-Lew [Dion Lewis] and I saw [Hogan] burning up the field and just laid it out there for him.  It was a great play.”

It certainly was, and it’s plays like that which are important this time of year.  This is a group that is stacked talent-wise with players like Julian Edelman, who also finished with 8-catches for 118 yards and a touchdown.  When you factor in Martellus Bennett, Danny Amendola and both pass-catching backs in James White and Dion Lewis, despite the loss of Rob Gronkowski, they’ve got arguably one of the deepest group of weapons they’ve ever brought into the postseason and Hogan is certainly one of the more explosive ones they’ve had in a while.

It’s hard to believe a relatively unknown guy they stole from Buffalo would become such a big piece of their postseason puzzle, but he’s definitely been a terrific addition.  With one game to go, he’s fit in well and looks poised to continue his run of success when the team next takes the field against Atlanta in Houston.