6 years ago at 1:17 am ET
Follow @bob_george
Posted Under: Patriots Commentary 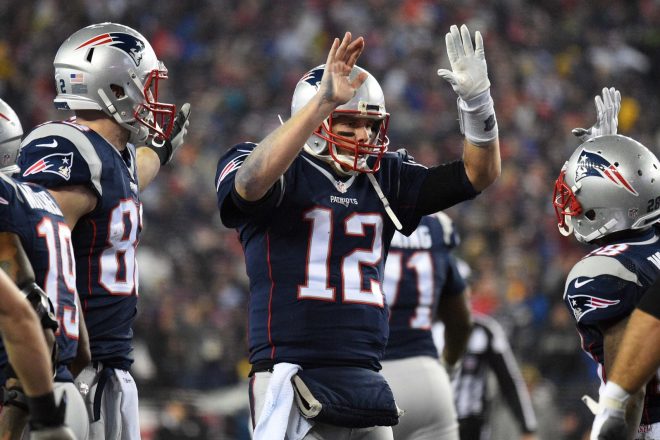 FOXBOROUGH – In 1970, the year of the AFL-NFL merger, the Patriots were a laughingstock, vagabond franchise with no stadium to call home, a strange head coach, and a savior quarterback (who came along the next year) named Jim Plunkett to lead them to the promised land.

46 years later, the Patriots have been to more Super Bowls than any other team in the NFL.

They haven’t made the trip yet, of course. But their tickets to Houston have been punched, as the Patriots pummeled the Pittsburgh Steelers 36-17 on Sunday night at Gillette Stadium, winning the AFC Championship Game and sending the Patriots to Super Bowl LI. They will play the Atlanta Falcons, 44-21 winners earlier in the day against Green Bay at home in the final game ever at the Georgia Dome.

Tom Brady and Chris Hogan set franchise records for passing and receiving yards in a postseason game. Brady threw for 384 yards, and Hogan had 180 receiving yards as the Patriots shredded the vulnerable Steeler defense pretty much all game long. The Patriot defense, not having to deal with Le’Veon Bell for most of the game, did pretty much what they had to do in limiting Antonio Brown, letting other players make some plays, none of them backbreaking, and enabling the offense to get comfortable and put their struggles from last week against Houston behind them.

The Patriots will make their ninth appearance in a Super Bowl, which is most in NFL history. They will play an Atlanta team, which is pretty much the Steelers offense times ten. The Falcons squad in only their second Super Bowl ever, is looking for their first championship. The early betting line has the Patriots as three point favorites over the Falcons. It promises to be a terrific Super Bowl, with two great quarterbacks dueling for the NFL championship.

A 16-point run by the Patriots in the third quarter more or less put this game away, aided by a lost fumble by Eli Rogers. Ben Roethlisberger did what he could despite the loss of Bell, who strained a groin muscle in the second quarter and saw only limited action all game long. His replacement, D’Angelo Williams, had some good runs including a 5-yard touchdown run in the second quarter. But the game was replete with bad coverage by the Steelers secondary, Steelers receivers dropping passes, and Brady enjoying a near-perfect game on his way to his seventh Super Bowl.

Bill Belichick decided to take the ball to start the game despite winning the coin flip, as there was a steady rain at kickoff. Brady hit Julian Edelman for a 40-yard left flat pass on the second play of the game, but the drive died at the Steelers 14 and Stephen Gostkowski kicked a field goal to give the Patriots a 3-0 lead.

Two drives later, the Steelers showed that they could not defend Brady well enough to have a chance in this game. The Patriots drove 80 yards in 11 plays, helped greatly by a 26-yard slant pass to Hogan. On third and six at the Steelers 16, Brady dropped back, rolled left, stood there seemingly forever unbothered, and then found a wide open Hogan in the end zone to make it 10-0. Hogan slipped away from Robert Golden, who seemed totally lost and flustered on the play.

In the second quarter, after Williams’ touchdown made it 10-6 (Chris Boswell missed the PAT), the Patriots took over at their own 18 and drove to the Steelers 34. After having just caught a 22-yard pass, Hogan lined up on the right side and ran a deep seam route. Brady handed off to Dion Lewis, who flipped the ball back to Brady on a flea flicker. Brady found Hogan open and a step ahead of Mike Mitchell. Brady laid the ball in there, Hogan bobbled it but made the catch to make it 17-6 Patriots. Flea Flickers are supposed to expose open receivers, but this was a case where Hogan slipped away from Mitchell and the defender could not recover.

If the Patriots are going to beat the Falcons, LeGarrette Blount won’t be the main reason why. Sunday night’s game made it clear that Blount’s effectiveness is limited to perhaps the last 20 minutes of a game. But when those last 20 minutes arrive, feed him the ball if you have the lead. After having been stuffed all night long, Blount tore off one of the more remarkable runs of the season, a 17-yard run off left tackle, which went for 17 yards down to the Steelers 2. It was remarkable because Blount dragged seven (we counted them) tacklers with him for the final ten yards. Blount took it in on the next play.

After Rogers lost a fumble on the first play of the next drive, Brady found Edelman for a ten-yard touchdown on a crossing pattern where he was left uncovered. The Patriots tallied two takeaways Sunday night, as Eric Rowe picked off Roethlisberger two drives later as Big Ben carelessly flicked a deep pass that seemed to go right to Rowe.

Brady was 32 of 42 passing, three touchdowns and a passer rating of 127.5. Hogan had 9 catches and 2 touchdowns, but Edelman chipped in with 8 catches for 118 yards and a touchdown. Roethlisberger managed 318 passing yards in defeat on 31 of 47 passing. Brown, Rogers and Williams all caught 7 passes each for 195 total yards.

One area New England had to excel in was to stop the run. Bell’s injury limited him to 20 yards on six carries, but Williams had only 34 yards on 14 carries. The two backs combined for only 2.7 yards per carry average. The plan was to limit Bell and stop Brown. Brown wasn’t stopped, but he was slowed down by Malcolm Butler enough to not hurt the Patriots.

The Patriots can now look forward to the Super Bowl, and what should be a tough game against Atlanta. Former BC quarterback Matt Ryan has the keys to the most powerful offense in the NFL. Julio Jones, Deonta Freeman and Tevin Coleman will become names mentioned quite a bit in these parts now. The game should be high scoring and very exciting.

Belichick surpassed Don Shula as the head coach with the most conference championships in league history. He and Ernie Adams will get to work right away and find a way to hold off that Falcons offense enough for Brady to deliver still another championship to the Patriots. This may present Belichick’s greatest Super Bowl challenge yet, but the Patriots did drop 28 points on the top league defense two years ago against Seattle. If anyone can overcome that Atlanta offense, it’s Belichick.

The Patriots are going to the show. Again. For the ninth time. Houston worked well 13 years ago. Two weeks of unbelievable hype awaits. Enjoy, Patriots Nation, and relish the fact that Super times are here again.