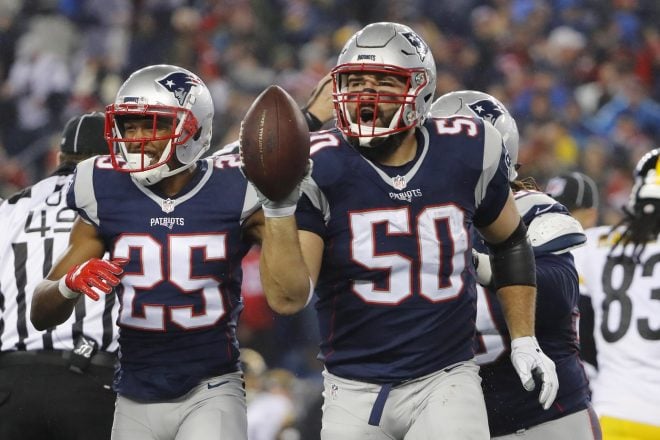 All season long critics of New England’s defense have talked about the lack of competition in terms of who they’ve faced when it came to the fact they had the league’s top-ranked scoring defense in the NFL in 2016.

Not only did they do it during the regular season, where they held teams to an average of 15.6 points-per-game, but they’ve also managed to do it in each of their two postseason games, holding teams to an average of just 16.5, which includes the 17 points they gave up to the Steelers Sunday night, good for best in the NFL again in that category.

Sunday’s win came against the likes of Ben Roethlisberger, who had already won two straight playoff games before the Steelers’ trip to Gillette Stadium.  But while Roethlisberger managed to put up 314-yards passing, New England’s defense held Pittsburgh to just 9 points before the Steelers managed to add a garbage-time score with 3:42 to go in the game.  They also forced a couple of turnovers, including an interception he threw right into the hands of Eric Rowe, which helped set up New England’s final points of the night.

Some will say that beating the Steelers doesn’t prove anything because Pittsburgh’s offense, aside from their blowout win over the Dolphins, struggled to put up points in Kansas City and then faltered again against New England.  The Steelers also have the excuse of losing lead back Le’Veon Bell, who left Sunday’s game early with a groin injury.

So you’ll likely hear that the Patriots didn’t face an elite offense.  You’ll also hear that had they faced an elite offense, they would have struggled despite facing a two-time Super Bowl champ in Roethlisberger.

But it’s really simple.  Good teams are supposed to play well against poorer competition.  If they don’t, that’s actually far more concerning. Yet all season long, this group has answered the bell, proving time and time again that they were a unit that was growing together, and now here they are, playing well at just the right time.

During the season, we’ve seen tremendous growth.  The spacing tightened.  The tackling improved.  And down in the red area, they’ve fought all year and they’ve kept teams out of the end zone. 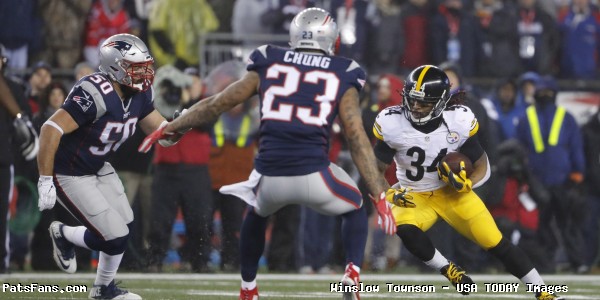 Look at Sunday’s game against the Steelers.  We saw a critical sequence that after they made a key play in the closing minutes of the first half that could have completely changed the momentum in the game.

Leading 17-6, the Steelers put together a drive that started at their own 25-yard line with 7:43 to go in the half.  After working their way down to New England’s 19-yard line, Roethlisberger connected with tight end Jesse James at the two minute warning, who had seemingly scored a touchdown after Patrick Chung and Duron Harmon brought him down near the goal line.  Replay ruled James was down at the one and the call was reversed, but with just one yard to go, it appeared the Steelers might be on the verge of getting back into the game.

But on first down, running back DeAngelo Williams was dropped for a 1-yard loss and on second down, Vincent Valentine blew up the play and broke through to drop him for a 3-yard loss.  Then on 3rd down, Roethlisberger tried to hit Eli Rogers but threw incomplete thanks to tight coverage and the Steelers would be forced to settle for a field goal.

Granted, they allowed Pittsburgh to possess the football for over 6-minutes and move 70-yards down the field, but they kept them from scoring, which is what they’ve done all year.  It’s been moments like that which have been the hallmark of this group, and that was a terrific example.

“That’s how we play defensively.  It’s all about the next play,” said Devin McCourty after the game.  “It’s all about everybody fighting hard to finish and I think that’s what we’ve been able to do.   This defense has been, I think, well-balanced with the ability to adjust to what teams are doing.”

As for who’s left, there’s just Matt Ryan and the Falcons standing in the way of this team raising the Lombardi Trophy.  However, if Ryan goes out and struggles, the naysayers will probably shift the blame to Ryan not being up to the test or his receivers not stepping up on football’s biggest stage.

But the good news is, if that happens, this time the noise will matter even less since there will be nothing but hardware and jewelry as their reward and no one left to play.

“Really, it’s just all 11 guys being attentive, being ready to make changes and trying to play well,” said McCourty.

That’s what they’ve been doing, and it’s why they’re AFC Champs.