6 years ago at 11:19 am ET
Follow @IanLogue
Posted Under: Patriots Commentary 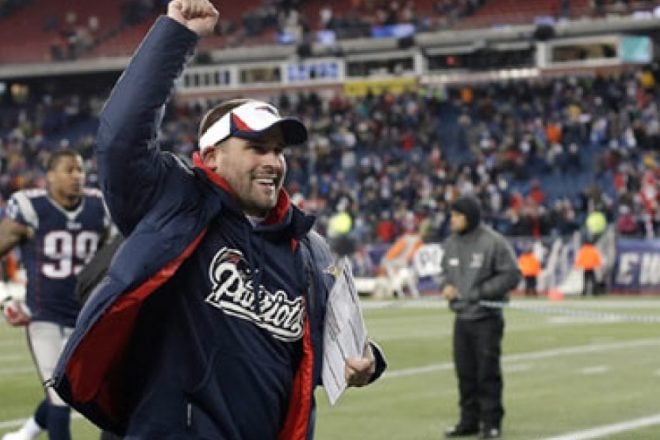 The situation in San Francisco took a bizarre turn on Sunday after the 49ers fired head coach Chip Kelly, less than one year from when they first hired him.

That opens up yet another head coaching vacancy this offseason and after also firing GM Trent Baalke, the 49ers are in a major reset as they try and turn around what has arguably been one of the stranger situations in football.  They’ve been a mess since the debacle with Jim Harbaugh that lead to his departure two seasons ago, with the two sides deciding to part ways despite two relatively successful seasons for the club.

Now it seems the 49ers would like to poach two pieces of New England’s puzzle to try and get back to being the same perennial winner that the Patriots were often compared to during their incredible run.  According to ESPN’s Adam Schefter, San Francisco has requested interviews with both Josh McDaniels to be their potential head coach, as well as Patriots Director of Player Personnel, Nick Caserio, for their GM job.

The 49ers reportedly requested permission to speak with McDaniels for their opening after the 2010 season, but reports said he declined the opportunity.  At the time he was reportedly concerned about the ownership structure, along with the addition of Trent Baalke, who had just been named general manager.  Baalke was apparently one of the problems during this recent season, with NFL.com’s Mike Garafolo reporting that head coach Chip Kelly and others in the 49ers building wanted quarterback Dak Prescott in the draft but Baalke didn’t draft him.

The potential idea of McDaniels and Caserio going in as a duo is something that might appeal to McDaniels, who has seen first hand the type of work Caserio has done as it pertains with trying to build depth at each position, as well as pulling off some smart moves mid-season.  The Michael Floyd move aside (his DUI lead to his availability and the Patriots just happened to take the chance on bringing him in), Bill Belichick recently credited Caserio for the addition of tight end Matt Lengel, who they signed off of Cincinnati’s practice squad.

“I think Nick and his staff deserve a lot of credit for identifying Matt,” Belichick said last week in a Conference call. “Again, there wasn’t a lot to go on. There are no regular season games, there’s just preseason and college film if you want to go back to that.”

Those are the types of decisions that stand out and ones that will likely make Caserio attractive to potential suitors.   It’s also something that bears watching, because he’s done a terrific job for New England’s own personnel department, setting up a roster that has done an amazing job of overcoming injuries in past seasons. His loss, especially if the Patriots lose McDaniels and/or Matt Patricia to head coach positions, would create a significant challenge for New England during the offseason.