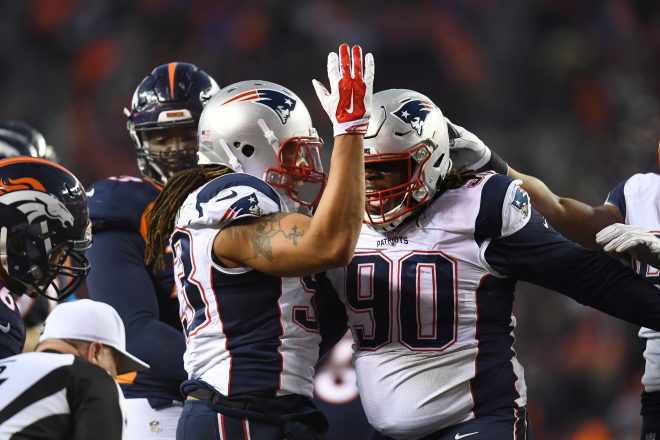 The New England Patriots entered Week 15 of the NFL season in a tight race for the AFC’s number one seed in the playoffs, with a win they would also clinch the East division title for the eighth consecutive season.

The team knew a tough challenge lied ahead against the Denver Broncos top ranked defense and a building that has historically been a “house of horrors” for the Patriots to the tone of two AFC Championship losses in the last three years.

The first quarter began with some early fireworks by the Patriots special teams unit, a bit of a reversal from the struggles against the Ravens as rookie Jonanthan Jones recovered a Jordan Norwood fumbled punt.

Quarterback Tom Brady struggled early on, starting 0 for 6 and unable to complete his first pass until the second quarter.

The #Patriots kicked a field goal and Tom Brady hasn't completed a pass. This will not happen often.

The Patriots would cash in on the turnover, 3-0 after a Stephen Gostkowski field goal midway through the first quarter.

Julian Edelman was back deep on the Patriots' first punt return of the afternoon. Finished the play by fist-bumping a ref.

The last time he went an entire first quarter without a completion was Week 15, 2009 at Bills

The Patriots offense continued to struggle to find its groove, but the defense kept the Broncos in check. Allowing a lone field goal to keep the game tied at 3 following one quarter of play.

Logan Ryan with the 42-yard interception return for the #Patriots

The first Patriots player to catch a pass in this game was Logan Ryan.

Following the turnover, Brady at last made the Broncos pay.

The short field setup the Patriots first touchdown of the game, and it was a record breaker for running back LeGarrette Blount.

.@LG_Blount scores his 15th rushing TD of the season!

LeGarrette Blount is now the Patriots single-season record holder for rushing TDs in a season, with 15. Breaks Curtis Martin's record.

The Patriots would enter halftime with a 10-3 lead.

Heading into the third quarter, Julian Edelman said some NSFW things that were captured by the CBS microphones.

Julian Edelman is willing to fist-fight every Bronco.

Interesting graphic from CBS on LeGarrette Blount and where he stands among other notable undrafted running backs. pic.twitter.com/TdiMPPGGAi

The scoring remained minimal the remainder of the game as Stephen Gostkowski tacked on two more field goals in the third and fourth quarters to bring the Patriots lead to 16-3.

Devin McCourty and the defense stifled Trevor Siemian’s offense until the final whistle.

HUGE hit by Devin McCourty forces the incompletion on 4th Down.

#Patriots scoring defense will move into 1st place in the NFL, allowing only 16.6 points/game this season.

The Patriots would leave Denver as 16-3 victors over the Broncos to go along with the AFC East championship.

#Patriots now only team in #NFL history to win 13 division titles in a 14-year span.

Holding down the East for our boy @gronk #patsnation #footballMarty #theimaginationagency

Holding down the East for our boy @gronk #patsnation #footballMarty #theimaginationagency

Champ. Gotta keep grinding. I've never really been a part of something like this. My teammates. Coaches. Trainers. The fans. The city. This shit has been an amazing ride so far. I appreciate all of the love and everyone investing in me not just as a player but as a person. I love y'all. Let's keep pushing and striving for more awesomeness. #FootballMarty #theimaginationagency #patsnation this shit is AWESOME!!!

Father and Son. Hahaha. @money_mitch26 I look like the old veteran in the locker room. Lol. So many years have gone by so fast. Everyday matters. #footballmarty