6 years ago at 10:13 pm ET
Follow @IanLogue
Posted Under: Uncategorized 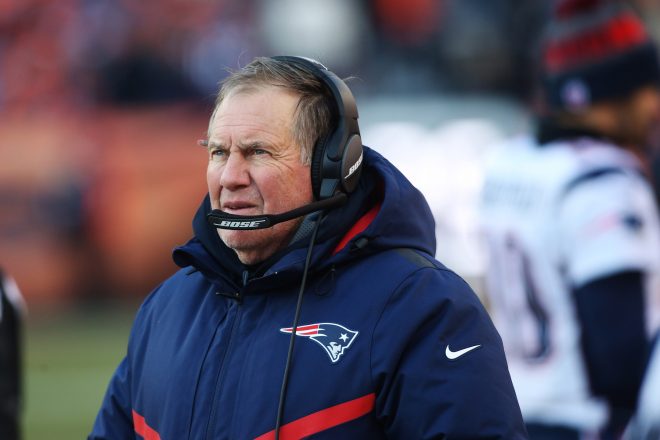 “It was a real strong effort by our team today.  Really proud of these guys.  Short week, a tough game with Baltimore Monday night, and [had to] come out here and play against a great organization like the Broncos.  It was a big challenge for us, but our players did a great job.  They prepared well and came out and played a physical game, a tough game against a tough team and I thought we deserved to win.  I thought we made enough plays to win in all three phases of the game.  Took advantage of our scoring opportunities, turned the ball over on special teams, turned it over on defense and we were able to run the ball, control a little bit of the field position on offense and, you know, 16 points was enough.  Good solid team win and this team did a good job this week.”

“Logan’s turnover was a big one because they had driven the ball from way down, I don’t know, they must have driven it, obviously the length of the field.  So that was a big turnover because it took points off the board from them in the scoring area and put us at midfield, or however far we ran it back to and then we ended up scoring on that, so that was a big play for us.  All of the turnovers were big.  Jon [Jonathan Jones] was there to take advantage of the muffed punt.  We had some big, kind of chunk plays in the passing game that we were able to move it in some 20-30 yard chunks there that helped us score, or get into field goal range I think on each of those drives. This is a tough team to move the ball against, it’s tough to go out there and convert every third down. We converted a few of them but eventually they get you, so you need some big plays in there.”

On what he thought of the running game today:

“We hung with it.  Again, it’s tough they’re a good run team, good run defense.  They’re well coached, they’ve got good players.  We just tried to bang it out.  It wasn’t a masterpiece, but it was what it needed to be.  It needed to be a lot of tough yards and that’s what we got today from Dion and LG and those guys up front.  I mean, we didn’t have a lot of negative plays in the running game, actually not a lot of negative plays, period, for us, which was a lot different than the last time we played out here.  At least we kept going forwards, or not going backwards, and that’s a good place to start.”

On the improved performance by the offensive line from the last time they were here:

“Well, again, we ran the ball well enough to be able to keep running it.  That was different from other games we’ve seen.”

On if there was something about Dion Lewis’ skillset that made him the go-to guy in this match-up:

“Yeah, we have confidence in all our backs.”

On the fact they’ve won their 8th straight AFC East titles and the fact there are guys in the locker room who have never had a chance to do that:

“It’s a huge accomplishment.  It’s a lot of hard work going all the way back to the offseason program, OTAs, training camp, a lot of tough games, won a lot of games on the road, which is always hard to do, this is another one.  But we still have more we can accomplish and our goals can now be reset.  But this is the first one, to win the Division and so that’s definitely something to be proud of, something we accomplished.  But now we can, as I said, we can reset and try to accomplish more this year.”

On how important it was to generate pressure with just 3 or 4 guys in the defensive game plan:

“Yeah, I mean, again, these guys have a very explosive team.  The receivers, the backs, they can score in a hurry from anywhere, gain a lot of yards in a hurry so it really comes down to good team defense.  Good rush, good coverage, hitting the receivers, making the quarterback hold the ball a little bit, giving the rush a chance to get there.  So I thought overall our team defense was pretty good.  We played well on third down, which was important.  We got them into third down, which was also important.  But I think it’s good team defense.  It’s the rush, it’s the coverage, it’s jamming the receivers, it’s stopping the run, it’s getting off the field on third down, it’s stopping them in the red area, it’s really, it’s all of it.  Those guys did a good job today.”

On the execution of the match-ups and if they did anything special with Malcolm Butler against Emmanuel Sanders, etc.:

“Some, yeah.  Again, we tried to mix it up.  We didn’t want to just sit there and do one thing against these guys all day.  I thought Matt [Patricia] and the defensive staff did a good job of keeping it moving, mixing things up a little bit.”

On the play of the special teams, punt return game:

“I think our specialists did a real good job.  Snapper, holder, kicker, punter, we got good plays out of all of those.  We just didn’t really get the return game started like we had hoped to.  Kickoffs or punt returns, we just looked like [we] a little bit short here or there, missed a guy or just didn’t quite have enough space to get going.  Hopefully we can break one.  We work hard on it and we’re close, but we just didn’t have too much to show for it today.”

On winning on the road on a day where Brady and Blount don’t have big statistical performances and what it says about the team:

“Well, number one, I think it starts with the turnovers.  Not turning the ball over, that’s a good place to start.  We got three turnovers defensively.  You look at almost any game in the league and you get that kind of turnover margin, it’s hard to win if you’re on the minus three and hard to lose if you’re on the plus three. So I think that overrides a lot.  But again, it’s a team game. We’ve got a lot of guys out there playing well.  We’re not interested in individual stats, we’re interested in team performance.  I thought it was good today.”

READ NEXT:
Tom Brady PostGame Transcript after the Patriots Win Over the Broncos
Posted Under: Uncategorized

By: Steve Balestrieri
“A lot of guys were getting worried because when we were in the middle of camp, we were wondering what the plan was for our…
1 day ago