6 years ago at 9:21 am ET
Follow @IanLogue
Posted Under: Uncategorized 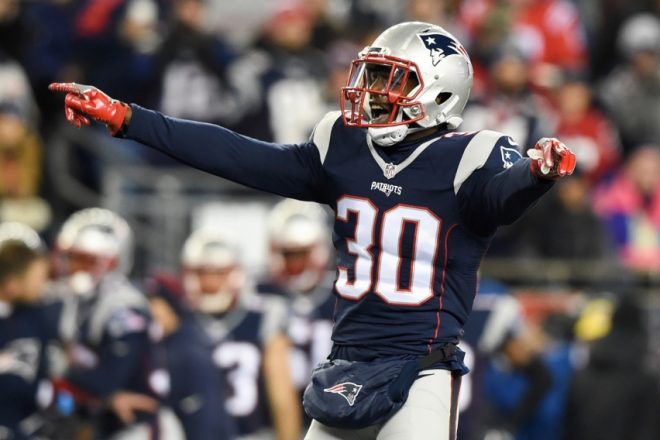 Monday night’s 30-23 win over the Ravens was definitely one of the more memorable games of the 2016 season given how it all ultimately played out, and here’s a look at a few things we came away following the victory.

1) Not exactly a banner night for Jones – If ever there was a night to forget for rookie Cyrus Jones, Monday night definitely falls into that category.  Jones finished the evening with a couple of big mental errors, one of which nearly proved costly had the Patriots not held on to win after he failed to get away from a third quarter punt that touched his foot deep in New England’s own territory and the Ravens recovered it.   To make matters worse, after the ball touched him, he then stood there and didn’t even dive on the football and Baltimore recovered it at New England’s own 3-yard line.

The most frustrating part about it is Jones narrowly escaped a similar situation earlier in the contest after the ball had almost touched him on a previous return where he also failed to get away, which easily could have ended with a similar result.  And if that wasn’t bad enough, he also got burned later in the fourth quarter in coverage on a 47-yard pass to Breshad Perriman that helped set up a field goal as the Ravens completed a 17-0 run that pulled them to within 3 at 23-20.

Bill Belichick isn’t a fan of players who are “error repeaters”, meaning guys who make the same mistakes over and over.  Between his early season ejection and his troubles returning kicks, it’s been a tough run for the rookie out of Alabama.  There will be some seeking his banishment and it’s easy to have a knee-jerk reaction and think that should be the case.  But sometimes it takes a really, really bad game for a player to get a wake up call that completely changes his approach moving forward and it’s safe to say that Jones probably endured the most humbling experience any rookie could have ever gone through.

Time will tell, but after disappearing quickly before reporters even had a shot at speaking to him, hopefully Jones does some soul-searching that will be part of a process toward eventually seeing him be a productive player.

2) Another solid night for Blount – Against a tough Ravens defense, one of the key things the Patriots could have hoped for was for LeGarrette Blount to come out and have a productive night on the ground and the veteran delivered yet again.  He carried the football 18 times for 72-yards, along with a franchise record-tying 14th touchdown.

It can’t be emphasized enough how important his performance was because the Ravens tried getting pressure on Brady and were successful on a few occasions. But the Patriots ability to go to Blount helped keep Baltimore off balance just enough to allow the veteran quarterback to have some room to work with.  One of the key examples of that was at the start of the third quarter, where Blount took a handoff and started coming up toward the line and then pitched it back to Brady, who then hit Chris Hogan for a 28-yard pass that help set up a 19-yard touchdown pass from Brady to Martellus Bennett to put them up 23-3.

But more importantly Blount was tough down the stretch, picking up a couple of critical first downs at the end of the game that helped New England run out the clock and slam the door shut on any hopes the Ravens might have had at a comeback.

His performance also put him over 1,000-yards rushing for the second time in his career and after the game, Belichick talked about the fact that he’s been a reliable force for them all season.

“He’s been really consistent for us all year,” said Belichick.  “He’s been there every day. A lot of his yards are tough yards but he’s also had some explosive plays through the course of the year, gained some yards for us in the passing game as well, which those aren’t runs but they’re kind of the same as runs if you will. He’s been very durable, very dependable. Ball security has been great so we have a lot of confidence giving him the ball. He’s done a good job for us.

3) Miscues ruined what had been a pretty good night for special teams – We talked about the frustrating night for Jones but unfortunately his woes spread to even the most experienced of veterans after even Matthew Slater wasn’t immune.  Following Jones’ miscue and the Ravens first touchdown, Slater lost the football on the ensuing kickoff and Baltimore recovered it, giving them the ball again deep in New England territory.  Four plays later the Ravens scored, and just like that, the game turned from a 23-3 rout into a 23-17 contest that now had Baltimore back in the game.

There were some bright spots, which featured a couple of terrific punts by Ryan Allen that were covered well, pinning the Ravens deep in their own end.  One of those plays included a diving Jonathan Jones, who made a tremendous diving effort to keep the ball out of the end zone, allowing New England to down it at the Baltimore 1-yard line.  One play later, the Patriots blew up the Ravens’ offensive line and tackled running back Kenneth Dixon in the backfield, dropping him in the end zone for a safety as the defense set the tone and helped grab the momentum before the mistakes started to turn the tide of the game.

Another big play was a blocked field goal by Shea McClellin, who jumped over the line, similar to how Jamie Collins did it against the Colts a year ago.  It was a huge play because it came after the Patriots failed to capitalize on the safety and could have allowed Baltimore to take back the lead.  It also snapped a streak by Ravens kicker Justin Tucker, who had hit 35-consecutive field goals, which was the 5th-longest streak of all time.

“Shea [McClellin]’s pretty athletic,” said Belichick after the game.  “He timed it up perfectly and made a good, clean jump and a good, clean block. Joe Judge did a great job of designing the play. We worked on it all week and just felt like we could take advantage of that and Shea really executed it perfectly, as did the guys up front. Malcom [Brown] and Alan [Branch] were charging in a way to kind of keep the pad level down for the field goal team so we could get through there.” 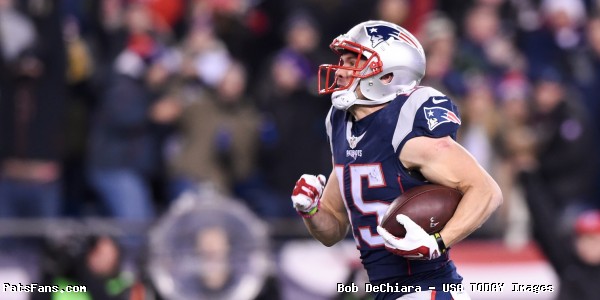 4) Huge night for Hogan – Given the loss of Rob Gronkowski and the injury to Danny Amendola, the Patriots really need someone to step up on offense to help out and Chris Hogan came through in a big way.

Hogan finished the night with five receptions for 129 yards and a touchdown, with that late scoring grab going for 79-yards as the Patriots put the dagger in the hearts of the Ravens’ players and completely stopped their momentum.  Just when it felt like Baltimore might have been on an inevitable run where the game could have really ended badly, the play put the Patriots back up by 10-points with just over six minutes to go and put New England firmly back in control of the game.

That reception was also the longest of the season for any player, and eclipsed the previous high of 63-yards, which Hogan set back in Week 5 against the Browns.  It was also Brady’s 450th career touchdown pass.

Hogan’s 100-yard performance was also the second of his career as he did it back against the Browns.

“He made a great play,” said Brady on Hogan’s touchdown.  “It was off a run fake. Hogs [Chris Hogan] and I – he was just kind of, not really the primary receiver on that play, but he saw what I saw and kind of adjusted his route and I just tried to put it out there for him. It was a big play. We needed it.”

5) Terrific night overall for the defense – While the score might not indicate it, this was arguably one of the best performances we’ve seen all year from New England’s defense.  They got pressure on Ravens quarterback Joe Flacco all night and brought him down twice, and they did a good job of getting into the backfield, including the safety they were able to get early in the game.

But overall the most notable thing was the fact that they were in the right position on quite a few plays all night, keeping the Ravens from really getting much in terms of big plays and they really swarmed to the football.  It was one of the better performances as a whole from this unit, who save for the big play made against Jones, saw them give up very few long-yardage plays.  Had the turnovers not put them in terrible situations, we might be talking a little more about the big step this group took Monday night in what might have turned into rout and a statement game against a pretty good Ravens team.

Overall, Belichick was just happy to get the win as the team will get set to turn the page with a trip out to Denver up next for his club next Sunday.

“I thought our guys really hung in there,” said Belichick.  “It wasn’t perfect. We had three turnovers, obviously hurt us. But we kept battling and made some big plays in all three areas of the game there at the end when we had to make them. That’s the important thing, is to come out of here with a win against a good football team. Like I said, it was about the game I thought we would get in terms of 60 minutes, coming down to the wire, situational plays, needing everybody, and we did.”

“It’s good to have this one. A quick turnaround, short week, trip to Denver so we’ll have to turn the page here in a hurry and get on the Broncos, but it feels good to win tonight.  Ravens are a good team. They’re tough. They do a lot of things well. We just did a few things a little bit better tonight but we’ll take it.”