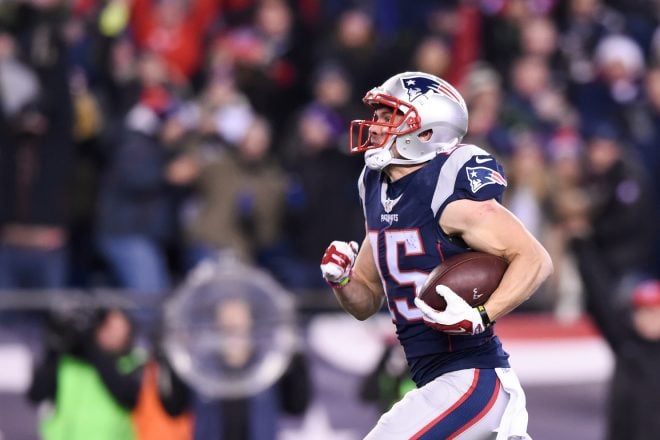 For the first time in 2016, the New England Patriots were featured on Monday Night Football against the rival Baltimore Ravens who were coming off one of their most dominant games of the season versus the Miami Dolphins.

The Ravens top ranked defense was expected to be a serious test for the Patriots offense but during pregame quarterback Tom Brady showed zero fear.

Welcome to Gillette Stadium, where the #Patriots host the Ravens at 8:30…and where Tom Brady's always jacked up for football! @ABC6 pic.twitter.com/Q3fBKiSugd

Now a member of the ESPN broadcast team, former Patriots wide receiver Randy Moss received a lot of love in his return to Foxboro.

Randy Moss and Robert Kraft catch up on the field before the game (via @westipix) pic.twitter.com/uuMNOOMJFW

"Allow me to reintroduce myself" followed by "You can hate me now" as Tom Brady comes out for warmups.I love this franchise. #UCantHideRoger

With the game underway, it was the Patriots defense that got the team on the board first with its third safety of the season.

Ravens kicker Justin Tucker had a streak of 35 consecutive made field goals coming into Monday Night, that is until linebacker Shea McClellin timed this leap to perfection and deflected away a 35 yard attempt providing Patriots fans flashbacks to Jamie Collins a year ago. The score remained 2-0 Patriots early.

Running back LeGarrette Blount scored his Patriots single season record tying 14th rushing touchdown to put the team ahead 9-0 after one quarter of play.

LeGarrette Blount ties Curtin Martin's single season record with his 14th of the season. Martin set it in 1995 and 1996.

Suggs gives Brady a little love tap after Blount's touchdown. I bet they're pen pals in the offseason. pic.twitter.com/GWnf3XmA80

They don’t call him “sweet feet” White for nothing.

The pass would set up rookie Malcolm Mitchell’s fourth touchdown catch of the season as Tom Brady continues to show trust in the young receiver. The Ravens defense was being carved up early.

For everything that went right for the Patriots in the first half, went wrong for Baltimore. Quarterback Joe Flacco struggled against the Patriots defense, including this interception to Devin McCourty.

Seeking an opportunity to put the game away before halftime, Tom Brady uncharacteristically was picked off in the end zone by Eric Weddle.

The Ravens would cash in with a field goal but the Patriots were comfortably ahead 16-3 at halftime.

The third quarter began with a bang for the Patriots, continuing where they left off in the second with this successful flea flicker.

The play setup this dime pass to Martellus Bennett on third down and it appeared the Patriots were going to turn this game into a rout.

Another 3rd down TD tonight for the Patriots. All 3 TDs have come on 3rd down. Brady threw 2 (Mitchell/Bennett) & Blount ran for the other

A 23-3 Patriots lead midway through the third had just about everyone calling this game over, but football can be cruel sometimes.

Rookie Cyrus Jones, out to return kicks in place of the injured Danny Amendola, continued to struggle at the position after committing this huge mistake that gave the Ravens a short field and needed momentum.

Get it? The ball? pic.twitter.com/ELoypcYH8C

Here's a look at Cyrus Jones stats when it comes to returns, is it time to find a new return man? #CSNstats pic.twitter.com/tEP2dGaTBz

The Ravens took over at the Patriots three yard line, and Flacco made Jones pay. 23-10 ballgame.

On the ensuing kickoff, special teams errors continued to torment the Patriots as the normally reliable Matthew Slater also fumbled the ball away giving the Ravens yet another short field, and Flacco again would coast to the end zone.

Well would ya look at that. The #Ravens were once down big, now only down 6 after this TD#BALvsNE https://t.co/rjNNAmPhdF

Seriously, though, the Patriots just gift-wrapped 14 points in about two minutes and the Ravens trail by 6 with more than 20 minutes left.

A 23-3 lead imploded into a 6 point as the Ravens found themselves only trailing 23-17 with five minutes to go in the third quarter.

Gillette Stadium, which had been loud most of the game, fell silent following the Ravens 17-0 run, that is until this…

Sarcastic cheer from the crowd as Lewis fields the kick and takes a knee. Brady back on the field after 14 quick points for the Ravens.

The Ravens tacked on another field goal to open up the fourth quarter closing the gap to three until Tom Brady did what he does best and found Chris Hogan for his longest touchdown and pass of the season. The Patriots pushed the lead back to ten at 30-20 with six minutes to go in the game.

That 79yd TD pass from Brady was also the longest pass play of the season, eclipsing Hogan's 63yd reception back in Week 5 vs Cleveland.

Silly humans think Tom Brady is one of them.

MILESTONE: That TD was Tom Brady's 450th career TD pass, making him the 4th player all-time to achieve that milestone.

Brady goes over 400 yards, his second 400-yard game of the season and ninth of his career. #BALvsNE

Welcome back to the MVP race Tom Brady! These two teams are incapable of playing a normal football game.

Down 10 with five minutes to go, the Ravens were unable to move down the field quick enough as their lack of urgency cost them in the end and the Patriots held on for a 30-23 victory.

I'm wondering if the Ravens think this is the 3rd quarter!

While also giving a shout out to Brady’s TB12 brand.

Ravens linebacker Terrell Suggs, who recorded just one tackle in the game, did his usual post game chirping as boos rained down.

Suggs: "they better hope they don't see us again"#BalvsNE pic.twitter.com/bEKDPKYLko