6 years ago at 5:00 am ET
Follow @bob_george
Posted Under: Patriots Commentary 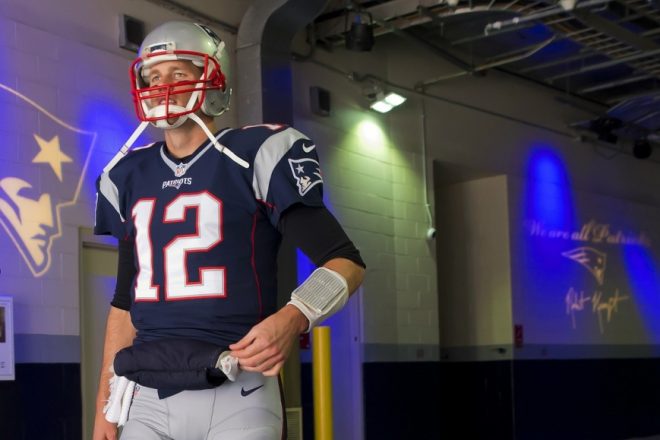 FOXBOROUGH – You hear this question all the time. What did we learn from this game?

Rams? Pathetic offense, some good players on defense. Wish we could get players like Dominique Easley.

Patriots? Not a darned thing. The Patriots won, 26-10 and barely broke a sweat. The Patriots had too many drives end in field goals. Rob Gronkowski was sorely missed. LeGarrette Blount had a 43-yard touchdown run and not much else. Once again, the Patriots have to rely heavily on Tom Brady to pull them through and…

Stop it right there.

Any discussion about this game begins and ends with TB12. In front of the 2001 Super Bowl Champion team who was honored during pregame, the only remaining active Patriot from that team became the winningest quarterback in NFL history on Sunday at Gillette Stadium. Brady won his 201st NFL game, passing former arch enemy Peyton Manning for tops in league history.

One of the Patriots from that first championship team in attendance was Drew Bledsoe, a stark reminder of how this great NFL success story named Tom Brady began. Former Jet linebacker Mo Lewis will never be remembered for his body of work, but rather for one monster hit that changed the course of NFL history, and not just Patriot history. Bledsoe suffered a punctured lung from that hit and nearly died that night in a hospital, but it became the linchpin for the greatest quarterback in NFL history to begin his legendary career, as well as his putative Hall of Fame induction when his career ends.

Brady debunked the long held NFL maxim that you cannot win a starting job due to injury. Bill Belichick was faced with the mother of all quarterback controversies, decided on Brady, let Bledsoe complain, then sat back and watched Brady become the best ever. In doing so, Brady has helped Belichick become the best ever at what he does. All Belichick lacks is the longevity of George Halas or Don Shula, but otherwise he is right there in most every important category.

Belichick made the right decision in 2001. But the coach could not possibly have forseen back then what Brady has become 16 seasons later. That decision has become, over time, the most fortuitous decision in team history, not going back to the veteran when he was cleared to return to action. Belichick will compliment Brady publicly every chance he is prevailed upon, but privately Belichick, if he speaks to any higher being, likely gives thanks every day for Brady, and for the (also) putative Hall of Fame induction he looks forward to himself.

Brady’s numbers in this historic game were good but not astounding. He competed 33 of 46 passes for 269 yards, one touchdown, and a rating of 93.5. Seven different Patriots caught a pass. Julian Edelman, Brady’s no-Gronk go-to guy, and Malcolm Mitchell, who again continues his ascent up Mount BillBradyTrust, each caught 8 passes for a total of 183 yards. Chris Hogan had the touchdown, a difficult back shoulder catch for 14 yards. The game’s high scorer was actually Stephen Gostkowski, who was a perfect 4-for-4 on field goals with three of them beyond 40 yards, as Brady wound up not being able to finish most of the drives on the afternoon against a pretty good Rams pass rush.

This game was more about Brady’s 201st victory than how great he played, and given the easy win by the Patriots, that is more than good enough. The 10-2 Patriots will keep pace with Oakland in the conference, lead the division by three games with Miami losing, and head into their tough schedule stretch brimming with confidence. But all everyone will talk about for the entire week is the fact that Brady is now the winningest quarterback of all time.

All during these last several seasons, Brady versus Manning was the catchphrase of the league (at least before DeflateGate took over). Right there in third place with 199 wins was Brett Favre, who beat the Patriots in Super Bowl XXXI as a Packer and who remains the epitome of the athlete who hung on way too long and never should have retired as often as he did. Favre sent out a video message congratulating Brady and called him the “best ever”. Manning is still oversaturated with those ridiculous commercials, and did retire a winner, but all talk about him being the best ever should cease permanently.

Brady is in such animal shape for age 39 that he shows no signs of breaking down or wearing down. There is absolutely no physical evidence that would lead you to say “He will retire by (fill in the year)” and wager a hundred dollars on it. His zeal for the game is as powerful as ever, his game preparation still nonpareil, his team leadership still evident and strong.

The Red Sox have/had two 40-something performers, David Ortiz and Koji Uehara. Big Papi is now retired. The Red Sox may bring Uehara back. Ortiz’s painful lower extremities finally forced him to quit. Uehara is still a very good pitcher but a sometimes physical liability. In terms of conditioning and body condition at/near age 40, Brady blows both of them away.

Boston area fans are lucky to have had players who transcend everyone and everything else in their sport. The Red Sox had Ted Williams, and some think Ortiz is in his category. The Bruins had Bobby Orr, the Celtics had Bill Russell and Larry Bird. And the Patriots have Brady. Brady is the only such player who is still mentioned in the present tense instead of the past.

Grandparents and great-grandparents should be treasured by young folk for as long as they live. They are family icons and are very important to you just because of the mere fact that they are still alive. She bore a child, who bore a child, who bore you. With players like Brady, it’s not quite the same thing, but it’s close. Brady is a treasure, much more than simply an immortal player.

Patriot Nation is fortunate that Brady’s career is still open-ended. He has no retirement plans in the offing. Not to overstate the obvious, but every Patriot fan that draws a breath should be grateful to bear witness to this great career, to cherish every moment Brady continues to play, and when the day comes when Brady’s Patriot career comes to and end, to never forget what you saw and how you felt over this long period of time.

Sometimes the Mount Rushmore metaphor comes up. In New England, Brady is one of them. In the entire history of NFL players, he’s one of them too.

READ NEXT:
Brady, Patriots Turn Back the Clock to 2001 in Win Over LA
Posted Under: Patriots Commentary