6 years ago at 5:00 am ET
Follow @bob_george
Posted Under: Uncategorized 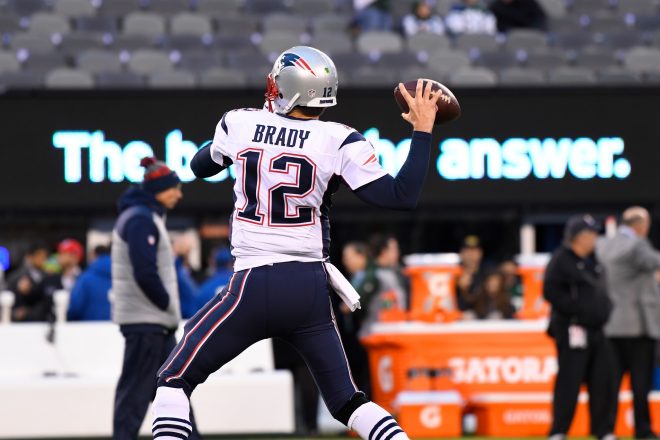 E. RUTHERFORD, N.J. – How many times does this ring true. Make more plays than the other guys and you win.

Basically, the Patriots still don’t look like a Super Bowl contender, even though they are currently second in the AFC going into Sunday’s game against the Jets at MetLife Stadium. The defense is still not elite, the Patriots have some key injuries, the running game is good but not great, and opponents seem to play their best game of the season against the Patriots. Add to that a divisional opponent on the road, and the Patriots have a much tougher opponent in the Jets than you might see on paper.

And yet the game came down to the Patriots making plays and the Jets not making plays. The Patriots managed to vanquish the Jets, 22-17, sealing the win with a late touchdown pass from Tom Brady to Malcolm Mitchell and a strip sack of Harvard’s Ryan Fitzpatrick by Chris Long. The Patriots improved to 9-2 on the season, trailing only the Raiders in the AFC standings based on the strength of victory tiebreaker.

Brady seemed off kilter for much of the game. He also lost Rob Gronkowski in the second quarter and also almost lost his other tight end, Martellus Bennett. Brady seems to still be feeling the effects of his knee injury he sustained two weeks ago against Seattle, which led to his several limited/missing practices this week. Gronkowski was also injured in the Seattle game (lung), was held out of the 49ers game last week, and played in only two series this week. Brady had several misfires on the afternoon, and finished with 30 of 50 passing and a rating of only 89.2.

Other players had to step up on offense. Most noteworthy was Mitchell, who continues to move up the Brady trust ladder, and you perhaps can include the ladders of Bill Belichick and Josh McDaniels as well. Mitchell, who sustained the grisly wrist injury in the preseason and was feared lost for the season, caught both Brady touchdown passes and had five catches for 42 yards. Julian Edelman had more catches and yards, but Mitchell seemed more clutch. Edelman had two drops, whereas Mitchell was more the “go-to guy” type.

Dion Lewis continued his reacquaintance with the Patriot offense, with 56 all-purpose yards on 10 touches. Chris Hogan hauled in a critical 25-yard pass on the final drive of the game, and also attempted a double pass to Mitchell that resulted in a pass interference call on Darryl Roberts in the second quarter. Another unlikely hero was Cameron Fleming, who often checked in as a tackle-eligible receiver but who provided some yeoman work with edge blocking in Gronkowski’s absence.

Brady is still the straw that stirs the drink. Without overstating the obvious, he is still the one quarterback you want if you want to win a tough battle. The Patriots trailed early, 10-0, and in the fourth quarter, 17-13, but Brady never let it get worse than that and kept the game manageable until it came time to win the game. And when it mattered, Brady did what he had to do to win and Fitzpatrick did not.

After a miracle catch by Quincy Enunwa for a 22-yard touchdown with Malcolm Butler in good coverage made it 17-13 Jets in the fourth quarter, Brady marched the Patriots from the 25 to the Jet 23 on four pass completions and a run. Two misfires brought on Stephen Gostkowski, who nailed a 41-yard field goal (after missing a 39-yarder wide left earlier in the contest) to make it 17-16 Jets. An intentional grounding call on Fitzpatrick killed the next Jet drive, and the Patriots got the ball back at their 17 with just over five minutes left in the game.

If you could pick the sweetest way for the Patriots to win the game, it would be to do it at the expense of their mercenary former one-year-only cornerback, Darrelle Revis. On the second play of what would be the game-winning drive, Brady found Edelman on a slant route for 24 yards, beating Revis cleanly on a good release. Brady hit Lewis for 16 yards on a left side toss pass. After two misfires, Brady hit Edelman on a quick slant, but only for six yards. It was fourth and four at the Jet 37. It was either have Gostkowski try a 54-yard field goal, punt, or go.

Belichick chose go, with Gostkowski looking on with a pained look on his face. Brady rolled right and hit James White in the right flat for the first down. The Jets blew the coverage on the next play, and Hogan was wide open in the right seam for 25 yards. On first and goal at the Jet 8, Brady hit Mitchell at the left pylon for the go-ahead score, with Revis in futile pursuit. White appeared to score on the two-point conversion on a left end run, but a replay review showed that the ball went out of bounds even though White slid by the pylon in bounds.

No matter, the Jets still needed a touchdown. On second and five from the Jet 30, Fitzpatrick dropped back for a throw into the right flat, but Long arrived before Fitzpatrick could release the ball. No tuck rule controversy here, as the ball was knocked out of Fitzpatrick’s hand by Long and covered by Trey Flowers. In his postgame press conference, Belichick used two of his favorite words, “situational football”. He was most likely referring to this play.

It didn’t seal the game, but it practically did. The Jets had two timeouts left, and the Patriots still had to get a first down. On third and two from the Jet 26, LeGarrette Blount ran left end all the way to the Jet 3, and the kneeldowns then finally ensued.

The win was the 200th in Brady’s career, tying him with old foe Peyton Manning for tops all-time. With the Rams coming to Foxborough next week, Brady will be favored to move past Manning.

The Patriot defense played good enough to win, but still has flaws. Fitzpatrick finished with 22 of 32 passing for 269 yards, two touchdowns and a 115.2 passer rating, numbers he has no business putting up against the Patriots. The Patriots could not induce Fitzpatrick into any interceptions, and he never looked flustered. Enunwa and Brandon Marshall combined for 176 receiving yards, and seemed to impose their will on Butler, Eric Rowe and Logan Ryan. On the other hand, the Patriots held the Jets to 2.8 yards per carry on the ground, stifling Matt Forte and Bilal Powell pretty consistently.

As Belichick said several times in his postgame comments, it’s a division win on the road. Always a good thing.