6 years ago at 9:13 am ET
Follow @IanLogue
Posted Under: Patriots Commentary

Sunday’s battle down in New Jersey was a tough one, but the Patriots managed to escape with their 9th win of the season after a 22-17 victory over the Jets.

Looking back, here are a few things we came away with, along with some additional thoughts heading into next week.

1) Brady never faltered despite a tough start –  Tom Brady’s performance on Sunday was shaky in the beginning, but given that the quarterback was battling a knee injury, he eventually was able to settle in and overcome whatever pain he was dealing with and lead the Patriots back against a Jets team that ended up being just as difficult as many expected.

The injury stemmed from the hit he sustained against Seattle two weeks ago, where he was struck on his lower thigh by safety Kam Chancellor, which at the time drew a roughing-the-passer penalty.  Brady was clearly in pain after the hit but he’s played on since.  According to the Boston Herald’s Jeff Howe, the swelling has since spread into Brady’s knee and has required “round-the-clock” treatment and is “swollen and nasty looking”.

Brady had a tough time in the early-going, hitting just 3-of-9 (33%) in the first quarter for 19-yards as the Jets came after him right away and forced some errant throws that sailed over his receivers.  Brady, who missed practice twice last week with his knee ailment, came into Sunday’s game having hit on 78% of his passes in the first quarter but the Jets did a good job of keeping him out of rhythm before he eventually settled down.

He came out in the second quarter and hit twelve of his next sixteen passes, finishing 12-of-16 (75%) for 98 yards and a touchdown in the second quarter as the Patriots got back into the game after trailing 10-0 and knotted things up at 10-10 at the half.  He also finished strong in the 4th quarter after going 10-of-16 (63%) for 132 yards and also threw what ended up being the game-winning touchdown, the 50th game-winning drive of his career.

Overall he finished 30-of-50 for 286 yards and two touchdowns and said after the game he was just glad they were able to make enough plays to get it done.

“It was a great win for our team. We didn’t play as well as we wanted to, but we made the plays when we needed to,” said Brady.  “It’s a Division game on the road…it’s always a tough team to play. I thought they played really well and I’m glad we just made the plays there at the end.”

Brady hit a couple of milestones in the win, including the fact it was his 200th career win, tying Peyton Manning for the all-time record as well as becoming the 5th quarterback in NFL history to go over 60,000 yards passing. 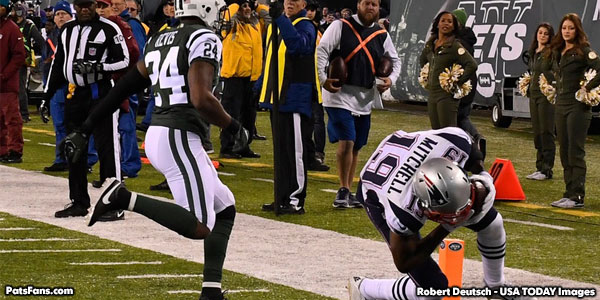 2) Another big day for Malcolm Mitchell – Malcolm Mitchell came into Sunday’s game with 11 receptions and just one touchdown, but he built off of last week’s performance by coming up big yet again for Brady and the offense.

The rookie was targeted seven times with five receptions, finishing with 42 yards and two touchdowns.  The most impressive part of his stat line is the fact that all five of his receptions went for first downs or touchdowns, capping yet another solid day for the rookie.

“I think Malcolm’s really done a great job really gaining everybody’s trust because he shows up every day, works his butt off, is so committed to the team,” said Brady after the game.  “It means a lot to him, football matters and he’s come through in the clutch. So, keep giving him opportunities.”

Mitchell caught the game-winner on New England’s final scoring drive, hauling in an 8-yard pass from Brady, beating Darrelle Revis on the play with 1:56 to go in the contest.

One of the things that stands out about Mitchell is he goes up and attacks the football, and he made a huge play on Sunday early in the second quarter on a 3rd-and-5 that helped extend the drive and eventually lead to their first points of the game.  On the play he made a leaping grab with Jets cornerback Darryl Roberts draped all over him, going up for the football and snatching it out of the air as he was hit.

Given some of the injuries they’ve been dealing with as of late, Mitchell’s ability to step up has been a big key in their success and he continues to be an unexpected bright spot so far this season.

3) Gronk’s loss certain to start whispers this week – Rob Gronkowski’s injury against the Seahawks, along with the time he missed to start the season with a hamstring injury, already had people questioning his durability and Sunday’s game against the Jets likely won’t help matters.

The veteran tight end suffered an apparent back injury after diving for a ball that was just out of his reach on a seam route early in the first quarter and then he seemed to aggravate it further on another deep route up the sideline.  He eventually left the field and headed to the locker room with just over a minute to go in the opening quarter and was initially listed as “Questionable”, before later being downgraded to “Out” for the remainder of the contest.

However, Martellus Bennett later aggravated his ankle injury after making a tough reception, going down after the play and seemingly leaving the team further depleted given Gronkowski’s earlier absence.  But Bennett later returned, gutting out the remainder of the contest and further cementing his value to the team.

Expect that comparison to be made both on local radio and television this week as the Patriots were forced to battle a tough division opponent without their best player.  As frustrating as it may have been to not have him against the Jets on Sunday, having him in January is obviously the priority.  But this marks yet another instance of Bennett’s willingness to play through the pain and it’s a parallel that will likely come up in conversation this week.  So needless to say, you’ve been warned.

4) Frustrating outing for Butler – Patriots cornerback Malcolm Butler was pushed hard on Sunday by the Jets receivers and had a tough time as he battled to keep up with Quincy Enunwa, who had a monster day that included a touchdown against him.

Overall Enunwa finished with 5 receptions on all five targets for 109 yards including a touchdown, which was a play where Butler was in position to make a play but Enunwa just made a better one.  It came on an incredible leaping grab in the end zone against Butler where Enunwa leaped high in the air to catch it, then managed to land his butt in bounds after it initially looked like he might have been ruled out when he couldn’t get both feet in.

Butler also gave up a touchdown against Brandon Marshall, which came on another great catch by the Jets’ veteran wideout.

As Jeff Howe of the Boston Herald pointed out, it’s the first time in Butler’s career he’s ever allowed two touchdowns in the same game.  As a result, after the contest Butler wasn’t happy about it.

“Just got to learn from it, be pissed off about it and put it into next week,” Butler told Howe after the game.  “That’s all I can do.”

But Butler should be pretty pleased with himself after he forced a key fumble in the second quarter that eventually resulted in a touchdown, which tied the score at 10-10 heading into the locker room at the half.  It was one of two turnovers, the second of which was a key strip by Chris Long on the Jets’ final drive that helped seal the game for the Patriots.

It’s been a while since the team had two takeaways, and Belichick admitted they were big in helping the Patriots get their 9th win of the season.

“That was what we needed to do,” said Belichick.  “Malcolm [Butler] had a big play on the strip. Chris Long, and the blocked field goal, kept points off the board there, so those were all big plays for us. We had a few stops on third down that we needed at different points in the game. Not as many as we would liked to have had, but we made some key ones.”

“Again, they made some great catches. I mean, Fitzpatrick, Enunwah, Marshall, I mean those guys made some great plays where were in pretty good position but it was just too good of a throw against a big target with great hands. You’ve got to give them credit on some of those too.”

5) Final Battle Against Fitzpatrick? – If this is the Patriots last game against Ryan Fitzpatrick, he’ll get to walk away knowing he played a pretty good game against New England’s defense.

Everyone expected the Patriots to get the better of the veteran quarterback this week, but he surprised everyone by going out and finishing with one of his best statistical games of the season.

Fitzpatrick finished the afternoon 22-of-32 (69%) for 269 yards and two touchdowns as the Jets put up 333 yards in total offense, as well as completing his only red zone pass attempt, which was a touchdown to Brandon Marshall.

He also finished 6-of-9 on third down but despite all that, the Jets managed just 16 points. While many had hoped Sunday’s game would have been a key opportunity for the defense to force a couple of interceptions, Fitzpatrick still committed the key turnover of the game when Long came in from the left side and swiped the ball out of the quarterback’s hands, which halted any shot at a comeback by the Jets and essentially sealed the game for New England.

Unfortunately for Fitzpatrick, it may have been his final start for the Jets as down in New York, with the team out of the playoff picture, everyone now is calling for second-year back-up Bryce Petty to get an opportunity.  As a result, that may be something to keep an eye on over the next few weeks as the Patriots will face the Jets again on Christmas Eve.