6 years ago at 7:01 am ET
Follow @SteveB7SFG
Posted Under: Patriots Commentary 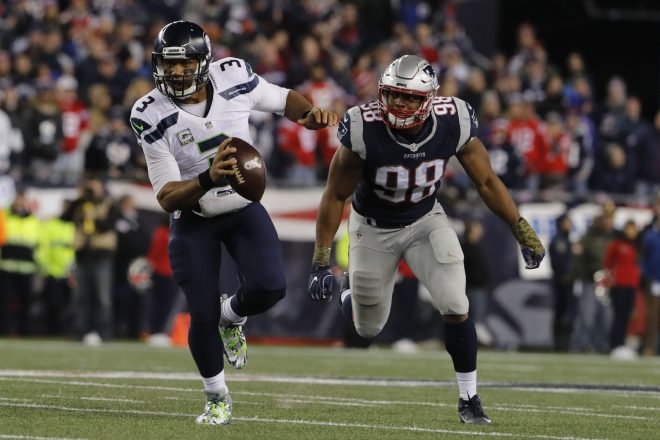 In a meeting between two of the best teams in the NFL, this one went right down to the wire. But unlike their last meeting in the Super Bowl two years ago, it was the Seahawks who turned away the Patriots on the one-yard line in a 31-24 win on SNF.

The Patriots made too many mistakes including a couple of turnovers and nearly had a third, which hurt them on a night where Russell Wilson was filleting their defense. The Patriots entered the game with the second-ranked scoring defense in the league. It looked like anything but, on a night where they couldn’t slow down Seattle’s offense.

But after a big catch by Rob Gronkowski down to the 2-yard line with about a minute to go, the Patriots had four shots to put together the tying score and send this one to overtime. This is where Seattle’s defense put together an impressive stand and Tom Brady’s pass to Rob Gronkowski on a fade in the back corner of the end zone fell incomplete. There was plenty of contact as the two physical players collided just inside the end zone. But both players tumbled to the ground as Brady’s pass fell harmlessly away.

This was a bit of sweet revenge for Pete Carroll and the Seahawks who had that happen to them at the end of Super Bowl XLIX when Malcolm Butler picked off Wilson to ice away a 4th quarter comeback by the Patriots.

Some quick observations from the game are here:

The Patriots started quickly on offense. After taking the opening kickoff, Brady drove them nicely down the field, mixing in the run and pass followed by LeGarrette Blount powering it in from a yard out to make it 7-0.

From there the sledding got much tougher for the offense and Seattle intercepted Brady for the first time in 2016 and held him without a touchdown pass. His pick seemed like either a bad decision to uncork one deep for Malcolm Mitchell or a misfire as the ball was well underthrown and was easily intercepted.

But the defense seemed incapable of putting together any kind of stops and despite tightening up in the red zone the Seahawks scored on three of their first four possessions to take a 12-7 lead.

The offense which sputtered after the opening touchdown, then put together another nice drive where Blount, who had three scores on the night, notched his second with one of the most impressive one-yard runs that you’ll see. He was stopped just short of the goal line but kept pushing to his right before finally powering in for a 14-12 Patriots lead with just over a minute to go in the half.

Russell Wilson had all three timeouts and time to get down the field to try to put Seattle back on top at the half. It was time for more Super Bowl déjà vu’ for this game. Just like in that one where Wilson sliced and diced the Patriots in a too easy scoring drive, he did it again.

He found a willing accomplice in Patriots defensive coordinator Matt Patricia. The Patriots retreated to deep zone coverages and rushed three and at times only two. Wilson had plenty of time to extend plays which resulted in blown coverages and wide open receivers. The final play found Doug Baldwin ridiculously wide open for a touchdown just prior to the half and the Seahawks went into intermission with a 19-14 lead.

Of course, Patricia could see that Wilson was picking on everyone not named Malcolm Butler. He took turns on Justin Coleman who gave up a 36-yard pass play to Tyler Lockett on Seattle’s first drive and whistled for a penalty on third down (how many times have we heard this year?) that extended a drive from inside the Seattle 30-yard line and again led to a score.

Eric Rowe was inactive tonight after getting picked on a bit the past two games. Coleman didn’t do much to turn the heads of the coaches in a positive way. To add insult to injury he was then flagged for a clipping call which wiped out a nice 21-yard punt return by Cyrus Jones in the third quarter.

Logan Ryan fared little better. Whenever Wilson needed a completion, he looked to either Coleman or Ryan’s way and invariably someone was open, and far too often on this night, they were far too open. It was an awful night for the Patriots secondary.

Seattle got the opening kickoff of the second half and initially things were looking up. The defense held Seattle to a three-and-out and Dont’a Hightower nearly picked off Wilson on third down. From there Brady led the Patriots on a 10-play, 91-yard drive (thanks to the Coleman clip), to put the Patriots up 21-19.

Blount scored his third touchdown of the night on a beautifully set up sweep to the left. The blocking was set up nicely by tight ends Rob Gronkowski and Martellus Bennett with nice lead blocking by James Develin. Blount got to the edge and was able to race along the sideline for a 13-yard touchdown. Blount’s touchdown was his 12th of the season which is tops in the NFL.

There was a scary moment on the drive when Kam Chancellor came free on a blitz. Marcus Cannon, who played a strong game at right tackle, lost his footing. Chancellor came hard at Brady and he too lost his footing and dove low attempting to sack Brady before he could throw. He hit him low around the knees which he was flagged for. Brady appeared in discomfort and was clearly in pain but could continue. There didn’t seem to be any intent to play dirty there, just one of those unfortunate turns of events.

The Patriots new found optimism was short-lived however, Wilson quickly sliced and diced his way to a field goal and a 22-21 lead. The coverage by the secondary was continuing to be suspect at best.

After a promising Patriots drive stalled at the 14-yard line and resulted in a field goal to put NE back up 24-22, the Seahawks would take the lead for good.

Wilson easily moved them down the field for another score.The key play was a 38-yard wheel route by rookie RB C.J. Prosise who burned fellow rookie LB Elandon Roberts. He got easily past Roberts and catching the nicely thrown ball was tackled at the Patriots two.

Roberts was going to be under the microscope after the Jamie Collins trade this week and he didn’t have the type of game to allay the fears the fan base had at trading away their most talented defensive player. Despite a big stop on the goal line, he wasn’t particularly effective in the running game and his struggles in coverage, which were already documented, became apparent on that big play by Prosise.

There the defense stuffed Prosise on a run and the play closely held up after a challenge. After a false start penalty on Jimmy Graham, the defense got a stop on third down where Stephen Hauschka booted a chip shot field goal to make it 25-24.

The Pats were in great position, starting at the Seattle 48. Cyrus Jones had a nice return on the kickoff before being stripped of the ball, luckily for the Patriots Nate Ebner was alert and on the spot and scooped up the ball. Once again, the optimism was short-lived however as Julian Edelman was stripped of the ball by Chancellor after a reception from Brady. Richard Sherman recovered and the Seahawks were in business.

Wilson moved easily down the short field and Baldwin toasted Ryan for a too easy 15-yard touchdown, his third of the game to make it 31-24. Carroll decided to go for two and put the game away. That attempt failed and the Patriots had a final shot to tie things up.

Brady made a couple of brilliant throws to put them in position. Facing a third and 5, he hit Edelman for a 30-yard gain and then the pass to Gronkowski, an over the shoulder throw for 34 yards put the Pats in prime position to tie things up. Blount attempted to dive over the pile but a fantastic play by Chancellor stopped him just short. Chancellor burst around the edge and got a hold of Blount’s legs, just slowing him enough.

The Patriots got too cute with another QB sneak by Brady that failed and he nearly fumbled it away. They should have stuck with Blount at that point. But credit Seattle’s defense for turning it up when they had to. The Super Bowl ending in reverse.

Edelman and Bennett had nice games for the Patriots, with seven catches for 99 yards and seven for 102 respectively. Brady finished 23 of 32 for 316 yards with no TDs and an interception. Blount carried 21 times for 69 yards and three touchdowns.

The defense easily had their worst game of the year. Wilson sliced and diced his way thru them to the tune of 25 of 37 for 348 yards and three touchdowns. Expect the Jamie Collins questions to Belichick to resume after this week’s performance. For a team that a week ago was supposed well ahead in their prep for Seattle according to Bill Belichick, they certainly didn’t look like it defensively.

Now they travel to the West Coast for a 4:25 tilt against the 49ers. This will mark Brady’s first game in his career playing in his hometown.