6 years ago at 6:41 pm ET
Follow @IanLogue
Posted Under: Uncategorized 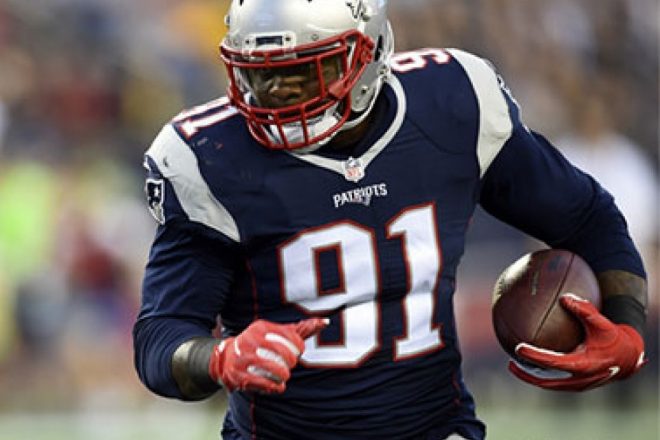 There’s never a dull moment when it comes to the Patriots, and what should have been an uneventful Monday heading into a bye week exploded after the news came out from ESPN’s Adam Schefter that Jamie Collins was being shipped off to Cleveland.

On the surface, it was a strange move given that New England opted to send the veteran linebacker to the woeful Browns in exchange for a 3rd round pick at this point in the season.  Given where they are at this point in the year, the logical choice seemingly would have been to take advantage of his services and ride out the rest of the season, rather than sacrifice an athlete of his caliber for this year in exchange for getting better in future seasons.

But this is a team that thinks long-term, and with free agency looming for Collins and a long-term deal reportedly not even close, the Patriots decided getting a third-round selection in exchange for the former second-round pick out of Southern Miss made the most sense, rather than having him potentially walk away after the year was over while getting nothing in return.

For the Browns, they now become the team who will have to figure out how to pay a player who is reportedly looking for a deal in the range of what Denver’s Von Miller signed, which puts him in a price range well out of where the Patriots were going to be.  New England is a team with an abundance of talent from top to bottom and unfortunately, they’ve reached a remarkable point where all of a sudden they’re loaded with a plethora of talented defensive players they’ll have to begin trying prioritize in terms of who they can keep for the long-term. Considering the gap between his agent and the team, the negotiations with Collins seem like they were going nowhere and that likely played a key factor.

At the end of the day, all the talk of Collins and whether or not he “freelances” or his injury problems, that’s likely not the real issue.  The bigger issue is simply the fact that this is a business and New England is content enough with who they have to sacrifice Collins for the sake of trying to ensure they can now turn their focus to other players.  Dont’a Hightower, Logan Ryan, Jabaal Sheard, Martellus Bennett are among other names whose deals expire after the season and moving Collins also allows the Patriots more flexibility as it pertains to the franchise tag, taking away one less difficult decision they’ll need to make.

It’s simple, had Collins been willing to take a team-friendly deal, it would have allowed the Patriots the room to hopefully put together another contract to ensure Dont’a Hightower could continue lining up next to him and they could have kept the duo together.  Instead, Collins can now try and get the Browns to pay up, and head coach Hue Jackson said on Monday that the veteran is part of the process of the team he’d like to build, and the hope would be to keep Collins into the future.

“I think we would love to keep him, obviously, but it has to be mutual,” said Jackson.  “Hopefully, we can move in that direction. I think it is getting him here, having him get to know us and us getting to know him. We know what he is, we know what he brings to the table and I don’t think we would have done this if we do not think there is an opportunity to move forward with him.”

In the meantime, the Patriots will get to spend the bye week adjusting their personnel to moving on without him.  With the emergence of Elandon Roberts and the acquisition of Kyle Van Noy, they seem to be comfortable with the decision.  Collins is obviously a gifted athlete and a player who won’t be forgotten here in New England, and one who fans certainly wish the best.  But that same fan base also enjoys seeing a team that consistently contends for a championship on a year-to-year basis, and Monday’s move was simply a business decision to try and ensure that can continue.

We’ve seen it before.  In Bill Belichick’s mind, it’s probably already over and he’s on to Seattle.