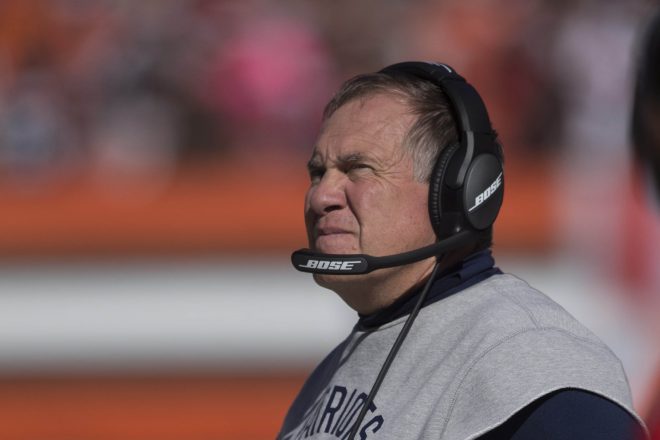 The first thoughts that pop into most fan’s minds when New England Patriots head coach Bill Belichick speaks is more often than not his typical grumpy, monotone, deep voice, and generally a lot of “umm’s” and “uhh’s” coming out of his mouth with very little details.

On Friday, Belichick was in rare form after he flipped the script and stunned nearly every media member in attendance after he spoke double his usual 15 minutes and stood at the Gillette Stadium podium for nearly a half hour.

In a final transcript that wound up to be 4,272 words, Belichick gave lengthy, descriptive answers when it came to the history of the Pittsburgh Steelers (nearly 10 minutes) while also providing a rare, in depth look into his football mind and memory bank.

Belichick raved about coaching legends Paul Brown and Chuck Noll and explained how he devoted much time in his early years to studying the Steelers “Steel Curtain” dynasty during the 1970’s.

‘[I have] tremendous respect for Chuck Noll and certainly through the whole Paul Brown connection and all… [Coach Noll] was a very intelligent guy. He had a great way of mixing football with life….Because of their consistency I’ve learned a lot from studying that organization and I think Coach Noll was just – did a tremendous job…He had great stability, very good fundamental coach. He believed in what he believed in and they got good at it…I would say learning, part of the learning tree in the early part of my career, even though I wasn’t with those coaches, I felt like I learned a lot about their programs and what they did through people that were very closely in that program.”

When the Patriots media relations staff signaled to Belichick he was running out of time, he responded saying, “I’ll take a couple more if you want. I know had a couple of long answers in there. That’s usually a problem with me. Just going on and on.”

Patriots PR wants to end press conference. Bill Belichick does not. What a morning.

When everything was all said and done, ESPN Boston’s Mike Reiss jokingly asked Belichick “Extending the play here a bit?”

To which Bill responded with a smile, “Yeah, extending the play. A little scramble.”

The Friday press conference marks the second time this week Belichick has appeared visibly happy and smiling in front of the media, he is after all a new grandfather following the birth of his son Steve Belichick’s new daughter earlier this week.

New grandfather Bill Belichick has a baby gift waiting for him at the podium today #Patriots #WBZ pic.twitter.com/xbFilK6iGO

If you’d like to hear the now-memorable press conference in its entirety, check out the link HERE.

By: Mark Morse
Shame that such a strong effort ends up with the Patriots coming up short.
41 seconds ago