6 years ago at 5:30 am ET
Follow @IanLogue
Posted Under: NFL Commentary 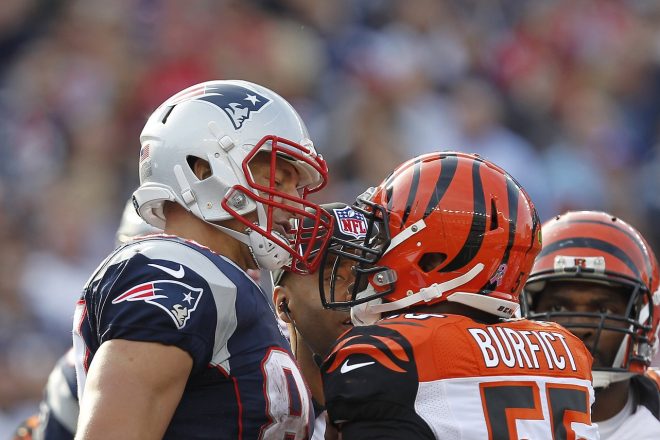 Luck runs out with everyone eventually, and Marvin Lewis is definitely one of the luckiest coaches in football.

The Bengals coach seemingly caught a big break when he was brought back in 2016 given the meltdown his team experienced back in January after Cincinnati snatched defeat from the jaws of victory against Pittsburgh in one of the ugliest postseason losses in NFL history.  For anyone who watched that game, it was one of the most painful outcomes in recent memory and happened simply thanks to ridiculous penalties by a completely undisciplined club, who gave away what would have been Lewis’ first career playoff win.

Discipline, or the lack thereof, was the big story after that loss and given that it dropped him to 0-7 all time in time postseason as Bengals head coach, it was hard not to wonder given the fact Cincinnati hasn’t ever been able to get to the next level with Lewis at the helm, whether or not they’d finally make a change.

They didn’t, and Lewis received a gift when Bengals owner Mike Brown gave him yet another chance.

That’s great news here in New England, as it means the road through the AFC will remain a little easier as long as he’s coaching should these two clubs meet again this year.  But it’s bad news if you’re a Bengals fan, because after having gotten close on two occasions back in the 80s, they’ve still never had the opportunity to know what it’s like to see their team hoist the Lombardi trophy.

Most fans who watched the Patriots prior to 2001 know what that feels like.  Those who jumped on the bandwagon after that can’t relate and are clueless as to what an incredible era this is here in this region, or in general.  Then you can take it one step further because anyone who came on board from 2003 forward doesn’t even know what it’s like for this team to finish a season without at least ten wins.

That’s completely insane when you really think about it and seemingly nowhere near close to reality in the salary cap era, but the Patriots have been able to build a culture that is the exception to the rule, and we’re all the richer for it.

Meanwhile, having taken a little bit of time to listen to sports radio out of Cincinnati last week before Sunday’s match-up, it’s a city full of frustration.  The expectations for that team are high and it’s a group with plenty of talent, but sitting at 2-4, they’re clearly underachieving.  They’ve got some good players on both sides of the football and given what we know here in New England, it’s hard not to wonder what kind of a team they’d be with someone like Bill Belichick at the helm.  He won 3 games with Jimmy Garoppolo and Jacoby Brissett starting at quarterback.  One would have to believe he could have done the same with Andy Dalton and some of the talent they have on defense.

The biggest thing is, they wouldn’t be undisciplined, which ultimately starts at the top and that obviously falls on Lewis.  Even as things began to escalate on Sunday as Rob Gronkowski was flagged with taunting when the Bengals, as usual, fell apart as the game began to slip away and began taking cheap shots, the difference was certainly evident.  On one side of the field was Belichick, pulling his veteran tight end aside and telling him to knock it off and taking him out for a play, while on the other, Lewis simply stood there and watched it unfold in front of him and seemingly did nothing.

After the game Lewis admitted the Bengals were their own worst enemy, telling reporters, “We continue to be our own Achilles Heel.”

This isn’t new and unfortunately for Lewis, it’s a trend that has gotten out of control.  Fans clearly realize it and they’re getting restless. They’re tired of seeing the same thing happen over and over again.  They’re looking for change and as much support as Lewis may have gotten in the past, doubt now seems to be setting in out there, which could mean that his future could finally be in doubt.

Bengals receiver Brandon LaFell, who played two seasons here in New England and won a Super Bowl with the team in 2014, told Bengals.com’s Dan Hoard that one thing the Patriots don’t do is beat themselves.

“Hardly ever,” LaFell told Hoard when asked if the Patriots ever did that. “I would say in the two years I was here, we probably beat ourselves like once out of the 32 games in the regular season.”

Listening to the Bengals players after the game, they acted like it wasn’t their fault, with Vontaze Burfict going so far as to blame the whole altercation that erupted at the end between the two teams on New England.

“They do that every game,” Burfict said via Cincinnati.com. “If you watch film, they’re always baiting everyone to do that.”

Lewis didn’t help the situation either when rather than putting a stop to it immediately by admitting it was a problem, he deflected the blame, which as the head is definitely one of the worst things he could do.

“I think both these teams seemed a little frustrated,” Lewis said, “So I don’t know if it was necessarily our guys.”

Belichick’s response to the penalty?

“The bottom line, we need fewer of those,” said Belichick.

There’s one of the key differences between these two coaches and it doesn’t take a genius to see it.

Lewis reportedly told his players after last week’s loss to Dallas to look in the mirror and figure out what they need to do better.

Maybe he should look in the mirror and realize he’s been the biggest problem with that football team, because Sunday was yet another example of why Cincinnati is still without a playoff win, let alone a championship.

Lewis has wasted 14-years of their life on a culture that has seen them become a team with one of the highest number of player arrests and endure seven postseason exits without a win, with last January’s showing as an ugly reminder of what is a huge problem that needs to finally be fixed.

But for Bengals fans, they have to know that the definition of insanity is doing the same thing over and over again while expecting different results.  Let’s face it, after 14 years of this, it’s a miracle they haven’t already lost their minds.

The bad news is, Sunday was another reminder of a problem that continues to fester and Lewis can keep pointing blame elsewhere all he wants.  As the old saying goes, “maybe it’s not everyone else, maybe it’s you.”

The sooner he figures that out, the better off the Bengals will be.  If not, hopefully the organization will make the decision for him.