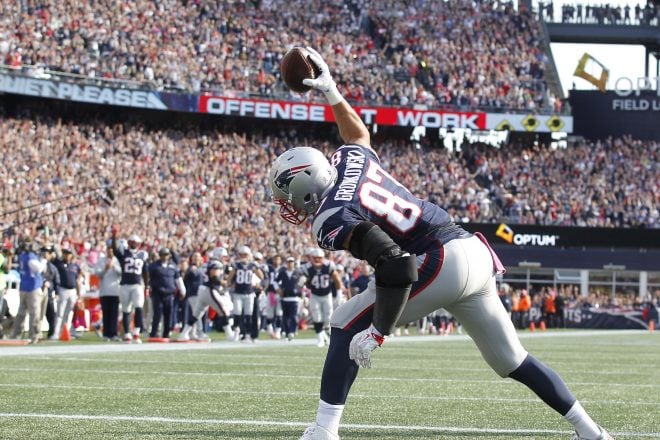 What We Learned on Sunday in the win over the Bengals

The Patriots made some key adjustments in their play-calling in the second half and the offense took off with Tom Brady, Rob Gronkowski, and James White leading the charge as New England beat Cincinnati 35-17 on Sunday at Gillette Stadium.

But it was the play of LB Dont’a Hightower who ultimately turned the game’s momentum in the Patriots favor. With Jamie Collins out with a hip injury and Jonathan Freeny placed on IR this week, the Patriots’ big man from Alabama was going to be leaned on for veteran leadership and production. And he didn’t disappoint. His tackle in the end zone on Andy Dalton for a safety flipped the game in the Patriots favor and they never looked back.

The crowd was loud and boisterous all day and wanting to see Brady in his first home game since his suspension. Brady followed up his big game in Cleveland with another gem. He completed 29 of 35 for 376 yards and three touchdowns with Gronk having a career day.

Gronkowski who missed Friday’s practice with the stomach flu was cleared this morning that he’d be good to go. And he was; Brady hooked up with Gronkowski seven times for 162 yards and a touchdown. It was a career high for Gronkowski. It was the second 100-yard effort in a row and the 22nd in his career tying him for third in NFL history.

He was virtually unstoppable in the second half. In our pregame keys, we said Gronk and Bennett along with White would be successful attacking the Bengals linebackers in space, something they struggle with. Combined, the three had 20 catches, 257 yards, and three touchdowns.

White was another key member of the offense on Sunday, when Cincinnati went all in on stopping Gronkowski and/or Bennett, White made them pay underneath, catching eight passes for 47 yards and two big touchdowns from 15 and 4 yards out. Bennett had five catches for 48 yards.

Hightower was immense on Sunday, making thirteen tackles, one of them for a loss and had 1.5 sacks of Andy Dalton. The first was possibly the turning point in the game. Down 14-10 in the third quarter, the Bengals were backed by a holding penalty. On the ensuing play, Hightower came on an A-gap blitz and sacked Dalton in the end zone. On the following drive, New England went right down the field to score and never looked back.

The game see-sawed back and forth with Cincinnati outplaying the Pats in the first half and bottling up the Patriots offense. They were able to jam the Patriots short passing game down low, forcing Brady to hold the ball and their front four was getting good pressure on Brady.

Meanwhile, Dalton was cutting a swath thru the Patriots defense. Down 3-0, Dalton drove Cincy down the field after RB Giovanni Bernard burnt LB Barkevious Mingo on a wheel route for a big play down to the NE six. But the Pats defense held and on fourth and goal, Chris Long blew up the run to the left side and Bernard was swallowed up by the linebackers and Cincy was stopped on downs.

On their next possession, Dalton again was excellent and this time ran it in from the three on an option keeper and the Bengals led 7-3. That’s when the old Bengals demons began to surface.

On a third and 18 from deep in the Patriots end at the 17, Dre Kirkpatrick got called on a brutal illegal contact penalty that gave NE an automatic first down. From there, Cincinnati’s defense went to a soft zone. Brady eviscerated them quickly marching down the field, hitting Hogan for 39 yards and then three passes to White, the final one being 15 yards for a touchdown and inexplicably the Patriots led 10-7 at the half.

Dalton led another TD drive to give Cincy back the lead 14-10 and stopped New England and had a chance to seize control of the game. But RT Cedric Ogbuehi, who we also identified in our keys as the weak link, was called for holding. That set up the Hightower sack/safety and with the score 14-12, the Pats flipped the script.

Brady led the Patriots on a 68-yard drive on five plays that the tight ends shined in. Bennett caught a big 24-yard reception, followed by a Gronk 38-yarder on a 3rd and 8. Brady hit Gronkowski for a 5-yard touchdown to put the Pats up for good 19-14.

On the ensuing drive, Brady once again led the Patriots on a quick 53-yard, 4-play drive, featuring a 38-yard pass reception by Gronkowski and an 11-yarder to Bennett. It culminated with a White four-yard touchdown reception to make the score 25-14, the extra point was no good.

The defense stepped up their play in the second half and tightened up their coverage and began to force more pressure on Dalton. Eric Rowe got in his first action and played well. Hightower and rookie LB Elandon Roberts were very impressive all day.

After the team’s traded field goals to make it 28-17, Hightower and Jabaal Sheard combined for a big third down sack on Dalton that forced a punt. Julian Edelman made a really nice punt return of 23 yards to past midfield, there Brady drove the Patriots for the final nail in Cincinnati’s coffin with a nine play, 42-yard drive with Blount taking it in for a one-yard touchdown run.

Cincinnati then did what they always seem to do in at crunch time, they melted down and started with the cheap hits and the chirping. Gronkowski had words with Adam Jones after he dove at his knees and with Vontaze Burfict as well.

Burfict, having just returned from a suspension for dirty play, dove at the back of Bennett’s knees away from the play, and will probably see a Fed Ex envelope from the league next week. Gronkowski fell into that trap and was flagged for the follow-on stupidity. Bottom line, the Bengals are an ill-disciplined lot and nothing will change anytime soon.

Vontaze Burfict going low on Bennett. Seemed unnecessary but what do I know. #Patriots pic.twitter.com/4DWnqa76TD

The Patriots were locked in a tough struggle today, but they made adjustments on both sides of the ball and Brady, in particular, was on fire in the second half. Gronkowski and Bennett were the big recipients of his passes and the Bengals couldn’t stop them. As a result, with Pittsburgh and Denver losing this week, New England now owns the AFC’s best record at 5-1 and that sets up a big game on the road against the Steelers next week.