Bennett Has Choice Words for His Old Team – Martellus Bennett has made it pretty clear that he’s thrilled to be a New England Patriot and it seems like he’s never been happier that Bill Belichick elected to make a move to bring him to Foxboro.

Those feelings were expressed a few weeks ago, when the veteran just gushed about his new environment.

“I’m a blue-collar football player,” Bennett said via ESPN three weeks ago. “I’m just here to play football and I’m just having a lot of fun right now with these guys. I love my teammates. I love the coaches. I love the environment and these fans and, for me, that’s all it’s really about. I haven’t had this much fun in a long time in the NFL and I think it’s making a big difference for me.”

On Sunday he had another big afternoon, finishing with six receptions for 67-yards and 3 touchdowns during the team’s victory over Cleveland.  That now puts him second on the club in catches with 21, giving him a team-best 314-yards and a team-leading 4 touchdowns.

In an upcoming feature on ESPN’s E:60, Bennett will reportedly be appearing with his brother Michael and in the feature the Patriots tight end apparently rips his old team, blaming the Chicago Bears’ struggles on the fact the team has a “bunch of bitches” on the roster.

“That’s why we didn’t win games,” said Bennett via WEEI. “And coaches liked the bitches.”

He also went on to say that his former quarterback, Jay Cutler, “that’s not the guy that’s a leader.”

It makes sense.  He now plays with Tom Brady, so it’s obvious that he should know the difference now that he’s lining up with a 4-time Super Bowl champion.

Hoyer About to Grab A Starting Role? – Speaking of Cutler, it appears that his job isn’t necessarily a lock for him to step back into the starting role as he continues nursing a sprained right thumb.

At 1-4, the Bears are looking for answers and despite Sunday’s frustrating loss to Indianapolis, it appears the Bears may be pleased enough by what they’ve seen from former Patriots backup quarterback Brian Hoyer that he may have made enough of a case to keep Cutler on the bench.

Right now the Bears are averaging 6.3 yards per play, second-best in the NFL behind the Falcons (7.2).  They’re also 9th in the NFL in average yards per game with 372.4.  On Sunday, the Bears also put up an incredible 522 total yards of offense, which was the Bears’ highest total in 27-years.  The only problem was it only amounted to 23 points, with an untimely fourth-quarter fumble after a completion from Hoyer to Cameron Meredith with 3:38 to go in the game ending up as the difference-maker in ruining a potential come back.

The worst part was, it came with the Colts up by just three at 26-23 and it happened on their first play of that drive at the Bears’ 15-yard line.  The Colts recovered at Chicago’s 29 and added a field goal and with 2:28 left in the game, which left Hoyer having to try and drive the length of the field to score a touchdown in order to pull off a come-from-behind victory.

That didn’t happen, and the Colts held on for the win.

So far, Hoyer’s thrown for over 300 passing yards in each of his three starts and he’s put together a streak of 140 passes without an interception.  He needs to build off of that, since this could be his last real chance to seize a starting job.  Head coach John Fox needs a spark and it’s becoming obvious that Cutler’s worn out his welcome with the fans and, judging by Bennett’s comments, likely some of his teammates.

For Hoyer, time is likely running out for the veteran quarterback, who in his 8th season is with his fifth team since his time in New England ended back in 2011.  Now is a perfect opportunity for him to play well in a city desperate for good quarterback play, which could finally give him a chance to stick.

He’s had plenty of chances, now it would be great to see him finally deliver. 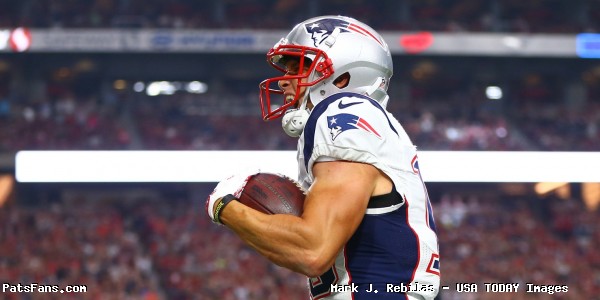 Chris Hogan is off to a great start.

Belichick Says “No One Works Harder” than Hogan and his receivers – Bill Belichick is a big fan of this phrase, and on Tuesday he threw it around quite a bit when asked about what he’s seen from receiver Chris Hogan thus far.

Belichick overall said he’s pleased with what he’s seen from this group of receivers, which could arguably be considered as one of the best he’s ever put together.

Hogan’s already off to a great start, having caught 12 receptions for 236 yards and a touchdown, putting him on a pace to finish with 48 receptions for 944 yards.  That well exceeds the 36 catches and 450 yard total he finished with during his time in Buffalo last season.  Belichick’s been impressed with Hogan’s work ethic, along with the fact he’s been able to overcome the learning curve that goes along with being a Patriots receiver.

“Chris’ situation, even though he has some NFL experience, I think some of the things we asked him to do in the passing game were new to him, maybe a little bit different in our offensive structure,” said Belichick.  “He’s worked very hard at those – the communication, the route adjustments, the technique – and has played different positions which that’s part of our offense too. As you know, moving those guys around a little bit. So there’s definitely a learning curve but he’s done a good job with that.”

Patricia Short in His Thoughts on Jones’ Ejection – Defensive coordinator Matt Patricia talked about the ejection of Cyrus Jones on Sunday, which left them without his services for the final 26-minutes of the game after Jones was kicked out of the contest just four minutes into the third quarter.

On the play, the officials said Jones threw a punch after losing his cool against wide receiver Andrew Hawkins after the two went at it away from a play where the Browns had just completed a 13-yard pass to Terrelle Pryor.  Hawkins gave Jones a hard shove that he didn’t appreciate, and the rookie was seen on the replay making contact with Hawkins’ helmet with both hands as he took him to the ground, which the officials deemed as him throwing a punch.

“It was deemed that he threw a punch,” referee Bill Vinovich told pool reporter Mike Reiss of ESPN.  “Punch and connect, you are ejected.”

Patricia was asked about the play during his conference call and sounded frustrated that it occurred, while also going on to say that it’s obviously not something they’re looking for.

“Our basic statement and the way that we coach and the way that we always want – we have to stay penalty free,” said Patricia.  “We don’t want to get penalties and we don’t want to do anything that’s going to hurt the team or cause the team to be in a bad situation, and certainly defensively we’ve got to do a great job of making sure we don’t have those penalties, whatever the situation is. That’s really all I’m going to say about that.”