The Price is Right, There is Belichick … and then Everyone Else:
Couldn’t agree more with our friend from WEEI Chris Price, who wrote this week after the blowout of the Texans that if Bill Belichick doesn’t win the NFL Coach of the Year award, the process is rigged. Well, I’ll carry that to the next step, I think he should be and very rarely is…the guy who should get the consideration every year.

This is a coach that always gets the very most out of his roster. Take a look around the NFL. You’ll see teams that are on top one year, then the next they slip a bit or get hit with the injury bug and what happens? They fall to .500 or in many cases less than that. The Patriots were decimated by injuries a year ago and they came within a missed extra point from forcing overtime in the AFC Championship Game.

No team is more consistent than the Patriots have been under Belichick. Since taking over in 2000, they’ve had double-digit winning seasons since 2003. They have the NFL’s best home AND away record during this time and have been to six Super Bowls.

So yes…the Price (Chris) is right. As Troy Brown says, “Bingo. We have BINGO here!”

Brady a System QB? Again? Yawn…Ask McCourty:
The hate for all things New England, Belichick and Brady runs deep in NFL circles. For years we heard the lame-brain argument, that “Tom Brady is a system QB” in an attempt to downplay his accomplishments.

Now because of the Deflategate suspension, the same nitwits who were rubbing their hands with glee because “New England is going 0-4 without Brady” are left trying to adjust the tinfoil on their hats. So because Jimmy Garoppolo and Jacoby Brissett have led them the Patriots to a 3-0 start, social media is rehashing the old system QB arguments because since they obviously are still winning it must mean Brady is just another guy…right?

Well, the good folks at the NFL Network asked Devin McCourty that exact question on their Good Morning Football show. McCourty’s response, though measured was priceless.

“Just a system guy? That’s wrong. Obviously, everyone knows Tom Brady’s legend. His game speaks for itself. We obviously can’t wait to have him back in the locker room, he’s the leader on our team. To say that is ridiculous (emphasis mine). Obviously, here in New England, we find ways to win. It’s a little different here without Tom but to try to say he’s a system quarterback I don’t even think you should waste your time asking questions like that.” 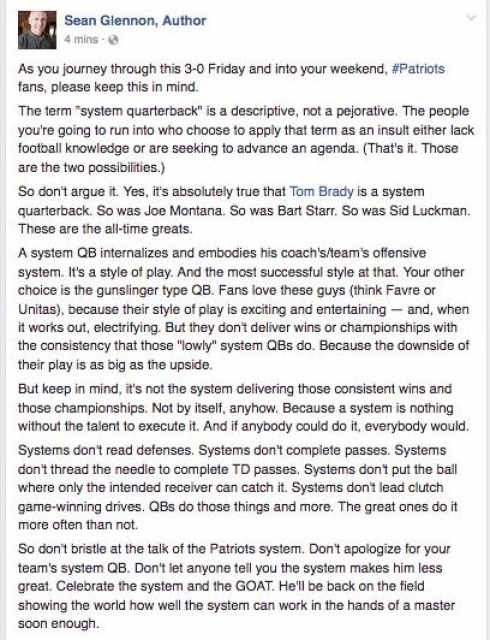 So Roger…How Was Your Week:
Much has been written this week about the Patriots hot start and with Garoppolo being injured against Miami a week ago, (doesn’t it feel like much longer now?), the feeling was the Texans were going to be able to do something that they’ve never done and that is to win in Foxboro. We knew the Commissioner wouldn’t make an appearance because he just doesn’t feel safe in Foxboro and he didn’t even tweet during the game. But this 3-0 start must really stick in his craw. This was supposed to be a punitive measure to bring those pesky Patriots back to the pack. Now, what?

The team is thriving and while the offense has barely scratched the surface of its potential, the biggest positive is that this absence of Brady, Gronk, Ninkovich, Lewis and lately Hightower has galvanized this group as a team. When Brady returns they should be even better. Thursday Night Color Rush? On Park Ave this week it was red.

Still Difficult Seeing Wilfork in Another Uniform:
One of the more difficult images that was lost in the euphoria of the Patriots big win on Thursday night was watching Vince Wilfork slowly walk off the field in his Texans uniform. It was nearly five years to the day of the Pats home opener against San Diego when he picked off Philip Rivers and rumbled down the field in the Pats win.

Jim Nantz of CBS said it best when he mentioned that the possible next time that Big Vince was on the turf at Gillette will be when he decides to retire and is placed in the Patriots Hall of Fame which is a certainty. Even though he’s now in his second season as a member of the Texans, it is hard to really picture Wilfork in any other uniform.

Fans fondly remember him and he remains a crowd favorite up here in whatever uniform he wears. Wilfork acknowledged all of the tweets and well-wishes he received this week with a message on Twitter Saturday. 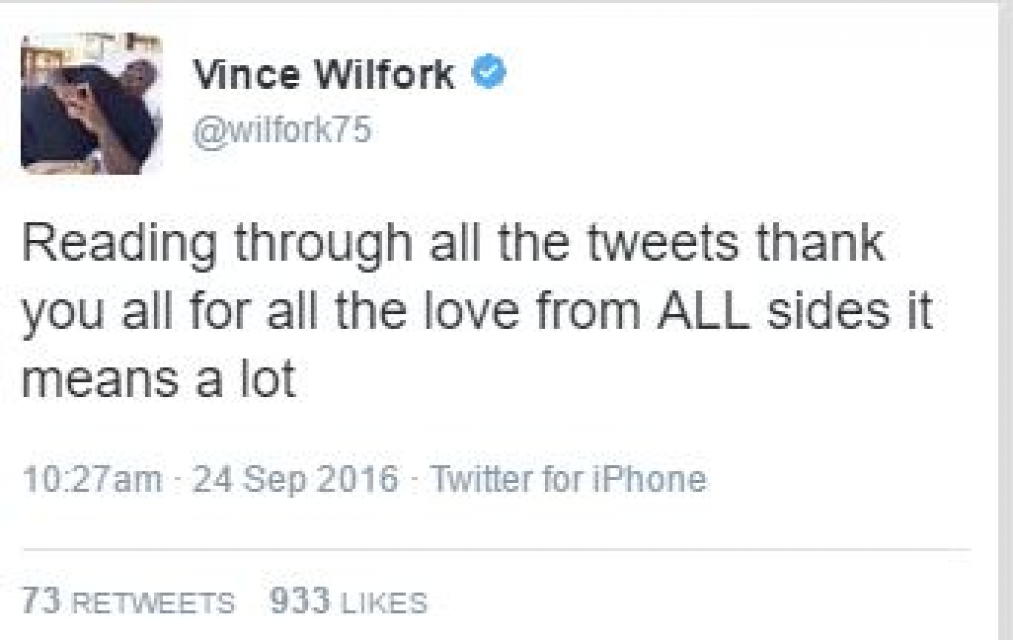 Who Do You Like This Week:
A pretty awful week (9-7) picking last week’s slate, let’s hope this week is a bit better.  I have Arizona, Carolina, Denver, Det, Jax, Miami, NYG, Tenn, Seattle, Tampa Bay, Pittsburgh, Indy, NYJ, Dallas and New Orleans for the games on tap today and Monday. Early pick for Thursday Night Football, (Cinn over Miami).

Bills Have Back-to-Back Big Games to Turn the Season Around:
Buffalo is 0-2 and the always bombastic Rex Ryan may be already wearing out his welcome in a city starved for playoff appearances. Their early schedule was a bear with a road game in Baltimore followed by a Thursday night tilt against the Jets. But now with the Arizona Cardinals coming into Buffalo and an away game next week in New England, the Bills are looking at a possible 0-4 start.

That would be unacceptable for the Bills fans and their hopes for a turnaround starts today. The Cardinals will present a tough challenge but they’ve never won in Buffalo so the Bills have to feel confident that they can get the job done.

New Offensive Coordinator Anthony Lynn has to find a way to jump start this offense, where the top running game of a year ago has been stuck in neutral. QB Tyrod Taylor has looked outstanding throwing the deep ball but has been very inaccurate overall. Look for the Bills to go up-tempo today in an attempt to get things moving. A fast start is guaranteed to get the crowd amped up and being a factor.

No Arian Foster? Dolphins Say it is an Opportunity:
The Dolphins are 0-2 and will play Cleveland today with a chance to right the ship under new coach Adam Gase who is looking for his first victory. They played the Seahawks tough, losing in the final minute on a Russell Wilson touchdown pass. Last week, they fell way behind the Patriots before mounting a comeback that fell short, 31-24. But the time for moral victories is over and there is no better time to face Cleveland.

The Browns like the Patriots are down to their 3rd string QB but don’t expect Cleveland to morph into the Pats overnight. One area that needs to turn it up is the Dolphins running game. QB Ryan Tannehill is the team’s leading rusher, so that should answer any questions about how little they’ve managed to run.

This week Arian Foster is out with an injury but rather than lament his loss, coach Gase looks at this as an opportunity for the other backs to show what they can do. “It’s going to come down to what we’re going to do for the openers,” said Gase. “We’ve got a bunch of different packages as far as who can go in when and certain things that we can emphasize with them.”

Jets Face Tough Matchup with KC and May Be Without Marshall:
The Jets have a murderous schedule for the first six weeks of the season. This week they go to Arrowhead Stadium to face the 1-1 Kansas City Chiefs. The Jets are also at 1-1 and after losing a close game at home to the Bengals, the offense exploded in a win at Buffalo. Now with New England at 3-0, the Jets need a win to stay within striking distance for the division.

Brandon Marshall is questionable for this game with knee and ankle issues and the team could really use him against the Chiefs secondary who may be hard-pressed to defend the Jets 4-WR attack. I think Marshall plays today and while he may be a bit limited in his snaps, he will play well.

Two other key areas to watch for is the Jets defensive line against an injury-ravaged KC OL. This could turn into a mismatch quickly and the Chiefs, who have been slow starters could be looking down the barrel of a gun here. The other is Special Teams. KC’s Tyreek Hill, is a freakishly fast kick returner and he can single-handedly flip field position or get the big play. He’ll bear watching today.

By: Ian Logue
Anyone who has followed the Patriots during Bill Belichick's tenure knows the ridiculously bad quarterbacks who have come and gone over the last 20-years.
2 hours ago

By: Mark Morse
Now that the season is over, it's time to look at the Patriots' roster and specifically those players that are Free Agents.
7 hours ago

By: Robert Alvarez
Kevin Faulk is elected to the College Football Hall of Fame as a member of its 2022 induction class.
18 hours ago

By: Robert Alvarez
Mac Jones shares post over Instagram reflecting on his rookie season while also voicing his appreciation for his teammates and fans.
19 hours ago

By: Robert Alvarez
Former Patriots WR Deion Branch returns to his Alma Mater University of Louisville as the director of player development.
20 hours ago