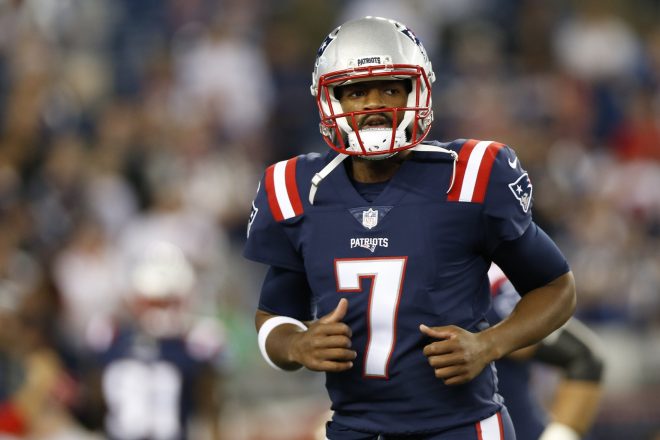 It didn’t matter that the Patriots were down to their third-string quarterback with the 2-0 Texans coming into Gillette Stadium, and after seeing New England improve to 3-0 on the season, here are some thoughts about the win.

1) Just Give Belichick “Coach of the Year” now and get it over with – Watching the masterful performances in terms of the game plans that Bill Belichick has put together in these three football games, it’s hard not to appreciate what an amazing job he’s done in helping his team overcome Tom Brady’s suspension. He’s done a terrific job with both back-up quarterbacks but Thursday night really drove the point home as Jacoby Brissett looked confident, which starts at the top when you have coaches you can believe in to put you in good situations. Given the fact that the Patriots dominated this game in all three phases, Belichick and his coaching staff clearly put together a pretty flawless game plan this week.

It will definitely go down as one of the most impressive performances of his tenure given the circumstances.  The win also saw him improve to 6-0 all-time with quarterbacks making their first ever NFL starts.  That’s not a fluke, it’s a trend and if nothing else, Thursday night’s win only further cemented the point that Roger Goodell needs to try and come to grips with.  This team doesn’t win because of psi or stealing signs, they win because they outwork and out-prepare their opponents. Thursday night proved what Belichick has built here is unbreakable, no matter how hard the commissioner may try to change that.

Needless to say, he deserves to be in the discussion for “Coach of the Year” because depending on how things unfold over the course of the rest of the season, this will definitely go down as one of the most memorable ones of his tenure.  It’s nothing short of remarkable, and if this team can stay on track and make another run with Tom Brady back at the helm, people need to just call Belichick what he is, which is the best coach of all time.  The sooner Goodell realizes that, the better off he’ll be.

2) Great job by Brissett – Given what we’ve seen from past quarterbacks Brian Hoyer and Ryan Mallett in recent years, it’s safe to say that there were plenty of reasons to be impressed with Brissett given how he played. One thing that hurt both Hoyer and Mallett were their inabilities to handle pressure and their tendencies to make poor decisions under duress.  That wasn’t the case with Brissett, who had a pretty good sense of where players were around him and did a good job eluding pressure and extending plays.  But what was even more impressive was the fact that he knew when to take the sack or throw the football away, as opposed to the Patriots’ previous quarterbacks who had a tendency to break down and make bad decisions.

Part of that is obviously coaching and Brissett is being groomed and coached by arguably one of the best staffs in the game.  But the rookie also showed off his athleticism when he broke off his 27-yard touchdown run, which adds a little different dimension to the position.  He also showed that he has plenty of room to improve after making a couple of reads where he took too long to get the ball out down in the red zone.

Overall he finished with just 103 yards passing but he outplayed a veteran quarterback in Brock Osweiler as he didn’t make any mistakes or turn the football over.  That’s about all anyone could have asked for, and the rookie should be feeling pretty good about how he played Thursday night.

3) Despite setbacks, Blount kept bringing it – One thing that was impressive about LeGarrette Blount’s rushing effort was the fact the Texans did a good job of making things difficult for him, which could have easily changed the tone of things.  Houston repeatedly stopped him for no gain or a loss and Blount never got frustrated nor did he let up and as the game wore on. His bruising style of play eventually wore the Texans down.

The veteran finished with another game where he broke the 100-yard mark, rushing for 105 yards on 24 carries along with two touchdowns, which after last week’s effort, now gives him 12 games where he’s broken the century mark for his career.  This is the player Brady will need when he comes back and fortunately, after the way he’s played thus far, Blount definitely appears to be up for the challenge.

4) Collins Lights out in Win – Collins had another great night, leading the team in tackles with nearly twice that of another player as he finished with 14 tackles, as well as an interception.  Through three games he’s been terrific and he leads the team in both tackles (23) and interceptions (2). He’s also second in passes defended (3).  Those are usually stats where defensive backs tend to hold the edge, but being the incredible athlete Collins is, he’s doing it all so far through Week 3.

5) Big Night for Jabaal Sheard – Sheard played a big factor in the win finishing with two sacks, the only ones on the night for New England’s defense.  But he was incredibly disruptive, breaking into Houston’s backfield repeatedly as he ended up with one of his best games so far this season.

6) Ryan Handled Hopkins Pretty Well – While it looked a little shaky when the Texans went after Logan Ryan early as he matched up against receiver DeAndre Hopkins, Ryan ended up coming away the winner in that match-up.  Hopkins was targeted 8 times but caught just 4 passes for 56 yards, with Ryan doing a great job of holding the Texans receiver in check during the win.

7) Allen the MVP in the win – Enough can’t be said of Ryan Allen’s performance Thursday night, with the veteran punter going out and making life miserable for Houston.  Ryan helped the Patriots dominate in the field position battle, booming six punts inside the 20 yard line, five of which he hit at the 11 or less.  He did a great job and thanks to him the Texans found themselves pinned in deep, which gave the Patriots defense plenty of room to work with and it played a huge part in keeping Houston off the scoreboard.

8) Rookie Jones Gets Lucky – It never hurts when you have the ball bounce your way and that was the case with Cyrus Jones returning punts against the Texans.  He had a fumble Thursday night but also appeared to lose the handle on another, and given the fact Houston had two big fumbles on kickoff returns which resulted in touchdowns and turned the tide of the game in New England’s favor, Jones was lucky he escaped this one without incident.  Hopefully he walks away having learned his lesson, and he was fortunate that he escaped unscathed.

9) Edelman Getting Pounded So Far -It seems like each time Julian Edelman touches the football, defenders are going at him hard this season.  He’s taken some big shots in each of New England’s three games this season, but fortunately, none have been costly.  The veteran receiver also appears to be playing with an edge, dropping his shoulder and laying out some hits of his own early on.  He had a productive night, catching four passes on six targets for 38 yards, and he also had three carries for 14 yards.  He currently has 18 catches thus far on the season for 180 yards.

10) Mitchell’s been a playmaker – So far through three games, rookie receiver Malcolm Mitchell has been able to come up with at least one big play in each of them.  He’s had a reception for at least 15 yards in each contest, catching a 28-yard pass in Week 1 in Arizona, a 15-yard grab last week against Miami, and he caught a 27-yard pass early on Thursday night that helped set up Stephen Gostkowski’s first field goal of the night to give the Patriots the lead.  He’s been a pleasant surprise so far and he runs smooth routes and has great quickness.  It’s going to be interesting to see how he evolves in the offense once Brady returns, but he’s certainly done some good things early on here at this point in the season.

By: Robert Alvarez
The Patriots show off their customized cleats for the NFL's annual "My Cause, My Cleats" campaign over Instagram.
2 hours ago

By: Russ Goldman
In this episode, we look back at the loss to the Vikings on Thanksgiving, and later on, we preview the upcoming game against the Bills.
10 hours ago