6 years ago at 8:53 am ET
Follow @IanLogue
Posted Under: Patriots Injuries 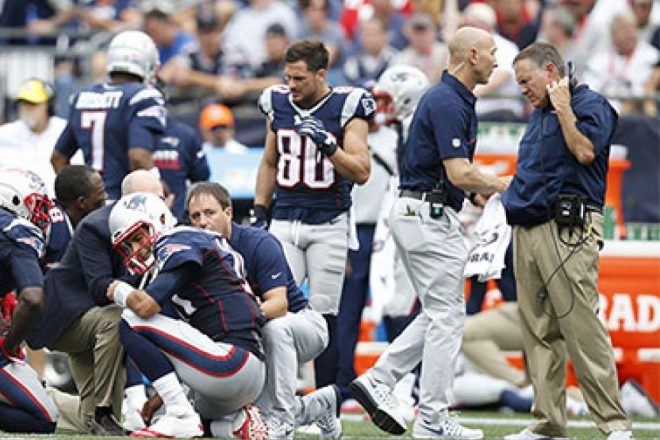 After seeing Jimmy Garoppolo in pain following the shoulder injury he suffered Sunday against Miami, it looked like it might have been the final time we saw him this season before the return of suspended quarterback Tom Brady.

Now it appears, that might not entirely be the case.

Despite the fact that rookie quarterback Jacoby Brissett seemed to be the player set to start against Houston Thursday night, according to ESPN’s Ed Werder, Garoppolo hasn’t been ruled out and could even end up shocking everyone by starting.

With two games remaining for his chance to remain the leader of this team until Brady comes back, if Werder’s report is accurate, Garoppolo doesn’t seem like he’s ready to relinquish his role just yet.  Given the hit he took, it’s hard to imagine seeing him run out of the tunnel and line up under center Thursday night.  But if he does, it will be yet another remarkable story for a guy who has done a good job making sure the first chapter of his career will go down as a memorable one.

By: Ian Logue
Heading into Monday night's match-up, if ever there was a sense of urgency, it's probably safe to say there needs to be a heightened state…
3 mins ago

By: Mark Morse
The Cardinals present a game the Patriots could win.  Their Defense is one of the worst in the league giving up 26.8 points per game…
19 mins ago

By: Robert Alvarez
The last couple weeks have been a struggle for the Patriots and their fans, so "NFL Fan Therapy" discusses the latest developments.
34 mins ago