If the Patriots make it to 3-0 going into Week 4 against the Bills, the honorary captain for that game should be Tedy Bruschi.

The man who Bill Belichick once described as the “perfect player” authored one of the best Patriot sound bytes in team history. A little over ten years ago, the Patriots were set to face the Indianapolis Colts in the 2004 AFC Divisional Game. A year prior, in the AFC Championship Game, the Patriots punched their tickets to Super Bowl XXXVIII with a 24-17 win over the same Colts at Gillette Stadium.

That game was famous for all the defensive holding penalties the Patriots “seemingly” got away with, at least according to the whining Peyton Manning. Colts GM Bill Polian took up the fight, and got the rules committee to modify the rules on defensive holding. All that really happened was that the officials were told to “look more closely” at defenders bothering opposing receivers beyond the normal five-yard limit. It’s sort of like baseball umpires being told to watch more closely for balks or to actually enforce the 20-second pitch rule when the bases are empty.

As if to thumb their noses at the rules committee, the Patriots went out in 2004 and suffocated the Colts even worse than the previous year. The Patriots throttled Manning and the Colts, 20-3 and eventually went on to win their second straight Super Bowl.

Then Bruschi went off in a postgame radio interview on the field. Here is basically what he said, in part: “We don’t talk, we play! You wanna say all you want? You wanna change the rules? Change ‘em! We still play, and we win, that’s what we do!”

Someone on the Patriots needs to do the same, extrapolated to DeflateGate.

Sunday night’s game report in this column concluded with probably the real final score on the game between the Patriots and the Cardinals: Jimmy Garoppolo 1, Roger Goodell 0. The Patriots actually defeated Arizona, 23-21. The win was important, but it was more sweet than important. Having played the game without Tom Brady was real sweet. But it was like an Easter egg basket, in that there were lots of sweets in it, not just one big delicious chocolate egg with your favorite decadent cream filling.

Bill Belichick outcoached the pants off of his opposite number, Bruce Arians. But his edge in coaching was a slaughter, not a sliver. Belichick showed once again that you can throw all sorts of obstacles at him, and he still knows this game better than anyone on the planet.

Let’s make believe this is happening at Fenway. See how well John Farrell does without Mookie Betts, Xander Bogaerts and David Ortiz in a game where it’s Clay Buchholz’s turn to start. Or, let’s play a postseason series without those first three guys.

Dare we go further and hand Doc Rivers a Celtic team minus his Big Three and then try and take on the Lakers in Game 6?

You could see how well the Bruins did in Game 7 at Vancouver, but take away Tim Thomas, Zdeno Chara and Patrice Bergeron and see what happens. 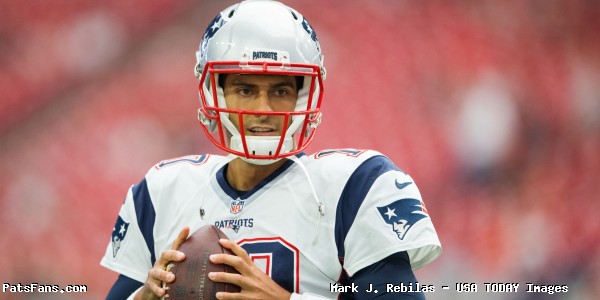 This is what Belichick had to do on Sunday night. Here he is, on the road against one of the toughest defenses in the league. His backup quarterback is making his first NFL start, who has neither his best weapon nor his blind side protection. An entire nation is watching on NBC.

Whaddaya know. A 23-21 win. Garoppolo has a passer rating north of 100. No picks. No galactically bad throws.

His truly all-world tight end (sorry, Russ Francis) is out with an injury, Belichick still wins.

The offensive line is patchwork, never mind Solder not being there, Belichick still wins.

Maybe the next time Goodell tries to use the Patriots as the supreme example makers, you should simply ignore the commish, and thumb your nose at him later when it’s shown that any punishment levied on the Patriots turns out to be much ado about nothing in the end. If the Patriots do make it through this period of the Brady suspension 4-0, or even 3-1, Belichick will have done a much bigger thing that the Federal Appeals Court in New York could ever do.

No, the Patriots are not above the law. But it should be a comfort to Patriot fans that, no matter the obstacle, Belichick is the best person to have in your corner. It has been proven time and time again. When the going gets more and more tough, the more Belichick gets going.

Of course, Brady is perhaps sitting at home hating every moment of this. He probably could not be faulted if he were not rooting for Garoppolo to do well. He took Drew Bledsoe’s job away from him when Bledsoe was sidelined for his punctured lung and never got his job back. Brady knows this all too well.

If this reporter were allowed into a Belichick press conference, I would never ask the coach “Will the quarterback position be evaluated when Brady is eligible to return?” or anything similar. Garoppolo will not be starting Week 5 at Cleveland. No chance. This is Brady’s team for the season, but Garoppolo’s for right now.

But if Garoppolo continues to play as well as he did Sunday night at home against lesser competition, the Patriots have a great chance to run the Brady suspension table. And if he does, it will go down as another brilliant Belichick coaching feat. There’s the Super Bowl XXV defensive game plan, the outcoaching of Mike Martz in Super Bowl XXXVI, and the solving of the Seattle defense in Super Bowl XLIX. This will be right up there if the Patriots can pull this off.

If the Patriots do indeed run the table, one might scrounge up a penny for Goodell’s thoughts. He nailed Brady, but should he have nailed Belichick? That sort of thing has been tried before (SpyGate), but the Patriots wound up almost running the table and came within a stupid lucky catch of going 19-0. When Goodell goes to sleep at night, does he have Brady nightmares or Belichick nightmares? Let’s say the Patriots take this thing all the way and win Super Bowl LI. You thought the Boston Strong World Series win was mythical?

One game at a time. We’re on to Miami, who almost beat Seattle on the road for openers. But right now, Patriot Nation is back on their high horse. The biggest non-Brady test was passed with flying colors. Garoppolo 1, Goodell 0. Say it again, folks.