6 years ago at 6:56 am ET
Follow @SteveB7SFG
Posted Under: Patriots Commentary 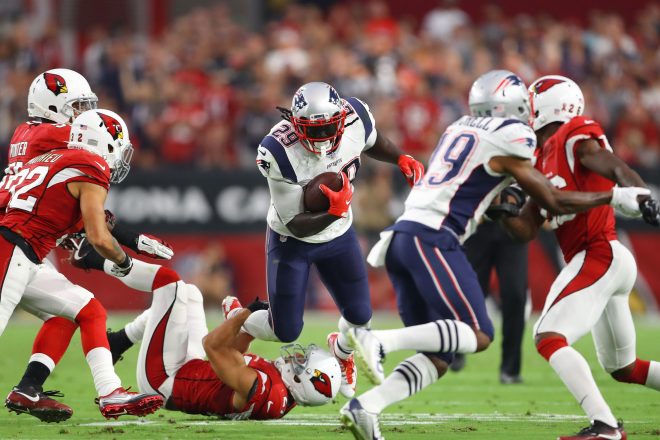 Bennett Also Stands out as a Blocker in Run/Pass Support

Reviewing the game film from the Patriots win over the Cardinals there was a number of interesting takes from seeing it a couple of more times on Monday.

Patriots Were Targeting Williams: Early in the first quarter during their first drive on the Arizona 37-yard line, the Patriots lined up in a run formation with two RB, two TEs, and one WR (22 personnel).

With the matchup of Chris Hogan on Cards rookie CB Brandon Williams, Patriots QB Jimmy Garoppolo changed the play at the line, tapping his helmet as a silent signal, something we saw in training camp and in the past with Tom Brady, they immediately changed the play to attack down the field.

Hogan did a great job of beating the press at the line and single-high safety in the middle of the field easily beat the rookie down the field. Williams was also caught further by peeking back in the backfield allowing Hogan to run free down the sideline for an all-important first score. 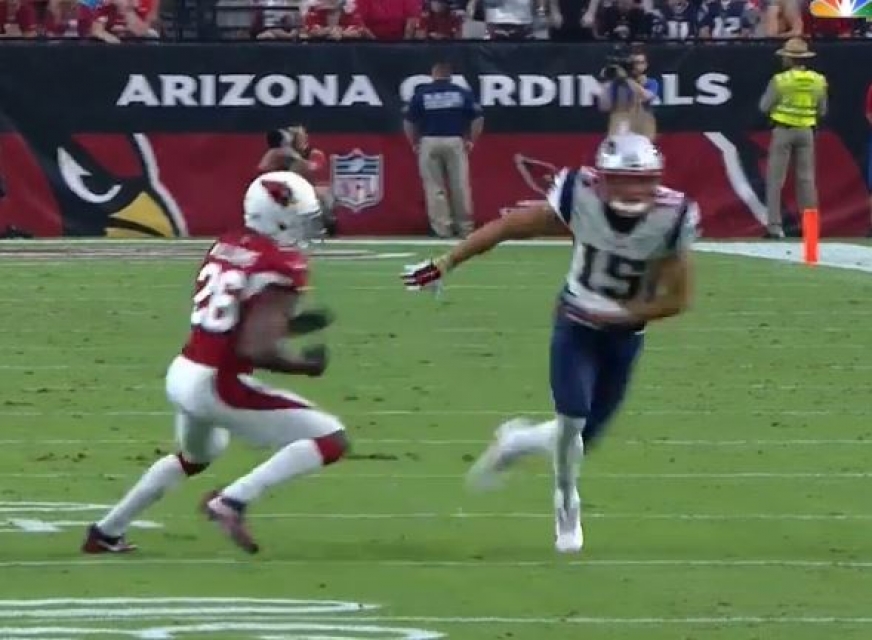 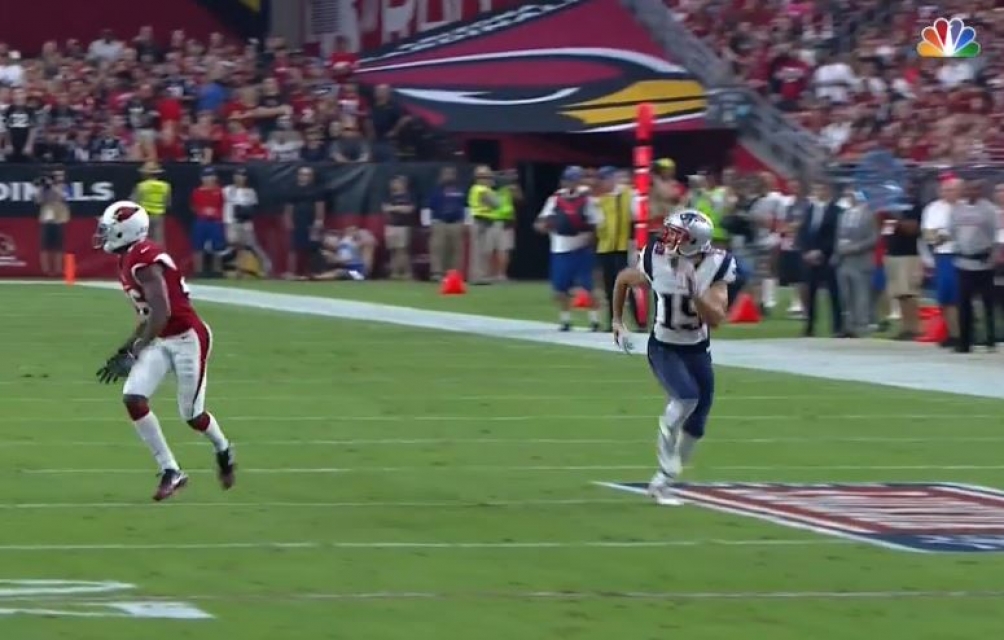 It was a superb example of the coaches and Garoppolo putting in the work in their preparation. Jimmy G. saw the 1-on-1 matchup and they went right after it. Later in the game during the 3rd quarter, they saw that matchup again and exploited it. The Cardinals coaches had to switch that up because they recognized immediately that the rookie wasn’t ready for the task yet.

Facing a 3rd and 7, the Cardinals were showing pressure and at the pre-snap Garoppolo had rookie Malcolm Mitchell lined up opposite Williams with no safety help. Mitchell ran a quick out pattern, Williams went for the block and couldn’t get there. Mitchell gathered the pass in and was able to break the tackle and raced down the left sideline for a 28-yard catch and run that set up the next score.

Bennett’s Role as a Blocker Was Key: Patriots tight end Martellus Bennett had a modest night catching the ball (3 catches, 14 yards), but stood out positively for his blocking ability. The “Unicorn” prides himself as being a complete tight end like Rob Gronkowski and the team held him in to block on about half of his snaps.

On Blount’s touchdown, left tackle Cameron Fleming targeted the linebacker at the second level, Jones slid down to fill the gap and Bennett wham blocked Jones very effectively allowing Blount to get thru the line with a head of steam where he carried several members of the defense into the end zone. 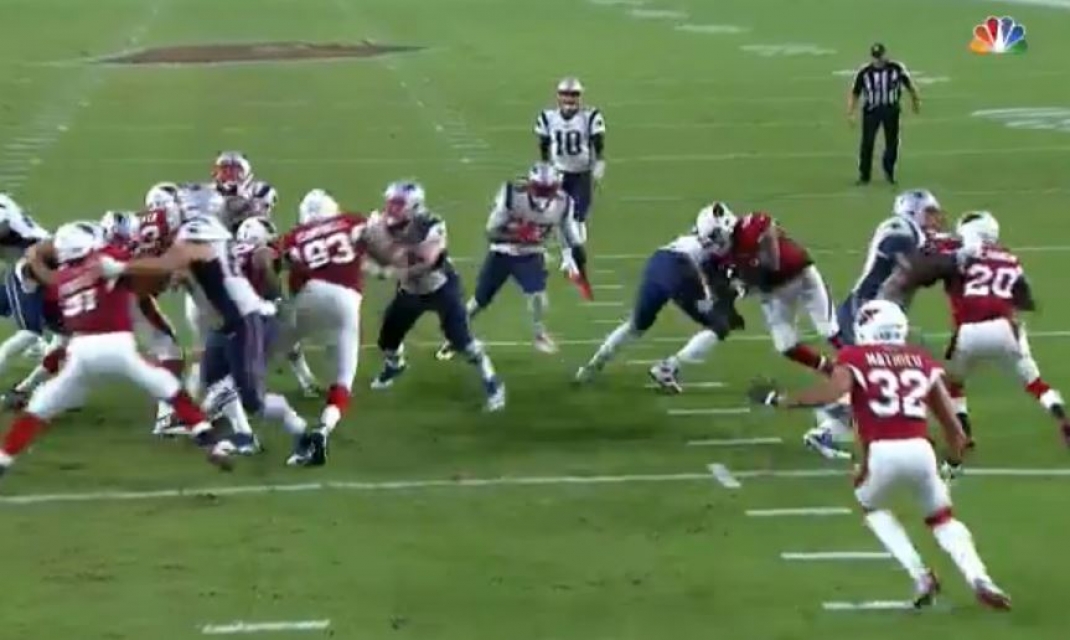 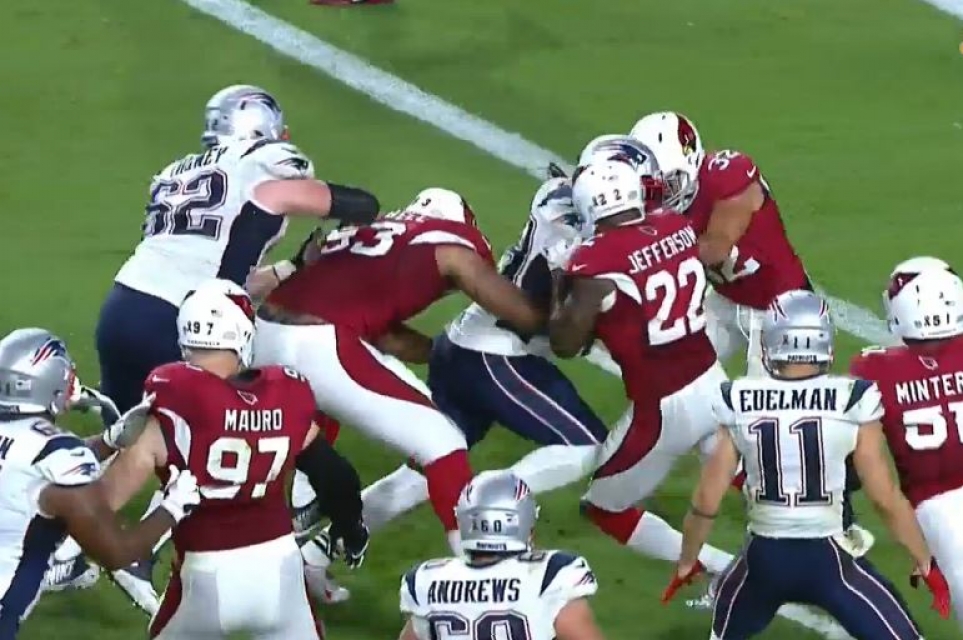 Another key play was the 3rd and 11 faced by the Patriots on their final scoring drive. Bennett was tasked with kicking the OLB (Golden) to the outside which he did with ease, allowing Blount to cut inside. D.J. Swearinger was sealed off by Joe Thuney who showed good athleticism getting to the second level. The resultant wash inside gave Blount all the space he needed. He broke a tackle by Patrick Peterson and easily made the key first down which allowed a much easier field goal and burned valuable time off the clock.

Third Down Conversions: The Patriots made a number of key third down conversions going 10-16 on the day. James White and Garroppolo hooked up one where both the QB and RB displayed some excellent precision.

Facing a 3rd and 3, White split out wide to the right. Cardinals DB Tony Jefferson was in coverage and shaded him to the inside. White was still able to quickly jump inside and used his body to effectively keep Jefferson off of him and the ball. Jimmy G. got the ball out quickly and right on the money for a key first down. Jefferson was visibly upset after the play for not being able to break it up.

Garoppolo’s best play arguably was on the Patriots final drive. Facing a 3rd and 15 from the Patriots 19-yard line and behind for the first time in the game, he converted a huge field position flip. Garoppolo was looking to his right and his pump fake froze the safeties in the middle of the field.

He then slid to his left and fired a pass deep downfield to Amendola who made a great catch, leaping up and hauling it in between three defenders for a gain of 32 yards. It was a superb display of moving the defense one way and just buying himself enough time to get the ball for the first down. 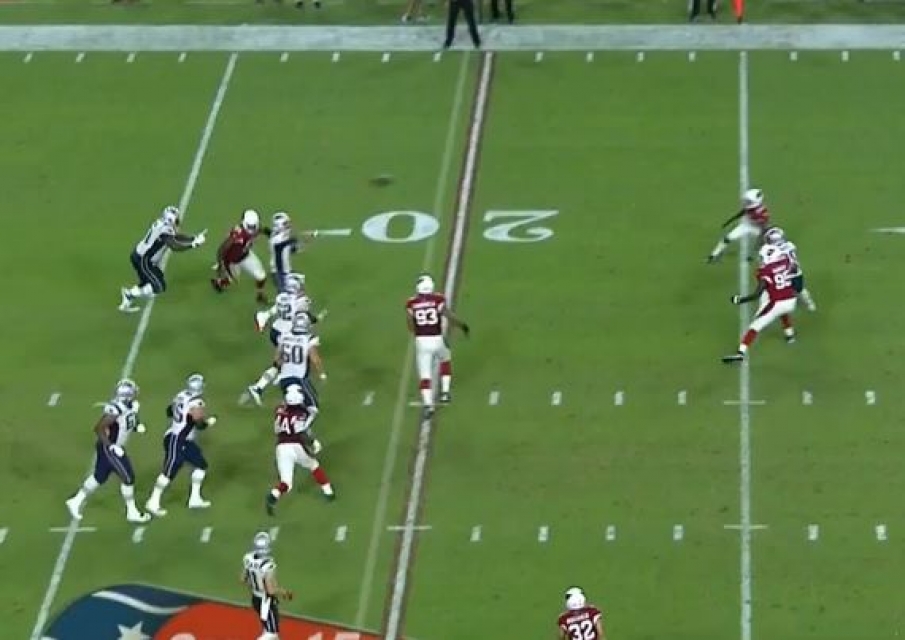 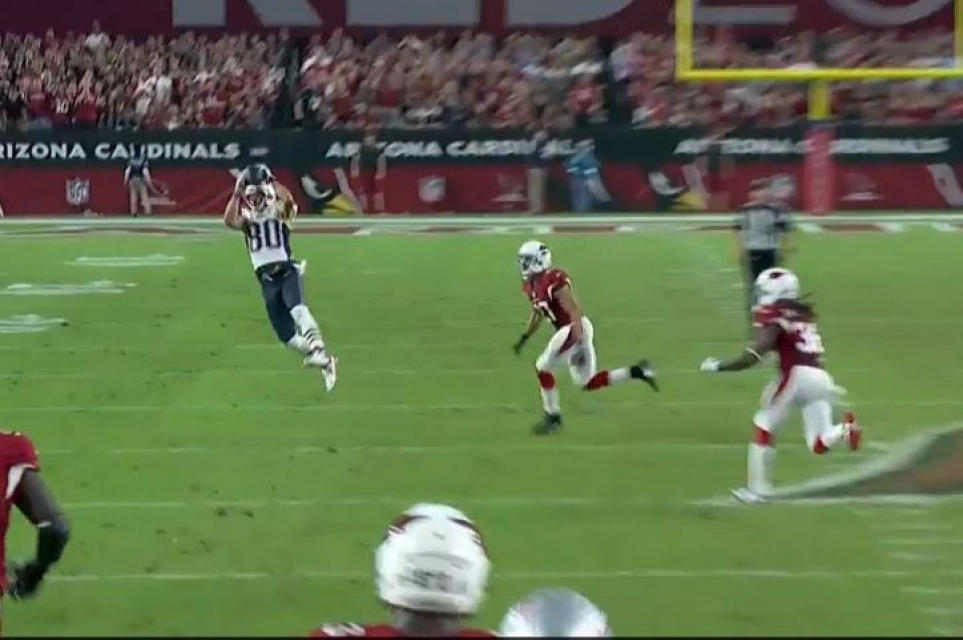 Special Teams Were Special: Last week, Bill Belichick spoke about how STs, especially early in the season can make the difference between winning and losing. Sunday night was a prime example of this. While the botched snap at the end of the game obviously affected the Cardinals final FG try, the Pats units had a stellar game.

Stephen Gostkowski hit on all five of his attempts, (2 PAT, 3 FG) but his kickoffs and the resultant coverage by the Patriots coverage units were stellar. With the new rules putting touchbacks at the 25-yard line, the Patriots, after the opening kickoff were intent on forcing the Cardinals to return their kicks.

And they did a fantastic job, using the high mortar-type kickoff, they were able to pin the Cardinals deep all night and forcing them to go the length of the field, something that was clearly frustrating. They had stops at the 11-yard line and then via penalty the 8-yard line. Fantastic opening weekend for Joe Judge’s group. We should expect to see much more of this moving forward.

Defensive Gameplan Worked: It quickly became obvious on Sunday that the Patriots plan defensively was to sit back in zone coverages and take away the big chunk plays down the field that was the hallmark of the Arizona offense in 2015.

They would drop deep and make them throw it underneath and force them to work their way slowly down the field. It worked, they held the Cardinals, who averaged over 30 points a game a year ago, to just 21 and 14 of them were on short fields due to turnovers. This was clearly frustrating Carson Palmer at times as they were unable to throw the ball deep.

It was a classic case of Bill Belichick taking away what an opponent does best and forcing them to beat you in a different way. The tackling in the secondary for the most part was really solid, somewhat surprising since the team doesn’t do a lot of that during training camp.

One other note, Larry Fitzgerald continues to amaze. While other WRs are slowing down at his age (33), he still looks at the top of his game. He makes ridiculously hard catches seem routine even when covered well.