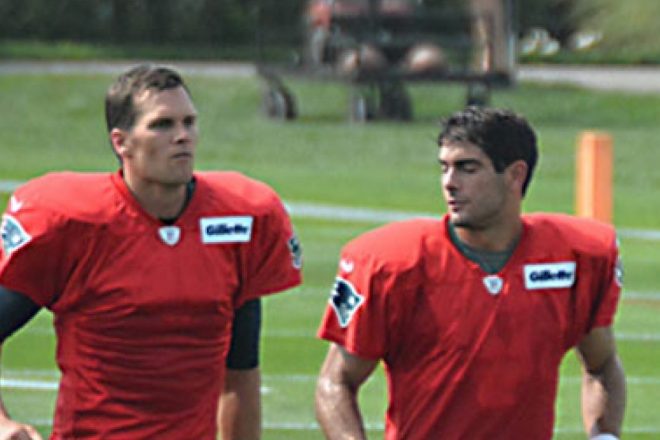 Over his first couple of seasons Jimmy Garoppolo was more of a supporting actor than a leading man, but now that he’s trying to settle into the starting role in this offense, the stakes are a bit higher for the former standout from Eastern Illinois.

By the time the Patriots take the field a little less than a month from now, Garoppolo will be on his own as Tom Brady will be barred from the team until October and Garoppolo will be the one his teammates will be looking to each week as they try and get off to a strong start for 2016.

So far, he’s handled it well, so much so that Brady recently praised Garoppolo’s leadership and the way he handles himself both in practice and in the locker room. That’s high praise from a player who, like Garoppolo, had to prove himself to this team before eventually becoming the starter and guiding them to their first championship.

Garoppolo obviously isn’t quite there yet, but to this point, he seems to have done a good job of earning the trust and respect of his teammates, and the praise from Brady is something that the third-year quarterback is appreciative of.

“It’s awesome,” said Garoppolo on Monday. “You know, Tommy is a guy that I look up to and I’ve learned a lot from him. And, you know, it’s always a privilege to hear something like that from a guy that you respect like that.”

Coming into New England, Garoppolo was no stranger to hard work. He pointed out in his first radio appearance on WEEI on Modnay that going to a small school like Eastern Illinois, it takes a lot to get noticed. However, when he arrived in New England it was a completely different experience that required him to take things to a whole new level.

But, the transition ended up being an easy one. After seeing how both Brady and the rest of the players conduct themselves, Garoppolo said it’s been an easy adjustment from top to bottom since that’s just the way things are done here.

“Yeah, I mean, you know, it’s contagious in this building,” explained Garoppolo. “It’s a great group of people in there. Coaches, staff, everybody, players, and I mean you don’t’ really have a choice but to do that, so it’s contagious.”

All of this has obviously put him in the spotlight and he’s been getting a lot of attention now that he’s “the guy” for the first four weeks. Bill Belichick said that he’s not surprised that Garoppolo has earned the respect of the guys in the locker room. According to the Patriots coach, the quarterback has been steady since he got here.

Now it’s up to Garoppolo to go out and prove he’s got what it takes, and he’s excited that after two seasons as a back-up, he’s now got that opportunity.

“You know you just got to take it in stride, really,” Garoppolo said. “You know, it’s an opportunity and I’m excited about it. It’s a privilege to be in the situation I’m in and you just got to go take advantage of it.”