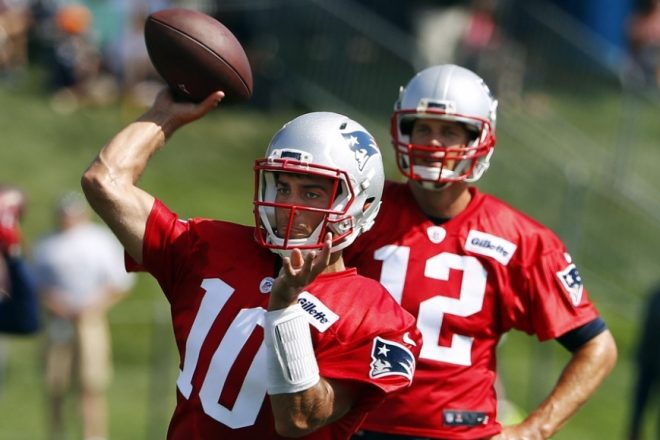 There’s no better way to learn on the job than to get as much experience as possible, and quarterback Jimmy Garoppolo appears poised to get plenty of that as the Patriots get set for their preseason opener Thursday night against the New Orleans Saints.

According to NFL Media’s Mike Garafolo, it looks like Bill Belichick will sit veteran quarterback Tom Brady for their first exhibition game of the year, giving more reps to Garoppolo as he continues preparing to start the first four games of 2016.

Whether or not Brady gets any preseason snaps remains to be seen, but this plan isn’t that much different from past years where Brady saw limited action in the preseason.  Brady’s sat out an exhibition opener as recently as 2014, which came in a 23-6 road loss to Washington where then-back-up Ryan Mallett got the starting nod in that game before Garoppolo eventually unseated him and Mallett was traded to the Texans.

Garoppolo has been getting a lot of work so far during camp and he’s certainly had his ups and downs.  He started off strong in camp and has had some struggles in recent practices.  However, he still feels like things are moving along.

Now he’ll  take the field Thursday night as he begins taking actual game snaps with the first-team offense.  There’s certainly a little more of a sense of urgency, especially given that it’s another chance to start polishing his craft before they start playing meaningful games.

While the final score won’t count, how Garoppolo plays certainly will and he’s looking forward to the opportunity, even if it is just a preseason contest.

“It’s always different on game day,” Garoppolo told the media Wednesday.  “It’s a different feel and everything. You get those butterflies in your stomach and all that. It’s awesome.”

“Football is back now. It’s been back for 10 or 11 days but it’s been practice so now we get to go out there and play tomorrow night.