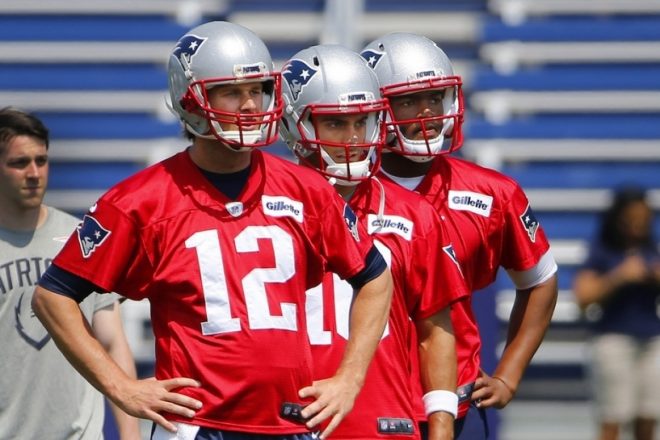 A Stellar Day for the Tight Ends Despite the Sloppy Weather

If it Ain’t Raining, It Ain’t Training…an old military axiom, and quite true today. The weather was vastly different on Sunday morning as the Patriots practiced thru a steady rain before being doused with an absolute downpour just prior to practice ending.

There were some sloppy snaps today, no doubt due to the weather and the fact that some of the centers today are new at the position. But this morning’s sessions belonged to the tight ends.

Tight Ends Dominate: Rob Gronkowski had himself a day today. The big man was obviously feeling good today and he was nearly unstoppable especially in the red zone. He and Martellus Bennett put on a clinic on dominating in the red zone today. 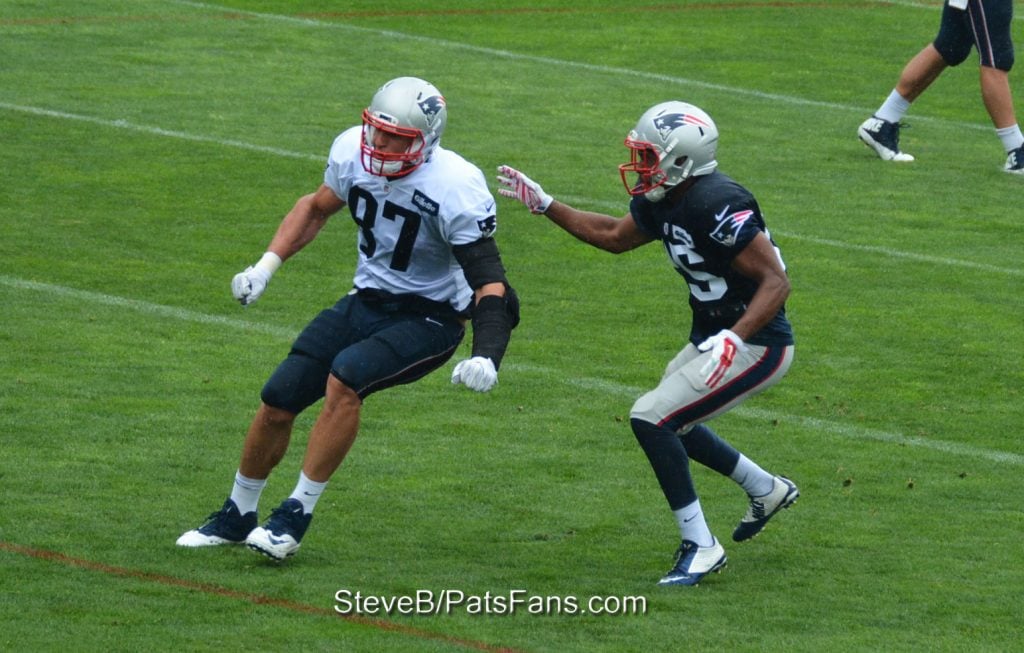 Gronkowski a couple of times put inside moves on Jordan Richards today. Once he strutted to the end zone like one of the Coldstream Guards for Her Majesty. Later he did it again, during 11-on-11s and after catching a fade in the corner of the end zone over Jamie Collins, he flipped the ball into the air. Bennett not to be outdone, scored on a similar play and the two were chest-bumping like it was going to be a familiar sight.  So far, the two tight end offense has been as good as advertised.

The only downer was a throw from Garoppolo to Bennett that bounced off the big man’s hands and right into those of Devin McCourty for an interception. That one was on Bennett and he knew it. He was visibly frustrated by that miscue.

Not Practicing: Danny Amendola and Julian Edelman are still out. Alan Branch is still on NFI but was on the field as well. Dion Lewis, Tre’ Jackson and Nate Ebner (Olympic Games) continue to be absent. They were joined today by Bryan Stork and Jonathan Cooper who left the field injured yesterday. Keshawn Martin was the latest no-show to practice. WR Chris Hogan injured a shoulder during a blocking drill and was held out the rest of practice although he did stay on the field.

Offense Shines in the Rain: Today was more about the offense than their counterparts on Sunday. Malcolm Mitchell looked good and runs smooth precise routes. DeAndre Carter had a pretty impressive day as well. He beat CreVon LeBlanc on a deep post making a really nice catch over his shoulder. The ball was perfectly placed by rookie QB Jacoby Brissett. 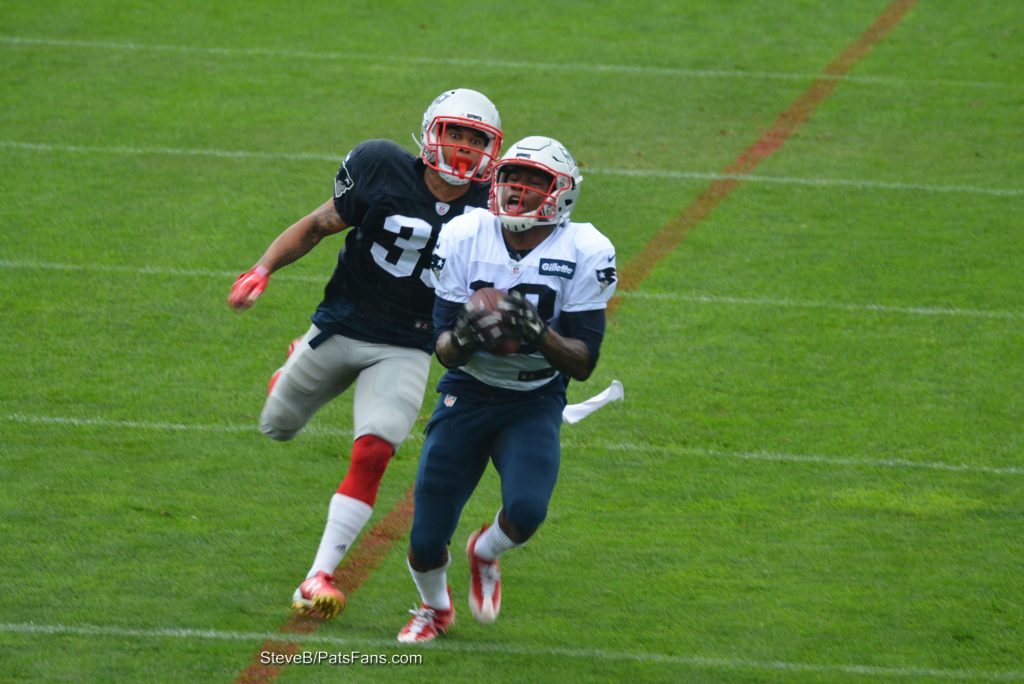 Play of the Day: Aaron Dobson continues his strong summer. I know many fans discount whatever he does with the “he does that every summer” refrain, but he’s been one of the best WRs on the field. He and Jimmy G. connected on a deep ball over Logan Ryan that erupted the crowd. It was a really nice pitch and catch and more importantly, he caught it cleanly. 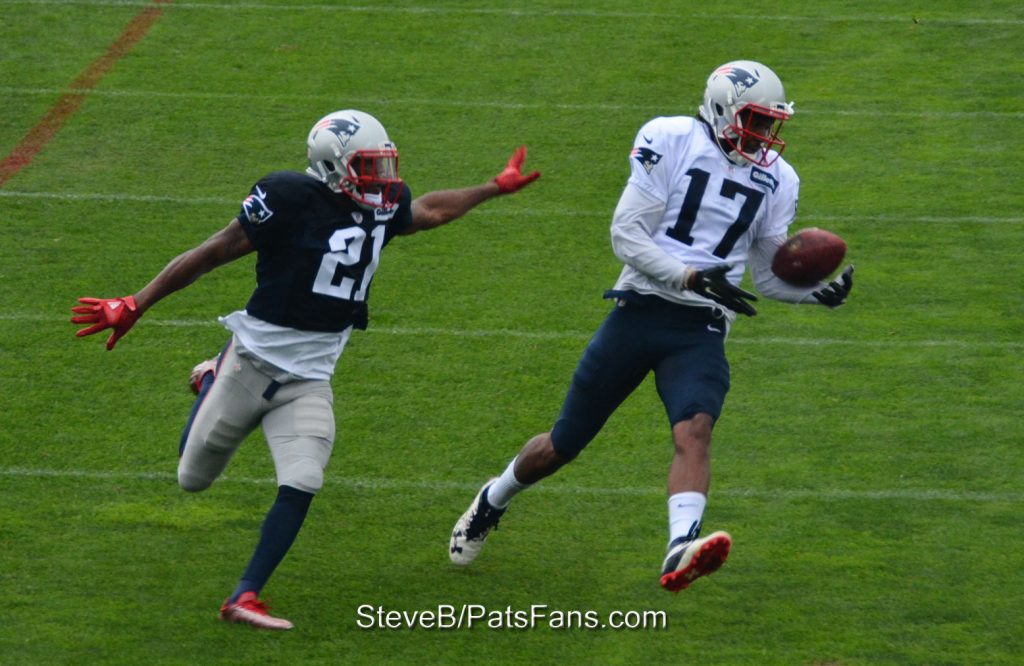 During a blocking drill, Dobson showed some physicality, delivering a blow that jarred Jonathan Jones, knocking the rookie’s helmet off in the process. Maybe the light has finally come on for the fourth year wide receiver.

The coaches continue to work with Kyler Kerbyson at center. He and Garoppolo had a muffed snap and ran a lap. Later Brissett and David Andrews did the “jog of shame”. Kerbyson was flanked by Shaq Mason and Chris Barker during 11-on-11s. Joe Thuney and Ted Karras impressed again in the running drills.

Garoppolo had another pick but again the ball was right in Chris Harper’s hands during the 11-on-11s team drill. Harper’s miscue ended up in Brock Vereen’s hands for the interception. Vereen also had a nice breakup of a pass in the end zone against Gronkowski.

Cyrus Jones seems to be in-line to be the top returner for punt returns. He definitely has that elusiveness and the ability to turn on the jets with the ball in his hands. Harper and V’Angelo Bentley also got in some quality return work.