A pretty quiet morning on this Monday, but here’s a quick rundown of this morning’s top stories.

Answer on Brady Finally Coming? – One of the biggest questions heading into training camp is obviously going to be Tom Brady’s status to begin the 2016 season, and we’re heading into the final stretch where we’ll hopefully get that answer.

Brady’s legal team filed their appeal request back on May 23rd, which was nearly five weeks ago.  At the time most legal analysts felt that an answer would take somewhere around 5-6 weeks, which is the time frame that we’re coming up on heading into these next two weeks as we sit about a month away from the beginning of training camp.

After two of three judges ruled against Brady during the quarterback’s last court decision, he added legal attorney Ted Olson, who did a good job of changing the focus of the case away from Brady vs Roger Goodell to a union battling an employer with unfair arbitration practices.  That move seemingly changed the face of the entire court battle and considering how infrequently en banc hearings grant a rehearing, it no longer seems as big of a long-shot as it once did when they first filed the request.

Brady’s camp received support from some significant organizations, including the AFL-CIO, which is one of the largest labor organizations in the country.  One of the biggest concerns that seems to be out there is the fact that this legal debacle now may have a significant impact on other union and employer situations given how Goodell handled Brady’s appeal hearing, which is a precedent they’re trying to avoid.  The tone of the AFL-CIO’s brief was pretty strong, pointing out that, “A review of the substance of the Commissioner’s decision makes it clear that, in hearing the appeal, the Commissioner was acting in the role of an employer seeking to justify his own initial disciplinary decision rather than as a neutral arbitrator.”

It was a significant ally that jumped into the ring and hopefully one that will persuade the judges to re-hear the case.  If that happens, Brady will likely play in all 16 games in 2016.  If not, Jimmy Garoppolo will likely be the one under center to start the season.

One key sign will be whether or not the Second Court requests a response from the NFL, which could be a good omen.  That and the fact they’ve taken this long and have accepted the multiple briefs that were submitted, including one by independent scientists as well as one by the Patriots in support of Brady, could be another reason to be encouraged.  Although there have been conflicting opinions on whether or not they’ll feel strongly enough given the more pressing matters going on in the court system to get involved in this one.

Either way it seems an answer is coming.  After everything that’s happened to this point, hopefully Brady will get another shot in court and Goodell will have to endure seeing him active in every game yet again this season. 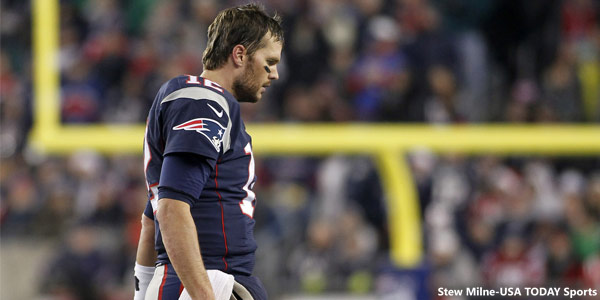 Brady is likely hoping he’s get one more shot in court against the NFL.

Lombardi Decision Not an Amicable One – We heard about the recent decision by the Patriots to part ways with Michael Lombardi, who rejoined Belichick after he left Cleveland’s front office to work with his old friend again here in New England.

Lombardi handled a variety of tasks after he came back, from scouting players, to whatever additional tasks needed from him and he was often seen around the team for most of his tenure.  Reports had claimed that the decision for Lombardi to move on and pursue opportunities in the media was a mutual one, but according to one report, that may not have been the case.

Ben Volin of the Boston Globe reported in his Sunday Notes column that “the decision to split wasn’t so mutual”, with the team opting to not to renew Lombardi’s contract.  Volin also reported that Lombardi had an ally in Belichick, although “it is believed” that the head coach may have been the only one in Lombardi’s corner.

For now Lombardi is out and all indications seem to point to a return to the media being in his future, including with Bill Simmons’ new venture with HBO.

RB Davis a Possibility? – Volin also suggested that the Patriots may want to consider making a move to see if the Kansas City Chiefs might be open to consummating a trade at a position that’s still of need for New England.

With Jamaal Charles, Spencer Ware and Charcandrick West on the roster heading into training camp, Volin believes that Knile Davis should be a player the Patriots may want to target to potentially replace LeGarrette Blount at the running back spot.

He’s a player who has been the subject of trade rumors for most of the spring, and with both West and Ware recently receiving extensions, it’s clear that the Chiefs value those two over Davis and that his time in Kansas City may be running out.

The interesting thing about Davis is that he actually played a key part in New England’s postseason win over Kansas City, as his third quarter turnover that the Patriots turned into a touchdown to go up 21-6 took away any momentum the Chiefs had as they fell to the Patriots 27-20 at Gillette Stadium.

New England tends to shy away from players who turn the ball over in key situations, so it’s hard to say if Davis would even be on their radar.  The Patriots are famous for trying to bring guys in hoping that a change of scenery will bring out the best given player, and he doesn’t view the turnover as harshly as his critics.

“It was probably my best game for a while,” Davis told ESPN a few weeks ago, talking about the game against New England. “I was effective on kickoff returns, caught all my [passes], ran good routes, averaged five [yards] per pop.

Davis said that he believes he’s got the ability, he just needs a chance.

For now all signs seem to point to Davis probably playing elsewhere in 2016, but whether or not it ends up being in New England remains to be seen.

SOCIAL POST OF THE DAY:
Logan Ryan Raising Money For a Good Cause: