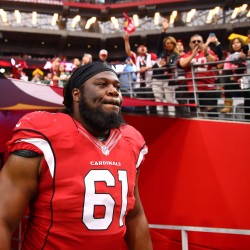 Cooper Admits Broken Leg Was a Setback – After being taken No. 7 overall in 2013, the expectations were obviously big for former Arizona Cardinals offensive lineman, Jonathan Cooper.

Heading into the draft that year, Cooper was touted as one of the “elite prospects”, with NFL.com’s Bucky Brooks referring to Cooper as one of the players who “should earn Pro Bowl recognition early in their careers and rank among the top five players at their respective positions within two or three years.”

One NFL GM even told NFL.com’s Adam Schein when it came to Cooper, “We are talking about a rare, rare athlete.”

The sky was the limit for Cooper, with the former standout from North Carolina seemingly set to take his talents to the next level for a team that was coming off of losing 11 of their final 12 games the season before, giving them the 7th overall selection in the draft.

The Cardinals viewed him as a sure thing.  General Manager Steve Keim said after they selected him, “When you have conviction a player is a Pro Bowl-caliber player, the choice is easy.”

He had some rookie jitters in the Cardinals’ first preseason game against Green bay that year, blaming it on not focusing on technique in a performance he said was “very rookie of me, just kind wild and flailing instead of being sound and just (having) a smooth transition through everything.”

Cooper played much better the next week in the team’s win over Dallas, although they had some issues down in the red zone in that game.  But the next week out in San Diego Cooper went down with a broken leg, having to be carted off the field and just like that, his rookie season was over.  Whatever progress he had been making came to an abrupt halt, leaving him forced to have to spend his first pro season and offseason recovering and rehabbing from his injury.

Most people forget about the amount of work and rehabilitation a player has to go through to work his way back, and there are obviously some mental hurdles that go along with it. Following his recovery he was never the player he was coming out of college, which derailed his progress and saw him slowly fall out of favor in Arizona.

Fast forward to where we are now, and Cooper has a new start in New England.  However, Cooper said in an interview with Sirius XM NFL Radio that the injury hampered his development as a player, which may explain why he didn’t play up to his expectations.

“Things since I broke my leg haven’t quite been where I wanted them to be,” said Cooper via Mike Reiss of ESPN during his interview.

He played in just 10 games with 2 starts for the Cardinals in 2014 and then played in 14 last season, starting the first nine games.  But from there a knee injury kept him out for two games, and he played just nine offensive snaps when he came back against the Rams on December 6th, 2014, and then he didn’t play on the offensive line at all the week after, playing just 5 special teams snaps.

Clearly he wasn’t himself after seeing him fall so hard.  But on Tuesday the veteran offensive lineman pulled back the curtain a bit and admitted that it’s been a tough road.

“You get a whole different mindset when you’re out there working hard, you’re healthy and you’re playing the best ball you can — the only hard mental parts are the playbook and knowing the game. When it goes beyond the field, and when it comes to that mental stuff, that’s when it gets more difficult,” Cooper said.

Sometimes a change of scenery is just what a player needs, and having been included in the Chandler Jones trade Cooper is in a great position here in New England, where a fresh start and playing for one of the best coaches in the game should help, as well as being able to work with one of the best in the game with offensive line coach Dante Scarnecchia, who will hopefully help him get him back on track.

He looked good in what he showed during OTAs, which is definitely a positive sign.  The offensive line was an area of concern by the end of last season and Cooper, if he can finally get to the level everyone thought he might reach, hopefully will give the Patriots the player the Cardinals were hoping they’d get three years ago. 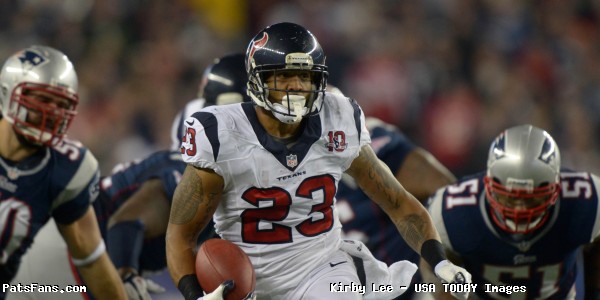 Arian Foster Rumors Continue – There has been plenty of discussion this offseason about the concern at running back for the Patriots, and there continues to be a name that comes up as a potential candidate.

MassLive.com’s Kevin Duffy highlights a report by ESPN’s Jeremy Fowler, who reported that former Texans running back Arian Foster should be healthy enough for training camp, with the only question now being which team will give him a shot.

Dion Lewis, who suffered an ACL injury that cut his season short in 2015 looked good in what little we saw of him during OTAs, while LeGarrette Blount is coming back from a hip injury.  From there the situation is a little murky, with Donald Brown, Tyler Gaffney, D.J. Foster and James White among the others battling for a role.

Foster was spotted in Boston at a Red Sox game during the offseason, leading to speculation that there might have been some mutual interest.  Media reports downplayed his presence, but the fact he’s still available along with the connection Belichick has with Texans’ head coach Bill O’Brien for insight on the injury, will nevertheless keep the whispers going.

Foster in Boston?  On paper it makes sense.  But for now, we’ll have to wait and see if there ends up being any truth to all the speculation.

Brown Focused on Getting Better – One player who is prepared to make a run is Brown, who had a solid spring with the extra snaps and, according to the Providence Journal’s Mark Daniels, led all running backs with 19 receptions during minicamp.

The 29-year old former standout from the University of Connecticut has an opportunity to earn a role if he can build on the work he put in over the last few weeks, and after being used both carrying the ball and in the passing game, he doesn’t care what he needs to do, he just plans on being ready.

“I’m just focused on whatever my opportunity is,” Brown told Daniels. “Whether it’s going out catching the ball out of the back field, lining up as a wide receiver, third-and-1, just be ready for any opportunity that comes my way so just be prepared for any situation really.”

“I don’t want to be one dimensional. I want to help the team in any way I can and that’s be ready for any and every opportunity.”

He’s got the right attitude, and it should set up a fun battle in what’s definitely going to be a competitive camp at several positions this preseason.

Wilfork Ready to Get Naked – Now there’s a scintillating headline, but according to the Texans’ PR department, Wilfork will be among athletes who will bare it all in the upcoming edition of ESPN: The Magazine’s “Body Issue”.

The veteran defensive lineman admitted that he might not have the body of a guy like Rob Gronkowski, but he’s happy with how he looks.

“I know I don’t have the six-packs and the eight-packs and all that … but I’m perfectly fine with what I am,” Wilfork said via the team’s PR channel on Twitter.  “If people can look at me, look at a guy that’s 325-plus doing an issue like this, I’m pretty sure they might have a little confidence after seeing that it’s OK to be who you are.”

He’s got nothing to worry about, as there’s likely little doubt Mrs Wilfork thinks he looks just fine.

SOCIAL POST OF THE DAY:
Brady can’t turn his back for a second: