We made it through another week.  here’s the final rundown of the week with this morning’s news and notes.

McCourty acknowledges secondary advantage – Heading into the start of 2015, there was an incredible amount of doubt in the secondary after the Patriots had lost Darrelle Revis to free agency.

Super Bowl hero Malcolm Butler had made one of the most important plays in team history, but aside from the belief that his play wasn’t a fluke, there wasn’t yet enough tangible evidence to prove that he was worthy enough of being considered among the NFL’s top defensive backs.

Fast-forward one year later and although there’s no championship to show for his efforts, Butler spent last season improving his craft and helping to instill confidence in his teammates that they should feel pretty good about their chances with this group with the way he played in his first full year as a starter heading into 2016.

Factor in the growth that was seen with Logan Ryan last year along with Duron Harmon, and suddenly there’s a pretty good nucleus coming back this season. As a result, veteran safety Devin McCourty is feeling pretty confident as the team convened for voluntary workouts this week.

“Coming in last year, losing guys and not knowing where guys are going to be. I think now we know,” McCourty said via ESPN. “That experience, and coming back with knowledge of being out there in big games and seeing things, I think it enables you to start a little further ahead and rely on guys that have been out there to help other guys out. Whenever you have guys out there that have played, it helps your football team.”

“Guys like Logan and Malcolm, who have been out there on an every-down basis, those guys come back with the world of confidence knowing that they just have to keep getting better and better. They know they can do the job. I’m excited for us as a secondary, as a unit, going through last year and a phase at this point in time where it was a big unknown. And now having a core group of guys that can help bring other guys along the way … it’s encouraging. Your unit just keeps getting stronger and stronger.”

Butler quickly became the team’s best cornerback, and had his moments going against some of the league’s elite receivers in 2015.

In last year’s match-up against the Giants, Butler took on Odell Beckham Jr. and while Beckham got him on the second snap of the game for an 87-yard touchdown, following the play quarterback Eli Manning targeted him 11 times but Beckham caught just three for 17 yards.

The result?  Butler’s performance ended up being a big key as the Patriots overcame a 17-10 deficit at the half to come back and win 27-26.

“I did OK, I did a pretty good job, but I’m always looking forward to doing better,” Butler told the Boston Globe after the win. “I can tell my game is improving every week, but I never settle for everything. I have to keep grinding and be the best I can.”

And it’s that type of attitude that has already helped him grow into a pretty good player.  Hopefully 2016 will be even better.

New Guys Find Out Quick Things Are Different Here – Devin McCourty has been around for quite a while now and he’s obviously no stranger to how things are done in New England, and he’s seen first-hand how quickly new guys coming in find out about how different the expectations are here.

Playing for the Patriots means that contending for a championship is expected, and how the players carry themselves generally sets the tone in reminding everyone – including the new guys – the level they need to be at and how different it is from where they might have played before.

“I think guys know from the first day — I think it’s known through the NFL that this place is a little different,” McCourty told NESN. “Obviously, guys come in, you don’t know how different. You come in, you might say, ‘This is really different.’ Or for some guys, ‘This is kind of what I expected.’

“I think the good part is when guys come in, they say it’s different, but they understand it’s different for a reason — higher expectations. The guys that we’ve had for a while, they expect to be playing at a certain level. You understand we’ve got a guy in charge that knows what it takes. We just follow that lead, we’ll be OK no matter how hard it is, how much you don’t want to do it.”

Reiss Points Out Parallel with McClellin – Depending on how long you’ve been following this team, you may remember 2003 seventh-round draft pick Tully Banta-Cain, who played pretty well during his time in New England before departing to the 49ers in free agency.

Looking back, it was a pretty good example of how head coach Bill Belichick learns the strength of a player and then utilizes what they’re good at to make them as successful as possible. He brought out the best in Banta-Cain, who became a pretty good player in New England’s defense in the role Belichick carved out for him.

Mike Reiss of ESPN Boston noticed a similar parallel in newly acquired Shea McClellin, who is a former 2012 first-round pick.  Obviously Belichick sees potential in McClellin and believes he can be effective in their defense and now he’s likely hoping that the same success he brought out of Banta-Cain can be had with McClellin.

Need a good example of how this could be the case?  Reiss points out that after leaving to the 49ers, Banta-Cain never experienced the type of production he did as a Patriot.  Yet after returning in 2010, he racked up 10 sacks.

Reiss points out the same held true with former Texans defensive lineman Mark Anderson, who came into New England as an under-the-radar type of acquisition before finishing with 10 sacks, only to leave after the season and flounder in Buffalo.

Will that be the case with McClellin?  Time will tell, but the odds are pretty good that if anyone can get McClellin to reach his potential, Belichick should be the guy to do it. 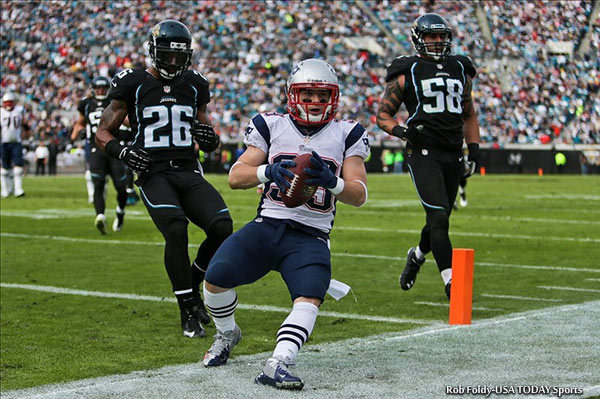 Former Patriot Helped Sell Brown on New England – Donald Brown spent a couple of seasons in San Diego with the Chargers with former Patriot Danny Woodhead, but he probably never had any idea that he’d eventually be heading to the opposite coast to play for Woodhead’s former team.

Brown said on Thursday that the two became good friends while playing together for the Chargers, and when the opportunity arose for Brown to play for the Patriots, the running back admitted he picked Woodhead’s brain a bit before making his decision.

Brown has an opportunity to crack the line-up, with both Dion Lewis and LeGarrette Blount each coming back from season-ending injuries.  From there it’s James White and Brandon Bolden as the next backs down the depth chart, with Tyler Gaffney and Joey Iosefa among the current group the Patriots will take into training camp.

The only problem is, the Patriots likely aren’t done in adding more players when they make their selections in the draft next week, which will mean Brown will have his work cut out for him in what should be a pretty competitive camp.

But he knows how tough it will be, and he’s looking forward to it.

“I have high expectations for myself, that doesn’t change no matter where I’m at or no matter what my role is,” Brown told the newspaper. “I’m my biggest critic, so I set the bar high for myself.”

Some funny moments with Gronk and Sherman – Rob Gronkowski and Richard Sherman are busy starring together in a digital series and ESPN got them to submit to a test comparing each other on different topics and their answers were pretty funny.

For example, when each was asked who was the better Dancer, Gronkowski claimed that honor and Sherman didn’t argue.

“Me. I’m all about dancing,” said Gronkowski. “I’ve never really seen Sherm pull off his moves.”

Sherman agreed, saying,”Gronk has the moves, no doubt. There are a few clips out there of me getting after it, but Gronk literally has a party bus where all he does is invite people on to watch him dance. I’ve got to give him that.”

Sherman also agreed that Brady is the best quarterback of all time.

“Tom Brady. He just is,” said Gronk when asked who was better between Russell Wilson and Tom Brady.   But Russell [Wilson’s] a great quarterback, a franchise QB. Gotta give him credit.”

“Touchdown Tom,” said Sherman, who obviously agreed.  “Wasn’t Kobe [Bryant] the best player in the NBA with his five rings? Tom’s got four rings. He gets the nod because of that.”

You can read the entire segment via this link.

READ NEXT:
Time for the NFL Draft To be Held in Boston
Posted Under: Daily Patriots Rundown