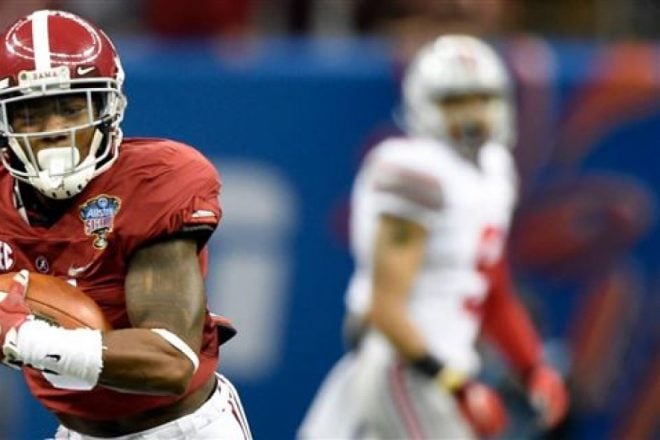 With free agency slowing down somewhat, the Patriots continue to be active and with the draft less than 3 weeks away, it is time for our Mock Draft 3.0

All of the big boards differ quite a bit and the site has a random selection process that picks for the other 31 teams based on the best player available and team needs that are constantly updated. For this third mock draft (4-9), I used the big board of Drafttek.

With the continued moves the Patriots are conducting in free agency, they still have needs at OT, RB, CB with depth needed at WR and LB. This mock draft found so good quality playmakers available that not only filled their needs but were the best players available when it was time to pick… Read on.

Here is our Patriots Mock Draft 3.0 – Drafttek Big Board Edition:

Round 2, Pick #1 WR Tyler Boyd, Pittsburgh: A surprise here, Boyd wasn’t on the board in the earlier mock drafts we conducted. Boyd has good size at 6’1, 200-pounds, and can change direction at top speed.

Boyd is very competitive and wins most 50/50 situations. He runs very crisp routes and has elite ball skills, timing his jumps perfectly. Very physical and tough after the catch. He also has outstanding hands and although isn’t a burner, has had success at returning both kicks and punts. Would be a great fit in the Patriots offense.

Round 2, Pick #2 RB Devontae Booker, Utah: Another surprise, Booker was long gone in our earlier mocks. Booker has good size at 5’11, 219-pounds for the position and would be an outstanding addition to the Patriots offense as he excels between the tackles, can handle a full load of carries and is an every-down threat as a receiver out of the backfield as well.

Round 3, Pick #3 OT Joe Haeg, NDSU: Haeg was a 4-year starter at NDSU and is versatile, playing both tackle spots. Athletic at 6’6, 304 pounds, he could use some bulking up at the NFL level as well as building up his core strength.

With the NFL strength and conditioning program and being coached up by Dante Scarnecchia, Haeg could be a nice pickup. Read our scouting profile here: 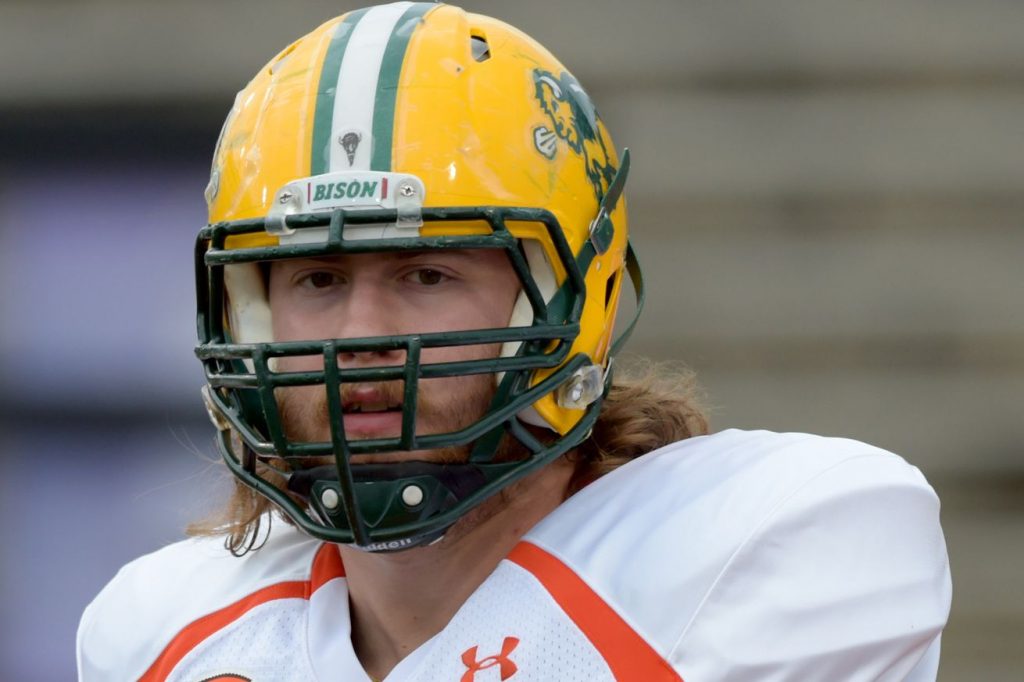 Round 3, Pick #4 CB Cyrus Jones, Alabama: We selected Jones in an earlier mock and wouldn’t hesitate to strike again. Jones is a thick, powerfully built athlete that while he doesn’t have the height preferred (5’10), he makes up for by playing big and with a chip on his shoulder.

A converted wide receiver, Jones can change direction quickly and gets his hands on a lot of passes. He’s a reliable, violent tackler in the open field and has good ability to stick with receivers in man coverage. He’s an outstanding kick returner. 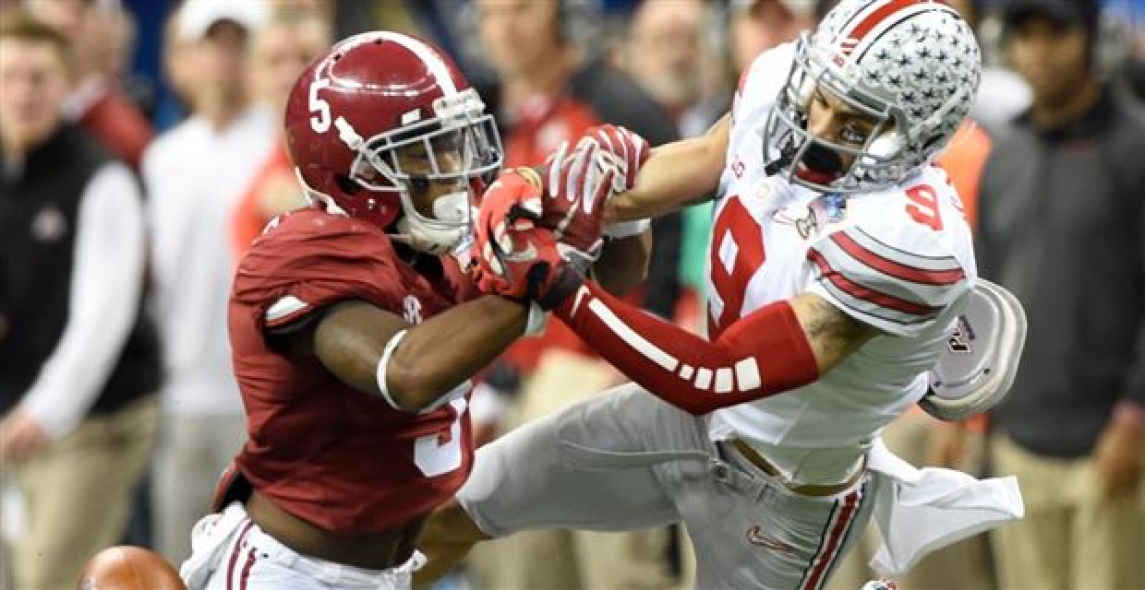 Round 6, Pick #5 DE Aziz Shittu, Stanford: Shittu is a versatile DL that has played a variety of techniques from the “0” to the “5” for the Cardinals. Although undersized for an interior defensive lineman at 6’3, 280-pounds, Shittu plays very fast and is a very good disruptor who can blow plays up in the backfield.

He’s a tough physical player whose best football is in front of him. He can play outside as a defensive end or be an interior sub-package penetrator. He’s shown some ability to stand up to double teams in the running game. His final college game in the Rose Bowl was a tremendous effort, 8 tackles, 3.5 for loss and 1.5 sacks against Iowa.

Round 6, Pick #6 OLB Joe Schobert, Wisconsin: Schobert is a classic high-motor guy that gets overlooked because he’s not the most athletic guy but always seems to make the big play.

He’s versatile and can play at either outside or inside linebacker. He’s quick off the snap, gets off of his blocks, keeps his feet moving and is a relentless sideline to sideline player.

At 6’2, 244-pounds, he’s not the biggest guy out there and has decent coverage skills. He’s also a standout special teams’ player on the coverage teams.

He ran a limited route tree at Tulsa and his route running needs to get crisper but he has all kinds of potential and the Patriots have the offensive personnel now that they can take their time with him to develop him into a big target for the offense. Read our scouting profile here:

Round 6, Pick #8 RB Daniel Lasco, California: Lasco is an undersized (6’0, 205), running back from Cal that plays and runs hard but due to his style of play has had some injury concerns.

Runs inside excellently with a very aggressive, downhill slant, falling forward for the extra yards. He’s a very effective pass blocker and was productive as a junior out of the backfield (33 receptions, 356 yards and 2 TDs).

Round 6, Pick #9 OT Dominic Jackson, Alabama: Jackson was a starter for only 1 year for the Tide after coming over from JUCO. A 6’6, 315-pound mauler in the running game, his pass blocking skills took some time to develop at Alabama but he set to work on it this season and was beaten for only two sacks in 2015.

He was credited by the Alabama coaches with 43 knockdowns in the running game and comes with a bit of versatility as he could play right tackle or kick inside to guard.

Round 7, Pick #10 CB LeShaun Sims, Southern Utah: Sims comes from a small school at Southern Utah but has the measurable (6’0, 203) to play big in the NFL. He has packed on 20 pounds of muscle since coming to the Thunderbirds and ran a 4.41 last spring.

Was an effective press-man corner, albeit against lesser competition but turned some heads at the Shrine Game. He’s an under-the-radar prospect that the Patriots always seem to find every spring.

Round 7, Pick #11 QB Cody Kessler, USC: Kessler was a three-year starter and finished with 88 TDs and only 19 INTs. Despite lacking in size (6’1, 224), and only average arm strength, he has the competitive fire and mental toughness to battle his way thru adversity. Played for five different coaches in college.

Will step up in the pocket and deliver the ball to whomever is open. Was very accurate, never finishing with under a 65 percent completion percentage. Ended his career with a 67.5 completion rate. Gets thru his progressions quickly and will take what the defense is giving. 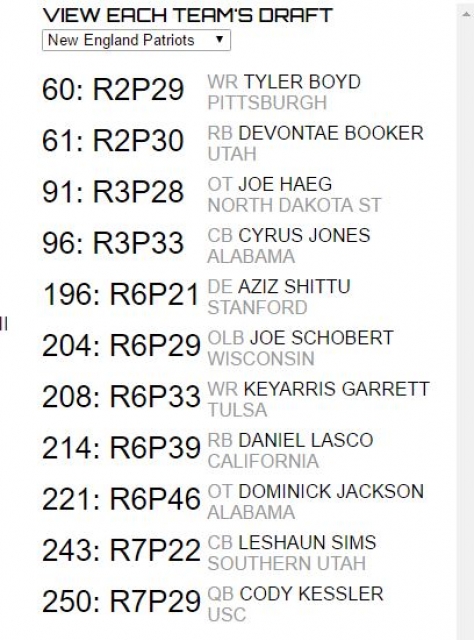 By: Robert Alvarez
Prior to Sunday’s matchup with the Baltimore Ravens, the New England Patriots held a special induction ceremony on Saturday for former nose tackle Vince Wilfork…
3 hours ago

By: Robert Alvarez
A look at defensive lineman Davon Godchaux’s journey to the NFL from Louisiana State University Football to the New England Patriots.
4 hours ago

By: Ian Logue
Considering the reaction coming off the field on Sunday by Mac Jones after Calais Cambpell landed on his left ankle, it sounds like the news…
7 hours ago

By: Ian Logue
Some thoughts following the New England Patriots dropping a frustrating one to the Baltimore Ravens on Sunday.
8 hours ago

By: Mark Morse
Mac Jones's decision-making has been awful. He has regressed badly from last year.  I strictly blame the coaches and the change of offense.  Who does…
10 hours ago