With the Patriots still being active in free agency, it is time to conduct our Patriots Mock Draft 2.0 – Early April Edition. Obviously with the moves their making with available veterans it will affect the way they approach the draft.

All of the big boards differ quite a bit and the site has a random selection process that picks for the other 31 teams based upon the best player available and team needs that are constantly updated. For this second mock draft (4-2), I used the big board of Optimum Scouting.

I say this because the big boards differ a great deal depending upon the board chosen. I did another using a different big board and the results were vastly different. Looking at how the board plays out, I think we can all expect the Patriots to make a move to move into either the 4th or 5th rounds as the talent level begins to drop steeply between the third and sixth rounds.

With the continued moves the Patriots are conducting in free agency, it makes their job a bit easier once the draft rolls around. Without as many holes to fill, they can be flexible and opt for the best player available or move up and down if they so choose. It was a surprise to see both a well-known RB and CB plummet down the draft boards until they were available much later that we thought earlier… Read on.

Round 2, Pick #1 RB Alex Collins, Arkansas: Collins earned second team All-SEC honors behind Heisman winner Derrick Henry in 2015 where he had his third 1000-yard season in a row, rushing for 1577 yards and 20 touchdowns for the Razorbacks.

Collins has good size at 5’10”, 217 pounds and was a TD machine getting 32 scores in three years. Great vision and patience, keeps his shoulders square to the line of scrimmage and stays low with excellent pad level thru the hole.

Displays very good hands out of the backfield and is very consistent at finding daylight and moving the sticks. His major red flag is ball security, with 16 fumbles over the past three seasons.

Round 2, Pick #2 OT Joe Haeg, North Dakota State: Haeg was a 4-year starter at NDSU and is versatile, playing both tackle spots. Athletic at 6’6, 304 pounds, he could use some bulking up at the NFL level as well as building up his core strength.

Selecting him in the 2nd round may be a bit of a reach, but with the NFL strength and conditioning program and being coached up by Dante Scarnecchia, Haeg could be a nice pickup.

Round 3, Pick #3 OLB Leonard Floyd, Georgia: Here was the first of a few surprises in this draft as Floyd fell all the way to Round 3. He’s been widely mocked to go in the 1st in many spots. With a playmaker of his caliber, he was too good to resist.

Floyd is extremely versatile and played ILB, OLB and as a down lineman for the Bulldogs. While his production wasn’t eye-popping, he led the team in sacks for three seasons in a row. He can rush the passer by blitzing off the edge and cover in space. He needs to add some beef before he can set the edge in the running game but would be a great addition in the Pats sub-packages.

He ran a limited route tree at Tulsa and his route running needs to get crisper but he has all kinds of potential and the Patriots have the offensive personnel now that they can take their time with him to develop him into a big target for the offense. 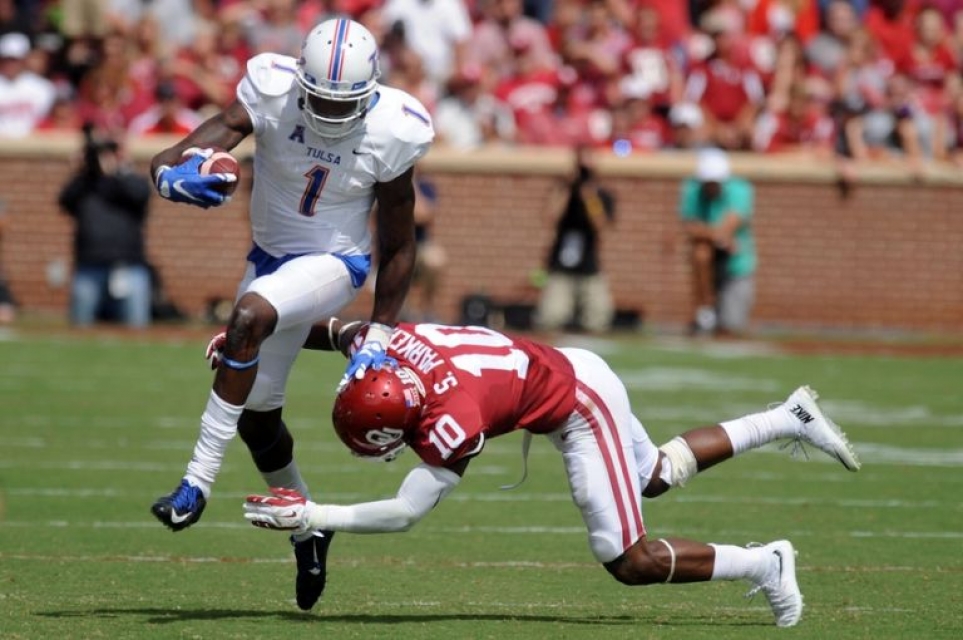 Round 6, Pick #5 RB Kenyan Drake, Alabama: Shocked to see Drake still available on this mock. Drake was the #2 back to Henry in Alabama but the 6’1, 210 pound back has good size and is explosive as both a runner and a pass receiver.

Has quick feet that never stop moving and he’s elusive in the open field and has the ability to make people miss. Extremely versatile, Drake was sometimes split out as a slot receiver where his value as a receiver was showcased.

He can run, catch the ball, has been a kick returner and blocked a punt on special teams. He’s perfect insurance for Dion Lewis, in case he’s not ready to start the season while recovering from his ACL injury.

Round 6, Pick #6 CB Artie Burns, Miami: Another shocker here as I expected to see Burns gone by Round 2 at the latest. Burns has good size at 6’0, 190 pounds with excellent ball skills and the ability to play press man coverage or zone.

Burns shows good awareness and can read the play and react quickly, but he needs to add some weight at the NFL level and improve his tackling. He’s very aggressive which could lead to some penalty flag issues in the NFL

Another versatile guy, he was a kick returner and is a very mature young man, foregoing his senior season to care for his two younger brothers and a son after his mother died in October of a heart attack.

Round 6, Pick #7 OL Willie Beavers, Western Michigan: Beavers was a three-year starter at left tackle at Western Michigan and has very good size at 6’5, 321 pounds. He has good athleticism and agility with quick feet which aids in pass protection. He’s quick off the snap and is able to slide and protect against speed rushers on the edge.

Good run blocker that is able to fire out, and push him man downfield with leverage. Has no major weaknesses, he just needs to fine tune his game, something Coach Scarnecchia will be bound to do.

Round 6, Pick #8 DT Darius Latham, Indiana: Latham was a two-year starter for the Hoosiers playing both the one and three-technique in the hybrid defense, improving every season. He has good size at 6’4, 311 pounds and shows good lateral agility and strength. He can overpower blockers at the point of attack. Plays with a mean streak.

Plays a bit upright and doesn’t have great vision. Latham has some red flags for off-field issues. Was suspended twice for violation of team rules and for an altercation with the student ethics committee.

Round 6, Pick #9 DE Miles Grooms, Hampton: Grooms is a small school stud, playing for Hampton but the 6’3, 251-pound edge player has dominated and is looking to make the big jump to the NFL.

He projects to be a strong side linebacker in the NFL and has the speed and athleticism to be able to cover in space and blitz off the edge. He has excellent initial burst, quick feet, and the flexibility and knee bend to consistently force tackles off balance.

Round 7, Pick #10 OT Tyler Marz, Wisconsin: Marz has good size at 6’6, 316 pounds and played well for the Badgers for the past three seasons. He has decent but not great arm length at 33.5 inches. He’s a good, tough run blocker but at the East-West Shrine game, struggled against good pass rusher in one-on-one drills.

Probably a fit at right tackle or guard is in store for him at the NFL level.

Round 7, Pick #11 QB Brandon Doughty, Western Kentucky: Doughty was a three-year starter at WKU and finished up his FBS career with 111 TD passes (15th all-time), and had the 10th best career completion percentage at 68 percent.

Doughty has decent size at 6’3, 216 and has adequate arm strength but is inconsistent with his deep ball throw. Draft expert Dane Brugler from CBS Sports said that “Doughty was an ideal fit for the up-tempo scheme that relied on a quick release and smart decisions, making most of his reads pre-snap and identifying soft spots in coverage. He has improved functional pocket mobility and carries himself like a coach.” 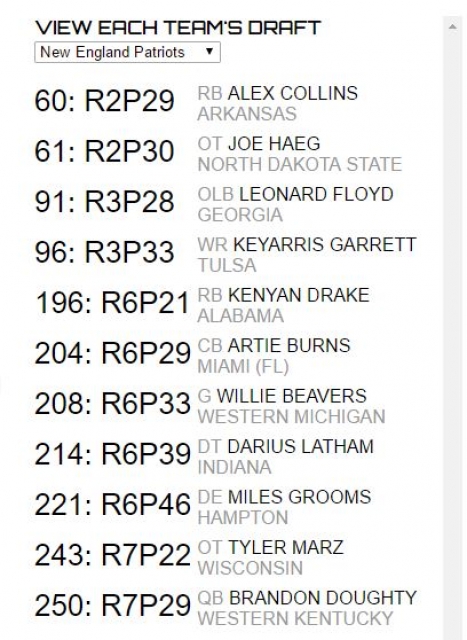