It’s Tuesday, which means that we’re barely into the work week with a long way still to go.  Coffee will make it better, so take a sip and catch up on some news in today’s rundown:

Patriots Try Some Pot Roast on Monday – The Patriots continued exploring some options up front on the defensive side of the football on Monday, moving ahead after losing out on free agent Nick Fairley, who signed with New Orleans.

Ian Rapoport of the NFL Network reported on Monday that the Patriots hosted Washington defensive tackle Terrance Knighton, who could provide them with a solid inside presence as they continue building depth heading into the 2016 season.

Belichick has always had an affinity for big guys who can play well inside and be disruptive, and the thought of a player like Knighton is certainly interesting.  There’s also some uncertainty surrounding Dominique Easley, who was lost for the season in 2015 and there have been conflicting reports about his health heading into 2016.

Although Easley recently appeared like he’s feeling better after releasing this video and it seems like he’s on track to be ready to go for the team’s offseason workouts.

New Patriot Chris Long Really Wanted to Play Here – Guys like quarterback Tom Brady know how special it is to be in New England and he’s been one of the more notable players playing below market value given who he is and his ability.  But it’s allowed this group to build  terrific continuity in the locker room over the years, along with the culture that goes along with it.

That’s one of the things that was apparently attractive to free agent Chris Long, whose father, Raiders Hall of Famer Howie Long, told Mike Reiss recently that he’s excited for the opportunity his son will have with this organization, especially since he took less money to come here.

“I know he could have gotten more money in other places,” said Howie. “He probably would have been slotted right off the bat, but you go there for less money and you go there knowing you have to earn everything you get, and he’s excited about that opportunity with that one goal in mind — having the opportunity to be there at the end and playing relevant games and having a shot at a championship.

“As a former player, those are the games that mean something and for me, being part of a world championship team is special and something you never forget. …He hasn’t played in meaningful games [at the end of the year].”

Hopefully if all goes well, he’ll get that chance now that he’s a Patriot. 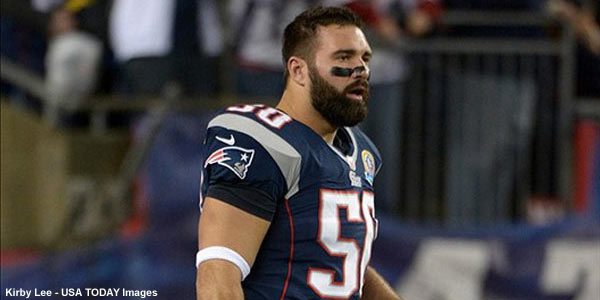 Ninkovich remains as one of the team’s most reliable players.

Ninkovich Still Streaking Along – One of the biggest workhorses in the Patriots defense remains Rob Ninkovich, who quietly continues to fly under the radar, which is what usually happens with guys who are just consistent performers.

He trails just Julius Peppers (Green Bay) and Kendall Langford (Indianapolis), who are both tied for the lead with 128 straight appearances.

Ninkovich recently took part in a ceremony as the Hockomock area YMCA kicked off its annual Reach Out for Youth & Families Campaign back on March 17th, and was a special guest.

The veteran praised the Y, saying he loves taking his daughter there.

“The Y does a terrific job in everything they do. You will find me with my 2-year-old daughter at the Y teaching her how to swim. It’s terrific,” said Ninkovich via Wickedlocal.com.

“I was put here [on this Earth] not just to be a football player, but to affect people’s lives and be a good person,” Ninkovich said to attendees. “I’ve been to the Hockomock Y’s Legends Ball every year, and we donate to the Y. Everyone should donate to the Y because giving back to our community is the right thing to do. We are helping kids grow and learn.”

Edelman Impressed With Kids at Camp – Patriots receiver Julian Edelman hosted a youth football camp Monday at Travis Air Force Base in California, working with kids who enjoyed having the chance to see the Patriots star up close.

Edelman said the military has a lot to teach athletes.

“You can learn so much from how disciplined they are,” he said via the DailyRepublic.com.

The camp was held about 90 minutes away from where he played football in his younger days in San Mateo County.

Some advice he gave the kids, “Stay in the present,” he said. “Work your tail off.”

Edelman of all people is certainly a role model kids can learn from, having been a 7th round pick by the Patriots where he’s become one of the best receivers in the game, as well as having played defense and is also a valuable asset on special teams.  He’s one of the best examples of what happens thanks to a lot of hard work, and it’s given him the opportunity to give back off the field as well.

He reportedly told the parents following the session, “You guys,” he said, “are the real patriots.”

When you go home and find out you still haven't returned a block buster from 2004….. #latefeesfordays #bekindrewind