7 years ago at 10:59 am ET
Follow @SteveB7SFG
Posted Under: Patriots Commentary 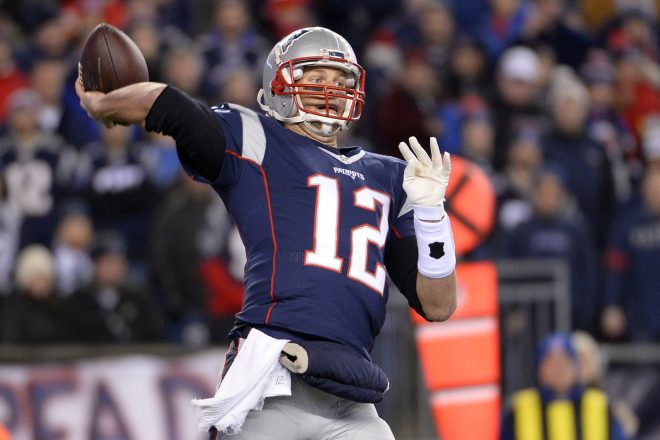 Tom Brady isn’t going anywhere folks and just signed a deal that should ensure that he will indeed retire a Patriot. According to Adam Schefter and Dianna Russini from ESPN, Brady and the Patriots signed a two-year extension that will have him in a Pats uniform thru the 2019 season.

Brady was on the hook for the 2016 and 2017 seasons for $9 and $10 million-dollars respectively. His total cap hit for 2016 was to be a team high $15 million-dollars, a bargain in the NFL considering the dearth of quality QB play. This extension will undoubtedly lower his cap hit significantly this season.

That’s important because according to our own @Patscap (Miguel), the Patriots only have $13.6 million in cap space. Expect this and other moves to start coming quickly. The Boston Herald’s Jeff Howe reported over the weekend that the Patriots had approached Brady about an extension.

Brady who turns 39 in August will now have the chance to play until he’s 42. This will also no doubt help signing some quality depth free agents once the frenzy begins in mid-March. The Patriots will also try to open up some cap space by signing some of their core defensive players to long-term deals lowering their cap hits in 2016. Those include Dont’a Hightower, Jamie Collins and Chandler Jones.

As soon as the news hit, rumors of the Patriots working a deal to trade backup QB Jimmy Garappolo were all over social media. As Ian Logue wrote this morning, with the NFL’s ridiculously playing out this Deflategate nonsense in court this month, it wouldn’t make sense to trade their backup …just in case Brady was still forced to serve a 4-game suspension.

However, there is nothing to state that the team can’t field offers and listen to what other teams are willing to offer. Without a first round pick in this season’s NFL Draft, Garappolo could bring a high second round draft pick and help another team use their own first round pick on another position of need.

One thing is for certain….the off-season is never boring around 1 Patriot Place.