6 years ago at 7:00 am ET
Follow @IanLogue
Posted Under: Uncategorized

It was a rough year for Patriots receiver Julian Edelman.

Coming off of a solid performance in 2014 in which he was a key component during New England’s Super Bowl Championship run, the veteran receiver seemed poised for another big follow up performance.

It started off as just that.  Edelman racked up an astonishing 61 receptions and 692 yards through just 10 games, which had him on pace to catch over 100 passes in an offense that didn’t score fewer than 27 points over that span.  The more impressive stat was New England’s success on third down, which clearly revolved around Edelman’s presence on the field.  Of his 61 receptions, 14 of them came on third down and included 11 first downs and two touchdowns.  They were firing on all cylinders and looked unstoppable.

Then, it all came crashing down.  The veteran suffered a broken bone in his foot in the first quarter against the Giants on a play that seemed pretty harmless, and the news of his injury had everyone in New England letting out a collective groan when it was learned #11 was likely on the sideline until at least the postseason.

When he did return during the Divisional round at home against Kansas City, he was welcomed back with quite the ovation and had a huge game.  He piled up 10 receptions for a 100-yards and jump-started an offense that had been fairly stagnant down the stretch during the regular season after the Patriots had finished 3-4 without him.  But one week later in the AFC Championship game in Denver, he caught seven passes for 53 yards and looked hampered as the game progressed. Unfortunately that, coupled with the Broncos’ ferocious pass rush keying on New England’s snap count, ultimately doomed the Patriots chances at repeating in 2015.

Edelman, like teammate Rob Gronkowski, was one of the more productive players when it came to moving the chains and scoring touchdowns.  Of Edelman’s 61 receptions, 37 of those were first downs.  He actually went through an impressive stretch where for 9 straight receptions he converted first downs and scored two touchdowns, beginning with his 30th reception of the year against the Jaguars, all the way to his 38th reception when the streak came to an end against the Colts (VIEW GRAPHIC).  He also never went longer than 14 straight receptions in-between touchdowns.

“All these guys who went down to Alabama and freaking Ohio State and all these other players, they all rep their school, so I rep mine,” Edelman told KentWired.com during an interview back in October on why he wears his alma mater’s t-shirt each day in Foxboro. “I’m proud to be a Flash, and I wear my Kent State shirt every day to work.”

One of the biggest questions this offseason is going to be Edelman’s rehabilitation and how strong his foot is by the time training camp comes around.  The obvious concern is the fact that what makes him so effective is his speed and quickness, which clearly begins with his feet.  Foot injuries have been problems that have plagued some of the best in the game, with it taking sometimes a year or more to really get back to where they were and that’s provided he doesn’t suffer any setbacks.  Either way, 2015 was a haunting reminder of how much better the Patriots are when he’s out on the field and if he’s able to come back strong next season, there’s no reason not to believe Tom Brady and the offense will pick up where they left off and make another title run in the coming months. 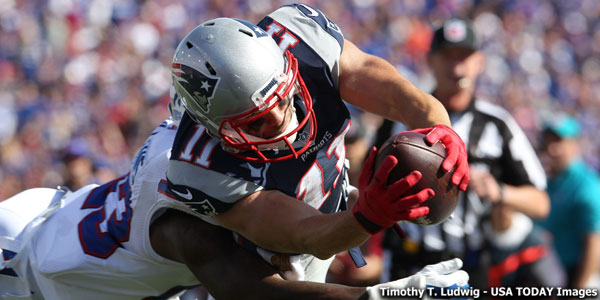 Edelman makes a diving touchdown play in one of his more memorable moments of 2015.
How Was This Article?
Posted Under: Uncategorized