7 years ago at 5:15 am ET
Follow @IanLogue
Posted Under: Patriots Commentary 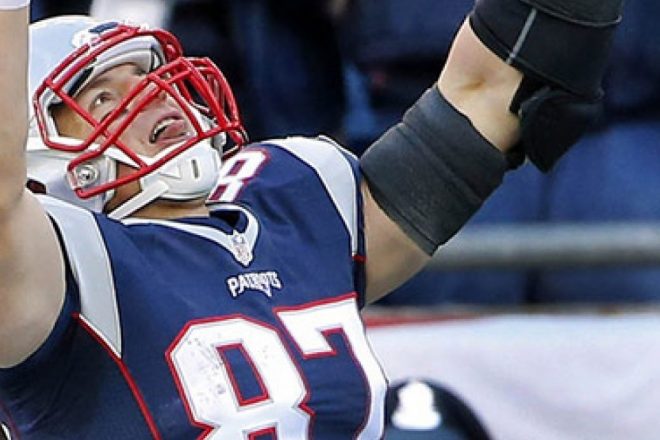 Patriots tight end Rob Gronkowski had an emotional week after losing his good friend and trainer Dana Parenteau, and on Sunday he took his emotions out onto the field and left it all out there.

His first quarter touchdown was big and for those who have gotten used to his big spikes, this one was different after Gronkowski caught the ball and then raised both hands and pointed to the sky before spiking the football. Following the spike, he went over and picked up the football, with his intention reportedly to give the football to Parenteau’s family.

“My good friend [Dana Parenteau] loved the game of football, [he] loved being at all my games, always had my back,” Gronkowski told reporters after the game. “I definitely dedicate that touchdown to him. I pointed up. I know he was up there watching. [I] just definitely made that score for him and I know he was going crazy knowing that it was dedicated to him.”

Tom Brady said after the game that Gronkowski battled hard all day and his touchdown was one of the big keys as the offense tried to get things going early.

“He played tough all day,” said Brady. “It was great to get him in the end zone there early and get ahead. We talked about playing this game from ahead, playing on our terms, and that was a big play. It was single coverage and [he] got good outside leverage. I just tried to put it on him. He’s been through a lot this week. I’m sure he’s happy to get the win like we all are.”

Gronkowski praised the late Parenteau for his support and was reportedly emotional as he talked about him, but he was glad he was able to honor him with a strong performance personally, as well as the fact the Patriots easily took care of Tennessee and improved to 12-2 on the season.

“I know he would want me to go out there and whoop some booty, which we did as a team. He’s pumping me up before the games and loves seeing me go out there and ball. That’s what we did today and I know he’s up there and he’s proud.”