7 years ago at 10:09 am ET
Follow @SteveB7SFG
Posted Under: Patriots Commentary 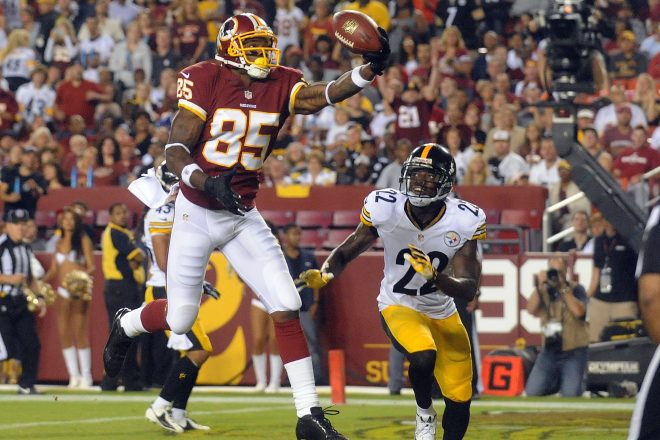 The Patriots added some depth at wide receiver this week by signing WR Leonard Hankerson off of waivers from the Atlanta Falcons.

Hankerson was originally drafted by the Washington Redskins in 2011 draft with the 79th pick in the 3rd round out of the University of Miami. Hankerson played four years with the Skins before signing a deal with the Falcons this spring.

Hankerson has 107 receptions in 39 career games for 1408 yards for a 12.6-yard average and nine touchdowns. In eight games for the Falcons he caught 26 passes for 327 yards and three touchdowns.

He has good size at 6’2, 211 pounds and can box out defenders in the intermediate passing game. He also has 4.43 speed in the 40-yard dash. While not a burner, he can at times go deep and stretch the field vertically. At just age 26, he should be entering his prime but his problem has been one of durability. He’s had just one season (2012), where he played in all 16 games.

He logged two 30-catch seasons for Washington in 2012-13 so he does possess some decent ability. His issue will be how quickly he can assimilate into this offense, how he will fit in and can he stay healthy for the next three to six games.

Not a LaFell replacement: All of social media was abuzz that the Patriots signed Hankerson with the thought of replacing LaFell in the Patriots offense. While the two possess a similar skill set and size, he’s not here to replace LaFell but to augment the other options for Brady and the offense.

Hankerson’s best area to work is in the 5-15-yard range where he can use his size to box out defenders and post up. Unlike LaFell he has a bit better speed where if you choose to stretch the field vertically, he is built better for that.

But Hankerson’s value for the Patriots will be to allow both Julian Edelman and Danny Amendola to heal up if he can work his way into the offense. With Edelman likely out again this week and next, it will be a good time to see what Hankerson can do.

3-Weeks to Showcase Talent: He really has a three-week audition for the Patriots. If he can produce and become a reliable target during the games against the Titans, Dolphins and Jets, then he can work himself into a nice supporting role for the post-season.

He has a lot of work to do and a lot of ground to cover to learn the intricate Patriots offense and route tree for the wide receivers. Remember last spring and summer where LaFell struggled with it mightily until the season started. Hankerson won’t have that kind of time. But in reality you could see his role evolve somewhat if he’s able to stick around and stay healthy.

He will probably be a short-to-intermediate receiver now while Amendola and Edelman are still recovering from injury. But once they’re back in the fold completely, he could see some deeper routes to keep defenses honest and to open up some of the underneath routes.

His development will bear close watching in the next few weeks. But it was a low-risk, high reward signing. Bill Belichick’s old friend Thomas Dimitroff did him and the player a favor by releasing Hankerson off of IR. He could find a nice niche here if things work out.