7 years ago at 1:46 am ET
Follow @IanLogue
Posted Under: Patriots Transcripts 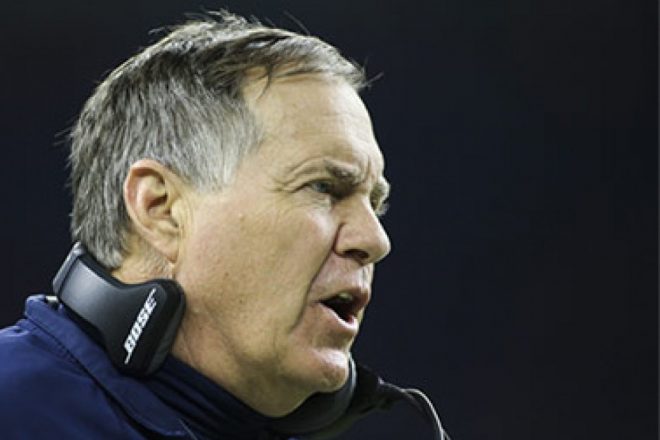 First of all, really proud of our team this week. It was a tough week. I thought they really competed hard all week in terms of their preparation on the practice field. We practiced in pads, we worked on a lot of fundamental things and I thought those guys really had a great attitude about it and we played a solid game here tonight, in all three phases. I thought we got some good plays out of each group and competed for 60 minutes, which is what we need to do. So that was good and look forward to getting back and getting on to Tennessee next week. But good to come down here and come out with a win. It’s a good football team, they’ve got a lot of good players and they play hard, so it’s good to come down here and win. I thought we had a lot of guys step up though and that’s we need for a team. Everybody needs to contribute.

On the job the front seven did tonight:

Yeah, those guys did a good job. They really did. You know, we played a lot of different people as we’ve been doing on the front and our linebackers did a good job, we had good coverage. We gave up there big plays, but on a down-in and down-out basis, I thought we competed well, tackled pretty well and we were able to get off the field on third down, had a couple stops when they did get down there and held them to field goals and then the fourth down stop there in the third quarter. So our red high red area defense, third down defense, those were big keys for us.

On Leonard Johnson performance and the fact he was just signed Wednesday and four days later he’s making plays:

He’s a pretty experienced player in the league. He’s been around a little bit and has played that position. But he worked hard. I mean, he worked really hard this week and so did his teammates, you know, Logan [Ryan], Devin [McCourty], Malcom [Butler], Duron [Harmon]. Pat [Chung], in terms of their communication. I thought the play they made on, it was the fourth down play they made in third quarter, where they had the the stack receivers to our right and ran underneath and you know we made a combination call on that, he did a good job of taking away the inside route there, broke it up. So it was a long week, it was a lot of extra work, a lot of extra meetings, some good competitive time on the practice field and so hopefully that all paid off but you’ve got to give him a lot of credit. He came in and learned and his teammates embraced it and we got some good plays out, both he and Justin Coleman.

On what they were able to do against DeAndre Hopkins:

Well, I mean, he made a great play down the sideline. He’s a good receiver, I mean, it’s tough. We obviously played a lot of double coverage on him. Logan did a good job battling him, we left Malcolm in a lot of single situations and that was competitive but you know, you’ve got to double Hopkins. He’s a big receiver, he’s got strong hands, he’s really kind of always open because of his size, his length and his catching radius, but you know, we got good pass rush and I thought Logan did a good job of battling him, making him work to get open, make the quarterback hold the ball and sometimes we got some pass rush there. He got his hands on a couple balls so, I don’t know, it was a good battle.

On the return of Rob Gronkowski:

Yeah, I mean, he missed one game, so…

Obviously he helped in the red zone:

Yeah, I mean, it’s good to have every player we get back. We want all the players out there.

On how important this win was after dropping two in a row:

Every week’s a big week in the NFL. The fewer games there are, the more important they are. So we had four left, this is one of four, now we’ve got three left. So it will be one of three. Each one gets bigger.

On if he could tell if J.J. Watt was slowed with his injury:

I don’t know, he looked pretty active to me. They moved him around quite a bit, they played him in some off the line positions, they played him some at outside linebacker and moved 59, [Whitney] Mercilus down inside. So they flipped him from side-to-side. He was everywhere, really, they put him in a lot of different spots and some of that probably standing up meant that he didn’t probably have to play blockers so much with his hands. But, you know, he has great quickness and he does a good job of ripping across a guy’s face and then the next time taking a step like he’s going to rip across and is quick enough to come behind. . I thought we had a couple big play runs that really looked like they were going to gain some yards and Watt made one, and [Jadeveon] Clowney made another one just with their quickness coming off the back side. We had them blocked too, it wasn’t like they were free off the back side. They used their quickness to get around the backside and were still long enough and quick enough to make the plays. So he’s tough. He’s tough.

On the way the special teams responded tonight:

Yeah, we played hard. I mean, look, I thought we played hard all the way across the board. L.G. [LeGarrette Blount] had a couple tough runs early in the game, Brandon had a tough run. At the end of the game to get that last first down, we had a lot of them in between. We took good care of the ball offensively, we didn’t turn it over, we didn’t really have any turnover opportunities, that we gave them, we did a good job of securing the ball. so that was good. But I thought we tried to compete against them in the running game, they’re a tough team to run against, Vince [Wilfork] is good, [Jared] Crick and Watt are good, Clowney and Mercilus are good, they’ve got good inside linebackers in [Benardrick] McKinney and Brian Cushing, so there’s not a lot of gimme blocks up there.

On what they did during the second quarter defensively:

Yeah, I thought that was good complimentary football on our part, something that’s really been locking in the last 4 weeks. We made the stop on defense, we got the ball back, then we got the 2-minute warning, got a first down then were able to finish in the end zone with 14, whatever it was, 15 seconds, 20 seconds, whatever it was on the clock, so it was a great great job by our defense of making stop, great job by our special teams of putting us in good field position, great job by the offense of executing the plays and also using the clock up. Then we came back in the second half and, you know, we had the two close plays that were overturned and ended up getting a field goal. So, that was a big ten point swing for us. Again, it’s close to being more had we been able to convert those passes that were overturned. So that drive at the end of the half was big and then the start of 3rd quarter to, you know, take advantage of that opening possession. That was … I thought that 10 points swing was obviously, was a big help for us tonight.