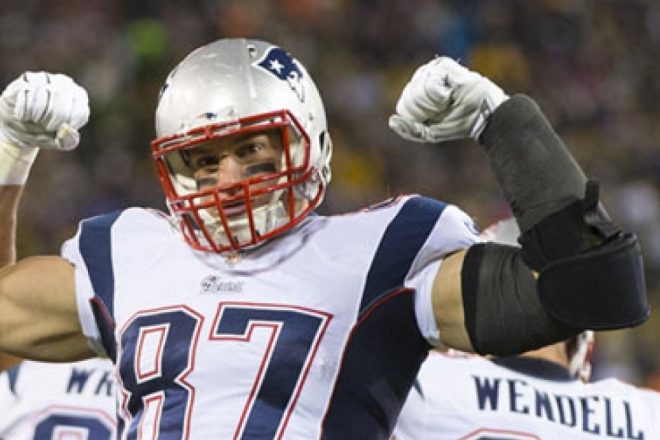 Patriots fans have enjoyed seeing Rob Gronkowski ascend to becoming one of the NFL’s elite at his position, but Sunday night’s scare was a reminder of how fragile the livelihood of players like him really are in this league.

An emotional Tom Brady touched on it during his post game press conference after New England’s disappointing overtime loss to Denver.   Like everyone else, watching Gronkowski take a vicious shot to the same knee that he injured previously, which sidelined him for the remainder of the 2013 season, was tough to take.  Then to see him get carted off the field was even more frustrating because having been through his own injury, Brady likely knows that scenario would have done more than just end the tight end’s season.  Injuries like that are brutal because of the amount of work they require players to put in to try and come back from, and the risk that these players take each week is a big one considering how all of them continue getting bigger, stronger and faster.  Having already seen Gronkowski go through it, you could tell that knowing it might have happened again really hit home with Brady.

“I mean, he’s the best tight end in football,” said Brady.  “So it’s just…you know, it’s so hard to see these guys get hurt like this and I always have a lot of respect for players who play this game because you risk a lot to play and I think a lot of times that gets overlooked.   You sacrifice a lot and I think guys sacrifice their bodies and you know, it’s hard to see your friends get, you know, taken down like that.  It’s part of the sport and we understand that but it’s also… I have a lot of respect for the players who take the field.”

What Brady said was dead on.  After all, following an injury, fans see one side where they look forward to seeing the eventual return by the player, expecting him to return at a level that’s at least close to what they saw before he was wheeled away.  However, that doesn’t happen without a lot of hard work and rehab sessions filled with pain and uncertainty, as well as likely some self-doubt.

In Gronkowski’s case, he’s already been down that road too many times.  One thing that stood out back in training camp was Gronkowski’s comments about how much better he felt coming into this season after not having had to spend his offseason rehabbing an injury, which he had to do for essentially three straight years.  It started with the ankle injury he suffered before his first Super Bowl that required offseason surgery to reportedly repair ligaments he tore after the tackle by Bernard Pollard in the AFC Championship Game, which forced him to work his way back heading into the 2012 season.

Next came his fractured arm, which he broke while blocking on the final extra point of a blowout win over Indianapolis that year and he later re-broke it when he came back for the postseason against Houston.  That entire experience required multiple surgeries and set up a delayed return that prompted conflicting reports surrounding his timetable for the 2013 season, and to this day he wears the brace on it to protect it.

But later in 2013 Gronkowski tore both his MCL and ACL against the Browns, which saw him carted off much like he was Sunday night.  That injury ended his season and required surgery as well as another offseason of rehabilitation before the 2014 campaign.

That’s a lot for any player to have to keep battling back from, and obviously it’s a mental grind.  Credit Gronkowski for all he’s been through and even more for the fact he’s still somehow been able to get back to playing at an elite level.  Those experiences could have done any other player in, but Gronkowski has battled through it and it was great to see all that hard work finally pay off when the Patriots beat Seattle back in February.

Up to this point Gronkowski has been healthy this season and was having a pretty solid year before what happened Sunday night.  Fortunately, this time around, he finally seems to have caught a break after ESPN’s Adam Schefter reported that Monday’s MRI revealed nothing more than a bruised knee.  The initial joy of knowing he’ll potentially be around for the postseason is obviously terrific, but for his own sake, the fact that it’s not another significant setback can’t be emphasized enough.

It’s just great news and well deserved for a player who really needed a little luck to finally go his way.  Now we’ll find out in another month or so if he’ll be able to help his team put together back-to-back championship runs, which would just be icing on the cake for a player who has certainly worked hard for that opportunity after all he’s been through.