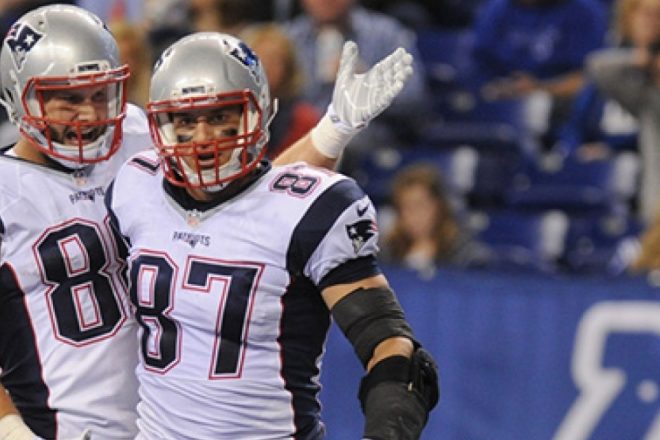 Good morning, here are Sunday’s Patriots news notes and what’s happening around the division. From all of us here at PatsFans.com we hope everyone had a happy and safe Thanksgiving weekend.

Roster Moves Aplenty: This week with the injury bug still proving to be the team’s biggest nemesis thus far this season, the Patriots made a flurry of roster moves.

Both Danny Amendola and Aaron Dobson were hurt in the Bills game, further weakening an already short receiver core short Julian Edelman and Keshawn Martin. Dobson was placed on IR and this marks two lost seasons for him in a row. One has to consider if this is the end of the road for him in New England.

Amendola was diagnosed with a knee sprain and is considered week-to-week. He did practice in a limited role on Friday, but the team took the cautious approach and kept him in NE for treatment while the team traveled for tonight’s game in Denver.

This leaves the Patriots with just two healthy wide receivers (Brandon LaFell and Chris Harper), to face the #1 pass defense in the league with Denver. Martin has been bothered with a hamstring and hasn’t played since Week 6.

The Patriots initially signed S Dewey McDonald but he was released as well as LB Eric Martin. The team then signed TE Asante Cleveland and LB Darius Fleming from the practice squad. Cleveland spent time with the Niners and Fleming played in five games in 2014 mainly on special teams.

Fleming’s ascension most undoubtedly means that Jamie Collins, listed as doubtful will miss his fourth game in a row for what has been characterized as an illness. Obviously it wasn’t a simple case of the flu for the Patriots talented linebacker as this will be a quarter of the season missed for him.

Defense is the Focus This Time: When the schedule was released, everyone (us included) circled this one as a big, big matchup. But with the releases of the Patriots top three cornerbacks, early season prognostications of the Pats defense falling apart and having to win shootouts hasn’t materialized.

With the injuries and deteriorating level of play from Peyton Manning, the Broncos have been winning with their stellar defense. Now Manning is out and possibly never to return with Denver as Brock Osweiler will start his second game in wintry conditions that Manning would have been a definite weak link with.

Who would have thought back in the spring that on the day of this game, we aren’t talking about shootouts and an over/under in the 60’s, but the defenses and how points could very well be in a premium tonight.  Entering the game, the Patriots are #1 and 2 in defensive points allowed. Given that Osweiler is starting just his second game and the state of the Patriots receiving core, the first team to 20 points may very well win tonight.

Raise your hand if you thought that back in the spring….

Offensive Line Carousel Must Slow Down: Entering tonight’s game, the Patriots have, thus far used 25 different offensive line combinations. While some of it has been by design and matchups, the injuries suffered have also played a large part. And for the first time in 2015 cracks have shown up for the offense.

In the second half of the Washington game, the offense was much more conservative than they’ve been all season, taking into consideration the score and the players out of position. Against the Giants, a team that had issues rushing the passer all season, they sacked Brady and harassed more than they’ve done all year. Then on Monday night, the Bills defense harassed Brady all night long and hit him 10 times and pressured him on 50 percent of his dropbacks. That was the highest total since 2008.

Facing a team that leads the NFL in sacks with 34 (although their number has slowed since the DeMarcus Ware injury), the Patriots can ill-afford another performance like that. Denver loves to blitz so expect them to test not only the offensive line but whoever is running the hot routes for Brady, replacing the injured Edelman and Amendola.

Look for the Patriots to find their best starting unit and stick with it tonight with the exception of situations where they bring in extra OL for short-yardage etc.

Brady/Brees Closing in on Marino: Tom Brady and Drew Brees are both closing on another milestone this season. With three more TD passes, Brady will tie Dan Marino with 420 good for third most in NFL history. Right on his heels is Drew Brees who is one behind Brady with 416.

Both are closing in on pretty rarified air with the passing of Marino, who was considered one of the best to ever play the position for the Dolphins. This will bear watching as the two near the milestone in the coming games.

Monday Night Wasn’t a Stellar One For Steratore: In what is becoming a weekly occurrence, the officiating in the Patriots – Bills game on Monday night is exactly what the league doesn’t need on the national stage.

The refereeing crew of Gene Steratore is considered one of the better ones in the NFL; but they didn’t perform like on in Gillette.

In one of the most bizarre plays we’ve seen, early in the third quarter Patriots QB Tom Brady was under pressure in the pocket and rolled out toward the right sideline. Side judge Gary Arthur who had a clear un-obstructed view of Brady who was still two yards from the sideline; got confused from Bill coach Rex Ryan who was yelling in his ear that Brady was out of bounds and inexplicably blew his whistle.

But Brady had flipped the ball over the Bills defenders to Danny Amendola who had nothing but green in front of him. Once the whistle blew everyone, including the Bills defenders stopped. We’ll never know if Amendola would have scored, been immediately tackled or tacked on some yardage after the catch. The inadvertent whistle was a black eye for the officials and for the league, whose head of officiating Dean Blandino admitted, he’d never seen before.

The officials had a prolonged huddle where they ultimately correctly decided to place the ball at the spot of the catch and tack on 15 yards as a penalty to Ryan for obstruction. Fans in Gillette Stadium were incensed. Compounding matters was the drive for the Patriots stalled and Stephen Gostkowski missed a 54-yard field goal, his first miss of the season and New England came away with zero points. Imagine the hue and outcry had the tables been turned and it was the Bills that had a play whistled dead.

Then Steratore’s crew took in an inordinate amount of time to rule on the James White touchdown run where the Bills were clearly off-sides. At the snap one of Buffalo’s linebackers was a full 10-15 yards behind the Patriots line of scrimmage. What in the world would take so long to iron out?

To compound already muddy waters, the final play of the game, a pass from Tyrod Taylor to Sammy Watkins should have stopped the clock with two seconds left as Watkins went down untouched but scooted out of bounds on his behind. The officials ruled he gave himself up and ended the game. And it was another black eye for the league in 2015. The game was dragging on so long it felt like a Red Sox – Yankees game.

Jets Looking to Start Quickly vs Miami:  The Jets are still very much alive for a playoff spot at 5-5 but things have begun to go south for a team that started off so well. They’ve lost four of their last five games and reportedly Jet coach Todd Bowles, always so cool and calm in public, lit into his team after their loss to Houston.

They need to win against Miami (4-6), who still isn’t out of the playoff race yet either at the Meadowlands this Sunday. The Jets will be looking at getting the offense in gear much quicker this week, something that has been hampering them dating back 24 games. The Jets have one opening drive touchdown in that time…the lone one, against Miami this season in London.

One big matchup will be who will cover Jarvis Landry now that Darrelle Revis has been ruled out with a concussion. In Miami’s blowout loss earlier in the year, Landry racked up 268 all-purpose yards. With Revis out, Miami will be looking to capitalize.

Bills Have Big Game vs KC: The Bills are another team that are on the cusp of the playoffs with a 5-5 record and face a very resurgent Chiefs team that was left for dead earlier in 2015 and now could find themselves right back in the hunt.

The Bills were thought to be ready to possibly push New England for the AFC East this season and to be .500 after all the bluster before the season is disappointing. Now they face a team that has beaten them in each of the last two seasons in heartbreaking fashion.

If the Bills lose to the Chiefs they’ll be a game behind in the standings at 5-6 but the Chiefs will hold the all important tie-breaker in head-to-head competition. The Bills defense comes in a bit short-handed as DT Kyle Williams was placed on IR, needing surgery on his left knee and DE Mario Williams will miss this one as well.

But the biggest question is just how healthy is Taylor’s throwing shoulder? The team says he’s fine, but he looked anything but at the end of the Patriots game. He couldn’t put anything on his passes on that final drive. This will bear watching.
Follow me on Twitter @SteveB7SFG or email me at [email protected]

Listen to our Patriots 4th and 2 podcast on blog talk radio as the writers Russ Goldman, Derek Havens and I from PatsFans.com discuss the latest Patriots news Wednesdays at 12 noon

By: Steve Balestrieri
“I think they’re a 12-win team,” Ninkovich said on Greg Hill’s morning show. “Listen, six months ago I thought they were a nine-win team.
8 hours ago