7 years ago at 9:56 pm ET
Follow @IanLogue
Posted Under: Uncategorized 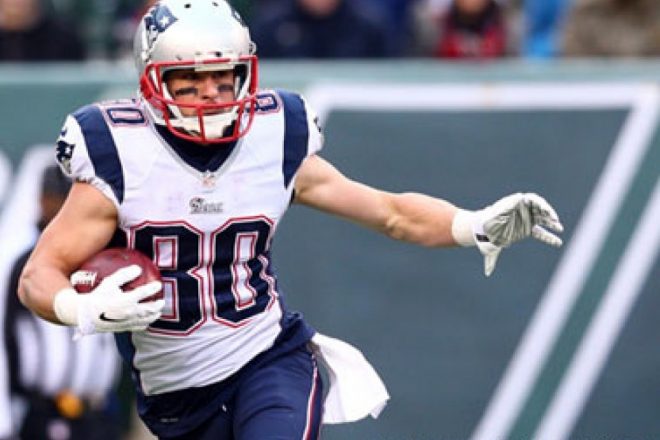 The Patriots are already in tough shape without the services of Dion Lewis and Julian Edelman in their passing game and now it looks like they’ll be without yet another Sunday night out in Denver.

According to WBZ’s Steve Burton, Danny Amendola will miss Sunday night’s battle against the Broncos after Burton reported the receiver won’t be traveling with the team.

Danny Amendola is out against the Broncos. In fact, not even traveling with the team. #WBZ

Amendola’s loss is significant as he became the next player lost shortly after becoming the “next man up” in New England’s offense.  With Edelman out of the line-up, Amendola stepped in and came up big Monday night against the Bills, hauling in nine passes for 117 yards.  But a knee injury late in the game sidelined him and his absence now further debilitates a passing attack that is suddenly without three of the top targets that Tom Brady once had in his offense.

Heading into Sunday night’s match-up Brady will have to rely on receivers Brandon LaFell, Chris Harper and Keshawn Martin, with Matthew Slater now moving up the depth chart if the Patriots need him.  They’ll also have tight ends Rob Gronkowski and Scott Chandler, as well as Asante Cleveland, who the team just promoted from the practice squad on Friday.

That’s not exactly the ideal situation but hopefully it will be enough for the Patriots to win against a team they may see again in a couple of months.