Heading into Sunday’s battle with the Broncos, one thing that the Patriots will certainly need to do better this weekend is get the ball to tight end Rob Gronkowski a little more than they were able to Monday night against the Bills.

Against Buffalo, Gronkowski was targeted seven times with just two receptions, primarily because the Bills did a good job doubling him and were able to get to Tom Brady so quickly that the quarterback didn’t have the time to find the player left open.

Denver defensive coordinator Wade Phillips saw what the Bills did, and his answer when discussing how to handle Gronkowski seemed to indicate he might plan to attack the same way.

“(Buffalo doubled him) some,” Phillips said via the Denver Post on Thursday. “They didn’t all the time. He’s a great player and you have to be aware of him. Anytime they have a — they do the same thing defensively against teams they play. If you try to take away what they do best or take away their best player, that’s what you have to try to do. It means doubling him a lot, certainly, but it also means putting enough pressure on the quarterback where the guy doesn’t have time to throw to the guy even when he gets open sometimes. You can’t double-cover him every play, but there are certain things that we will. You have to.” 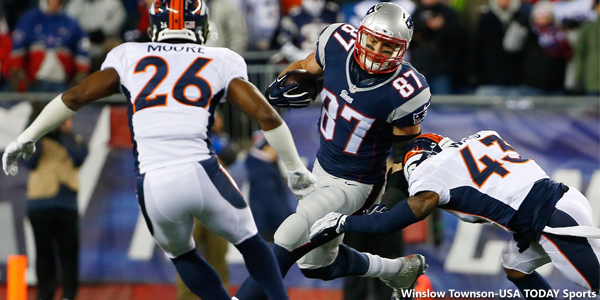 Broncos safety T.J. Ward (43) had a tough time slowing down Gronk in their last meeting.

This time around Edelman won’t be there as he continues recovering from his foot injury and on Thursday the Patriots also placed Aaron Dobson on injured reserve.  Danny Amendola reportedly participated in practice on Thursday but he’s coming off of a knee injury, so how much, if at all, he’ll be able to contribute on Sunday remains to be seen.

That leaves New England having to try and get production from somewhere and they’ll have to hope they’ll be able to get Gronkowski more involved this week against the NFL’s best defense.  Brady said on Wednesday that Denver’s defense attacks quite a bit and he’s going to have his work cut out for him.

“I think when you’re the first-ranked defense in the league obviously you’re doing something right and they can get to the passer,” said Brady. “So those guys are in a good position when the ball is snapped. They are very aggressive. I don’t think there’s anything the offense can really do to dictate what they do defensively. They just call their defense, and then they try to tear your head off.”

Brady noted that the Broncos group of pass-rushers are pretty formidable and considering how much trouble the Bills gave him Monday night, this week should be another big challenge.

For now, out in Denver, they’re feeling pretty confident and they’re certainly aware of how critical it will be to slow Gronkowski down if they hope to hand New England their first loss of the season. According to Broncos safety T.J. Ward, whether it’s double-teaming Gronkowski or whatever approach they decide to go with, he believes they’ll have a better plan to deal with slowing the tight end down this time around.

“I don’t think anything works week to week,” Ward told the Post. “Guys change it up and he adapts to different things that defenses do. We’ll have a plan.”

Hopefully the Patriots will have a better one.