7 years ago at 11:21 am ET
Follow @IanLogue
Posted Under: Patriots Commentary 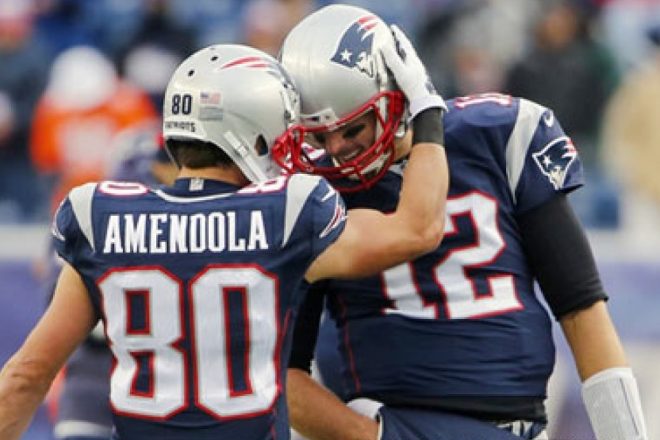 Two seasons ago there were quite a few people who wondered what value Danny Amendola had to this football team after a so-so first season riddled with injuries and unfulfilled expectations.

Last year’s playoffs were a glimpse of how valuable he really is, with the veteran receiver making some big catches down the stretch. He had three touchdowns during the postseason, tied with Rob Gronkowski for most on the team. He’s already had a strong start to 2015, having already hauled in 40 catches for 403 yards and two touchdowns while giving fans glimpses of the player they all likely hoped he’d become.

On Sunday against the Giants, Amendola was huge. He made a critical 4th down catch to keep the chains moving during the Patriots game-winning drive and had five total on five targets in the fourth quarter.

But that type of consistency ended up being the norm on Sunday for Amendola. Brady targeted him 11 times and connected on 10 of them, with the two seemingly being in sync at just the right time. The two have failed to connect on just eight passes all season, and over the last two games it’s been just twice.

Looking at it further, it’s pretty impressive to see how well he and Brady have been able to connect compared to Rob Gronkowski and Julian Edelman.  Brady has a 64% completion percentage when targeting Edelman, and 65% targeting Gronkowski.  With Amendola, it jumps to 83%:

One key factor that likely comes into play with Amendola is the fact those two players tend to draw all the attention, which has likely made things a little easier for him.

Down in the red zone, Brady is perfect targeting Amendola so far this season, connecting on all four attempts which were all first downs, including two touchdowns.

Bill Belichick said on Wednesday that he’s not surprised with what he’s seen from his receiver.

“I mean, Danny is a really consistent guy. I think anybody in the program would speak to that,” said Belichick.  “His work ethic, his toughness, his intelligence – he’s ready to go every day and there are no days off for him. Every play for that matter – he works hard on every play.”

Looking at his overall numbers each week shows just how consistent he’s been all season:

One thing that stands out is the fact Brady’s only ever missed him more than once in just one game this season (Week 5 vs Indianapolis), which shows just how well these two are clicking at this point in the year.

That’s certainly good news and now Amendola will be working hard to try and pick up some of the production lost with Edelman out of the line-up.  As it stands right now, guys like Aaron Dobson, Keshawn Martin, or Chris Harper are all potential candidates to pick up some of the slack, but those are players down the depth chart behind Amendola and the veteran will likely find himself in the limelight over the final month as the Patriots continue trying to win games and lock up the top seed in the postseason.

He’s a guy who hasn’t said much and has kept the right attitude.  He even went so far as to take a pay cut this offseason to allow him to stick around for another year and he seems to finally be comfortable in an offense that has been one of the NFL’s most productive this season.  Edelman’s absence should give Amendola the opportunity to shine, and Josh McDaniels said the trust level that’s developed between he and Brady has certainly gotten better and he expects big things from him.

“Danny’s attitude is tremendous,” said McDaniels this week.  “I think he’s grown more and more comfortable in our system with the things we ask of him. I think his trust level with the quarterback has grown and gone forward every year that he’s been in our offense, and I think that his performance always gives us tremendous confidence to continue to use him more because every time we’ve asked him to come through for us in critical situations, Danny usually does a great job of that for us.”

And the fact he and Brady already are seemingly already on the same page should hopefully make that a little easier.