7 years ago at 6:44 am ET
Follow @SteveB7SFG
Posted Under: Patriots Injuries 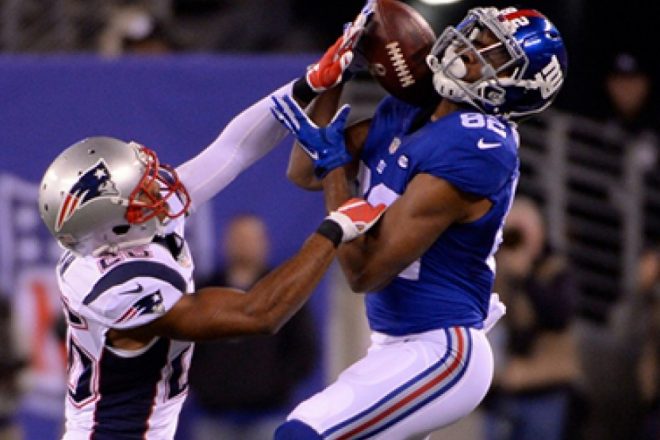 The Patriots beat the Giants in thrilling fashion with a last second 54 yard field goal by Stephen Gostkowski to remain unbeaten at 9-0 on the season. The 27-26 victory turned the table on the Giants who had won the last three meetings against New England with late heroics by Eli Manning. This time it was Tom Brady and Stephen Gostkowski who led the final charge for the Pats.

But the victory was costly, WR Julian Edelman suffered an injured foot and it was being reported on Sunday evening that he broke his foot and will require surgery on Monday. It is expected that he’ll miss the remainder of the regular season and may be available once the playoffs roll around.

The Patriots and Giants games are always compelling contests to watch and this one was no different. It was back and forth all the way with a definite playoff feel to the game. It now joins the previous four matchups as an instant classic. This one was worthy of the prime slot it was given as well as CBS putting their top crew on it.

The Giants were seemingly in control with a 10-point lead in the second half until Danny Amendola ignited the moribund Patriots offense with an 82-yard punt return. It may have gone for a touchdown; however Duron Harmon committed a cardinal sin by tripping up Amendola at the Giants 10-yard line when he was surrounded by blockers. Had the Patriots had to settle for three or even been stopped on the ensuing possession, it could have been disastrous.

Giants Can’t Put it Away: The Giants after the game were lamenting the lost opportunities to seal this game away and there were some flashbacks to similar plays that the Patriots can remember. On the Giants final drive, Odell Beckham Jr. beat Malcolm Butler in the corner of the end zone with what would have been a game-clinching touchdown.

The third down pass was perfectly thrown by Eli Manning but as Beckham was coming down Butler made a great play by knocking the ball out of his hands forcing the Giants to settle for a field goal setting the stage for the Brady drive. It was reminiscent of the drop by Wes Welker in Super Bowl XLVI that could have iced the game.

On the Patriots final drive, Brady’s first pass was underthrown and it seemed Landon Collins had the interception to once again seal it away. But as he went to the ground, the ball bounced away and the Patriots got another chance. Giving Brady a second chance can be dangerous and indeed it was. This play also harks back to Asante Samuels’ dropped pick in Super Bowl XLII.

The Giants clock management on their final drive will and should come under scrutiny. They could have used up much more of the clock, and their inability to do so gave Brady just the amount of time needed.

Gostkowski Cements Legacy: Stephen Gostkowski is the NFL’s highest paid kicker and is by far the most automatic. He hasn’t missed an extra point in nearly ten years and has been perfect in kicks and field goals this season. He also leads the league in kickoffs into the end zone. It is money well spent.

But the one thing missing from his legacy is the one big kick at crunch time ala Adam Vinatieri to give his team a big victory. Well that block can be checked now as his 54-yarder with a second to go eased a lot of bad memories for the Patriots against the Giants. It was fitting that his kick also broke Vinatieri’s record for most career field goals by a Patriots kicker.

It was dramatic, it was clutch and most importantly it was good.

Devin McCourty took a poor angle and actually took Butler out of the play. The result was an 87-yard touchdown, the longest ever given up by a Bill Belichick team and the collective breath was sucked in by New England fans.

But Butler not only recovered but was outstanding the rest of the game. Butler held him to just three more catches for 17 yards after the big touchdown. The two were battling it out play after play, after the game there was a lot of mutual respect being thrown back and forth.

Beckham Jr. was targeted 12 times and had just four catches. It had to be Butler’s best game as a pro and he reacted well after an auspicious start. He also saved the potential game winning touchdown by knocking the ball away from the Giants star receiver in the end zone forcing a field goal.

Brady’s Drive This Time Wins a “Giant” Game: This win is just a Week 10 win but just the way the two teams battled it out in a playoff atmosphere, you could tell it was important to each team. This one was very important for NE not only from a divisional perspective as they remain four games ahead of the Jets and Bills but from a mental one as well. The Giants had gotten the better of New England the last three times they’ve met with late scores, two of them in Super Bowls.

One could tell by Brady’s body language during his presser after the game that he wasn’t happy with a lot of his own performance. Especially with a red-zone pick that was thrown behind Brandon LaFell. Brady took responsibility for it, LaFell said he ran a sloppy route and wasn’t in the right position.

Either way, this one was big or “Giant” to coin a phrase. Brady’s final drive with 1:47 left and no timeouts wasn’t always pretty, but he got the job done.The near interception and having to convert a 4th and 10 from their own 20-yard line were two key plays. But he moved them into position with key receptions by Amendola and Rob Gronkowski and the Patriots were able to pull off a dramatic win and flip the tables on the Giants.

What Now for the Offense?: With Edelman on the shelf for probably the remainder of the regular season, how will the Patriots offense adapt? The offensive line is already decimated by injuries and now they’ll miss Brady’s top target.

The pressure will be on Amendola to as closely replicate Edelman’s role as he can. He was immense on Sunday, besides his 82-yard punt return, he turned in 10 catches for 79 yards on 11 targets including several clutch plays on the final drive.

Rob Gronkowski will be looked to even more, the big man had five catches for 113 yards including a career long 76-yard touchdown strike from Brady on Sunday and Brandon LaFell will have to step up his game a notch as well. LaFell only had two catches but for 66 yards. These three will be the key players that will have to step up.

Depending upon the opponent, the Patriots could utilize more two tight end sets featuring Scott Chandler, the big tight end had an early touchdown reception as well as two deep drops later in the game. Or bring in Aaron Dobson, the forgotten one at WR who could conceivably give them a deeper target on the perimeter. Dobson did get in the game and a single catch for five yards.

Either way, the loss of Edelman is a big one and won’t be easy to replace his production or his toughness on the field.