7 years ago at 7:00 am ET
Follow @IanLogue
Posted Under: Patriots Commentary 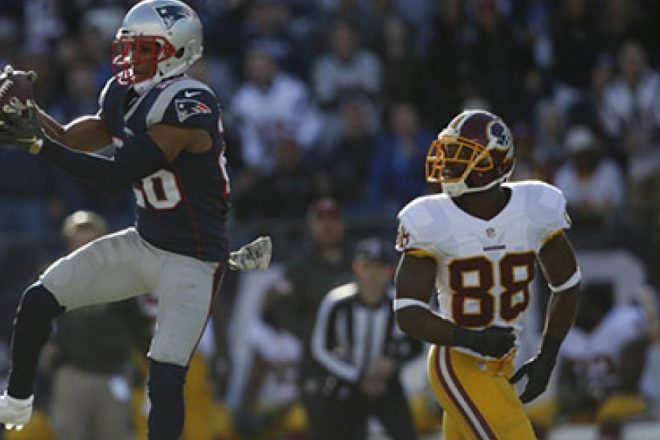 Patriots defensive back Logan Ryan may have had his moments where he’s struggled in coverage this season, but one thing that’s becoming more apparent is his growth week-to-week after seeing what he’s accomplished so far in 2015.

One of the things that’s stood out is the fact that he’s got a tendency to be around the football after intercepting his fourth pass of the season on Sunday, giving him the team-lead in that category ahead of Duron Harmon.

As pointed out by the team, Sunday’s pick was Ryan’s 11th career interception since 2013, tied for 2nd-most among cornerbacks during that span with the Dolphins’ Brent Grimes and former Patriots CB Aqib Talib.  Seattle’s Richard Sherman (12) currently leads that group.

Ryan credited his team for his interception on Sunday, with New England’s pass rush forcing a rushed throw by Washington quarterback Kirk Cousins just one play after Tom Brady was intercepted.

When it comes to Ryan, one trait that has stood out mirrors one that has seemingly made Malcolm Butler such a great player and that’s Ryan’s ability to shut out giving up a big play and having a short memory.  He started the year off a little shaky but he’s really started coming into his own in a secondary that overall has been much better than expected.

For now Ryan’s happy with his performance but he knows he and his teammates still have plenty of work left to do.

“We did a good job. I haven’t watched the film yet, but [we] don’t want to give up that six points at the end, but, overall, I’m sure it’s good, but I’m sure there’s stuff to improve on.”