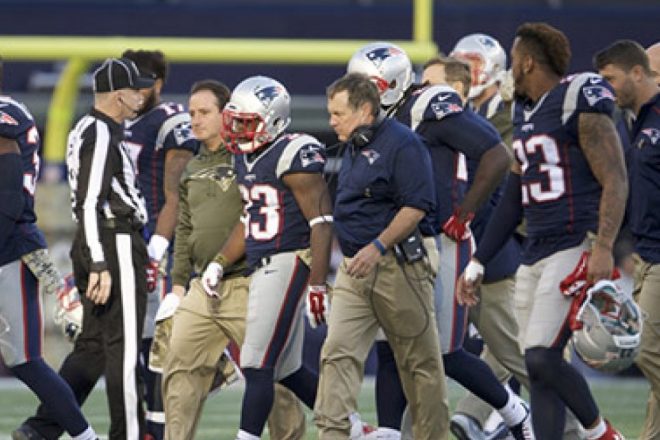 Patriots running back Dion Lewis’ third quarter knee injury didn’t look good when it happened and Monday should be a good indication of just how serious his injury really is.

Lewis went down before he was even touched following a third quarter catch and run that went for 14-yards and stayed down on the turf for some time after being surrounded by teammates and trainers before eventually walking off the field under his own power.  He left the game and went to the locker room and didn’t return.

ESPN’s Adam Schefter reported Sunday night that there hasn’t been any swelling on Lewis’ knee but that his ACL is “loose”, which isn’t a good sign.  He’s reportedly scheduled to undergo an MRI on Monday.

If Lewis is out for any extended period of time the Patriots will have to turn to someone else, with Brandon Bolden having been the player who filled in out of the backfield in Lewis’ absence and hauled in an 18-yard touchdown, one of two key third down receptions he made down the stretch.  James White, who was inactive on Sunday, may also be a candidate as he’s shown some good moments catching the football out of the backfield in spots.

Neither of the two are as quick or explosive as Lewis, whose injury comes at a tough time with New England set to face the Giants down in New Jersey next Sunday, followed by a trip out to Denver in what could potentially decide home field in the postseason against the Broncos.   As a result, his situation will definitely be something to monitor in the coming days.