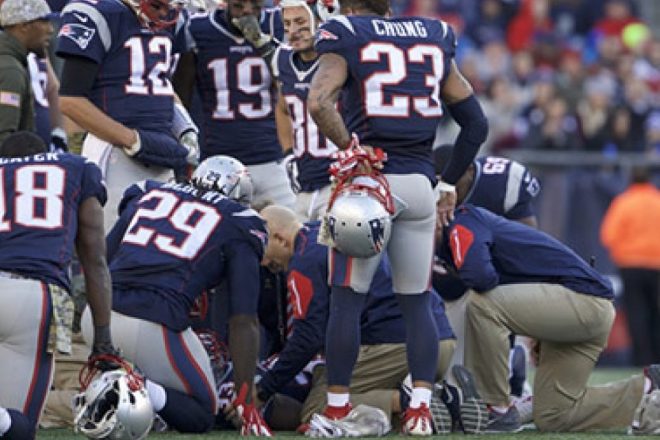 The Patriots went out and took care of business against Washington on Sunday, but it may have come at a cost.

Running back Dion Lewis went down with a leg injury during the third quarter that looked significant, despite the fact he eventually got up and walked off the field under his own power.

The injury came on a non-contact play where he went down in the third quarter after a 14-yard catch and run.  He started going down before he was touched, with many of his teammates and trainers circling him after the play was over as he laid on the turf.

Lewis eventually walked off the field but was met by defensive coordinator Matt Patricia, who put his arm around him and said something to him, before Lewis ultimately went to the locker room.

The veteran back played well, finishing the day with 4 rushes for 14 yards (3.5 avg) and also caught 4 passes for 39 yards and showed some tremendous burst and quickness against a Redskins defense that had a difficult time stopping him.

Patriots quarterback Tom Brady said after the game losing Lewis is tough and that he hopes “he’s O.K.”

As a result, it will be a situation to watch heading into next week’s match-up against the Giants down in New Jersey.

By: Robert Alvarez
Julian Edelman shares photos from the 2018 AFC Championship game in a 'throwback Thursday" post on Instagram.
13 hours ago

By: Robert Alvarez
Bill O'Brien shares his first comments and reaction in his first interview since becoming the Patriots' new offensive coordinator.
14 hours ago