7 years ago at 9:04 am ET
Follow @SteveB7SFG
Posted Under: Patriots Commentary 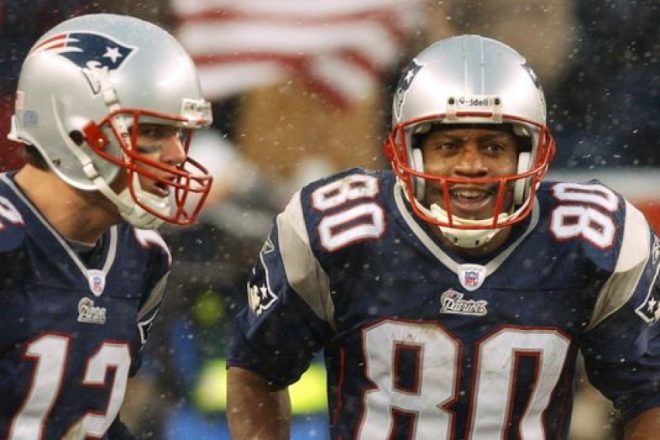 For anyone who watched the Patriots transform themselves from a perennial doormat to an NFL juggernaut, “Patriot Pride, My Life in the New England Dynasty” by Troy Brown and Mike Reiss is a must read. Also included is a foreward by Patriots QB and Brown’s teammate Tom Brady.

Brown’s early life is chronicled in Blacksville, South Carolina where his humble beginnings shaped him and prepared him for a future NFL career that lasted 15 seasons with the New England Patriots.

Brown is a shining example of a smaller player from a modest upbringing that can beat the odds and be a giant in the game played by physically much bigger men.  Brown was an 8th round draft pick (they don’t have those anymore), from Marshall so today he would be considered an undrafted free agent.

His phone call from Bill Parcells was brief and typically Parcells, after welcoming him to the Patriots, Parcells said, “Thanks Troy, you just save me a lot of money.” At the time UDFAs signed for considerably more than Brown’s $15,000 would so it was Parcells way of challenging him. More of that would come later.

When arriving in New England in 1993, the Patriots were far from the powerful model franchise that they are today. They were nearly always at the bottom and had just hired the Super Bowl champion coach Parcells to try to turn the moribund franchise around.

Brown had an immediate rapport with Parcells and he saw how by publicly rebuking players, it was a way he had of challenging them, to bring out their best. Parcells’ words to Brown were, “Troy, you’ll never be a starting receiver in this league,” Parcells said. “Just a role player is the ceiling for you…Maybe a fourth or fifth receiver is the best you can do.”

Brown went thru his trials and tribulations and survived being cut by Parcells to being brought back and gradually working his way not only on the roster but earning a bigger and bigger slice of playing time along the way. He and backup quarterback and now Patriots announcer Scott Zolak would hone their skills by running the scout team offense. They would frequently go off script and make plays.

The scout team would have plays diagrammed to go to a certain place on every down. But instead of throwing into double and triple coverage, Zolak and Brown would improvise and Brown was productive and he opened eyes on the coaching staff.

After the 1996 Super Bowl, which Brown missed with an injury, Parcells left for the Jets. Pete Carroll came to New England and the culture change was evident. Brown never felt comfortable or confident in Carroll and the team foundered. Three years later Bill Belichick arrived and everything changed.

Brown had his best season in 2001 leading the NFL in punt returns and catching 101 passes for 1199 yards and five touchdowns. Under Tom Brady, the team overcame a rocky 0-2 start to beat a heavily favored Pittsburgh team in the AFC Championship game where Brown returned a punt 55 yards for a touchdown.

The Steelers were so cocky that they hung a Pittsburgh conference champion t-shirt in the Patriots locker room. From there the Patriots stunned the NFL by upsetting the St. Louis Rams in Super Bowl XXXVI.

Brown recalls being shocked that the team during a third Super Bowl run in 2004 asked him to play defense when injuries decimated the secondary. That selfless act and the fact that he played very well in the role, epitomizes the Patriots under Bill Belichick. Everyone puts personal goals behind team goals and no one showcased that more than Brown.

As his career in the NFL was winding down, Brown knew it was time to retire when his body told him the time was right. Working out at Marshall in the off-season, he knew it was time and informed the Patriots he was retiring.

Brown parlayed his playing career into a broadcasting one, he’s now a regular on Comcast Sports New England with their Patriots coverage and was elected to the Patriots Hall of Fame in 2012.

It is an easy, entertaining read and one that you can’t put down. You can order it on-line thru Amazon.com or find it in your own bookseller everywhere.