7 years ago at 8:42 am ET
Follow @ralvarez617
Posted Under: Patriots Commentary 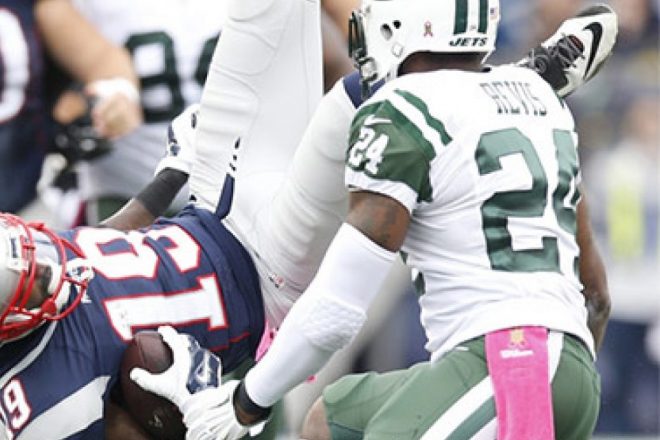 New England Patriots wide receiver Brandon LaFell returned to action Sunday afternoon versus the New York Jets for the first time since winning the Super Bowl back in February.

LaFell was sidelined for all of the preseason and first five regular season games with a foot injury.

Unfortunately for LaFell, his first game back was one he would likely want to forget as he recorded a mere two receptions for 25 yards after being targeted eight times by quarterback Tom Brady. According to ESPN Stats and Info, LaFell also had six of the ten Patriots dropped passes in the game.

LaFell was quoted in the locker room following the game saying, “If I had to give myself a grade, it would be ‘F’…”I let the ball get out of my hands too many times. Tom (Brady) threw some good balls and I should have caught them. But overall, man, we got the win. I just have to get back into it. We have a short week, dust the cobwebs out, and come back out and play a better game.”

The nightmarish “butterfingers” 2015 debut led to this viral Vine video below created and posted by Patriots fan PJ King (@Kinga310) that poked some fun at LaFell’s expense.

The good news is with a short week ahead, LaFell will have a great opportunity to quickly be able to put his bad performance behind him as the Patriots move on to Miami Thursday night at home.