7 years ago at 9:58 am ET
Follow @IanLogue
Posted Under: Patriots Commentary

Sunday’s showdown against the Jets may finally present one of the toughest challenges of the season for New England, and Darrelle Revis isn’t the only reason.

New York’s defense right now through five games is playing lights out, putting up some of the best numbers in the NFL and it’s one of the biggest reasons why the Jets come into Gillette Stadium with a 4-1 record through the early part of 2015.

They lead the league in total defense, giving up an average of 269.2 yards per game, just ahead of the Broncos, who are also having a tremendous year defensively at this point. They’re also second in the league in interceptions with 8 (Denver is first with 9).

Running the football against them is also an issue, with the Jets leading the NFL in run defense, allowing just 82.6 yards per contest on the ground. Beating them through the air is no easy feat either, as they’re second in pass defense and have been holding teams to 186.6 yards passing per game.

One other category they’ve been strong in is forcing turnovers, and they’re third in the NFL in takeaways with 15, more than twice the number New England, who has 7. New York also carries a +5 turnover differential at this point, one better than New England (+4).

According to Brian Costello of the New York Post, they’re on pace right now to have one of the best defenses in team history and potentially one of the best ever, giving up an average of 4.3 yards per play. As Costello points out, two of the best in NFL history in that category was the 1985 Bears (4.4) and the 2000 Ravens (4.3). In yards per game, the Jets total isn’t far off from the 258.4 the ‘85 Bears allowed, while the 2000 Ravens averaged 247.9.

The Colts did a good job against Brady defensively Sunday night, making life difficult throwing the football and holding him to his lowest completion percentage of the season (62.2%). Brady persevered and still put up 312 yards and 3 touchdowns, but they definitely made him work for it. 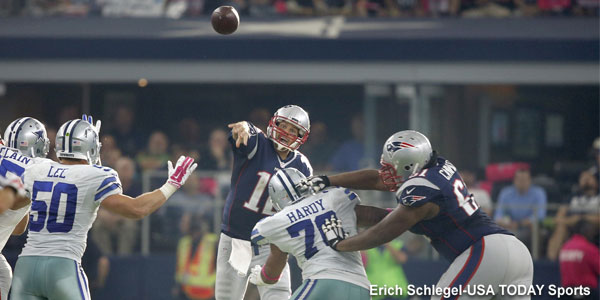 Brady has faced some strong defensive opponents in recent weeks, and the Jets present yet another this weekend when they visit Gillette Stadium. (USA TODAY Images)

The Jets may now be his biggest challenge of the season and it’s tough to overlook what they’ve done so far. Granted they haven’t played anyone great yet, having beaten the Browns, Colts, Bills, Dolphins and Redskins, but the same could be said about New England at this point who has beaten just one team, (the Steelers at 4-2), with a winning record.

But Sunday’s match-up should be one of the toughest of the year for both sides, and fortunately for the Patriots, they’ll play this one in front of the home crowd. New England hasn’t been at Gillette since back on September 27th in their 51-17 win over Jacksonville.

New York likely won’t allow 50+ points but this game will see the AFC East’s top teams battle it out for first place in the division. It should be a good game, but if the Jets’ defense plays the way they have been through five games, it might be one of the more tightly contested battles we’ve seen all season.