The New England Patriots are at the quarter pole of the season and in good shape, leading the division with a 4-0 record. Many expected the team to be in the 2-2 range had Tom Brady was forced to serve a 4-game suspension for the ridiculous Deflategate fiasco from the 2014 season.

Brady has been on fire in the early going of the season completing better than 72 percent of his throws and tossing 11 touchdowns against zero interceptions. This is a far cry from the first four games of 2014 when the offensive struggled badly out of the gate. But perhaps the biggest reason the offense is clicking is the 6’6, 265 pound tight end that is healthy this season.

Rob Gronkowski is off to a great and more importantly, a healthy start to 2015 and the results are the Patriots are scoring points at a near record clip. Gronkowski’s numbers for the season include 20 receptions for 375 yards for a gaudy 18.8 yard per reception average and four touchdowns.

A healthy Gronk is a legitimate MVP candidate at this early juncture of the season. He can do it all and has, which is a big reason the Patriots are 4-0. Most tight ends are known for their run blocking and Gronk is as good as they come. Look back at the Bills game and watch him seal Mario Williams on Dion Lewis’ (this IS his name Rex) touchdown run.

No tight end is better in the short to intermediate area at getting the football and moving the chains. He’s especially unstoppable in the red zone where his next touchdown will be his 60th of his career. No tight end in NFL history has gotten there that fast.

But an area where he’s getting increasing reps at and thriving is as the Patriots deep threat receiver. Wait…What you say? A 6’6, 265 pound deep threat? You betcha.

Ask any Patriots fan what the team lacks and you are bound to hear … “they need a deep threat wide receevah!” or the old favorite, “Brady needs a field stretcha!”

Having a wide out that can do that is always a plus, but as Kerry Byrne from Cold Hard Football Facts points out, the majority of those guys are shiny hood ornaments.

Brady is having an MVP worthy season himself but one of the knocks we always hear leveled at New England is that the Patriots are nothing but a dink and dunk offense. And that Brady can’t throw the deep ball.

A look at Brady’s deep ball statistics courtesy of Ian Logue at PatsFans.com however shows that while Brady has struggled throwing deep to the right side, his numbers throwing deep down the middle and to the left are just fine.

Where does Gronkowski fit in this equation you ask?  Both of Brady’s completions to the deep right come courtesy of Gronkowski, overall he’s 2-6 when targeting Gronkowski on deep passes to the right. Included in this is Gronk’s season long 52 yard reception against the Steelers on opening night. Brady connected on another deep 30 yard pass to the big man in that game but he stepped out of bounds just as he was corralling the football.

Targeting the deep middle of the field, Brady is a perfect 3-3 when targeting Gronkowski and just 1-4 when targeting others. Interestingly enough, Brady’s only deep incompletion to the left is to Gronkowski.

We’ll take a look at a few of Brady’s deep passes to Gronk courtesy of the NFL’s All-22 Coaches film.

In the Patriots opener against the Steelers Brady has Gronkowski and Scott Chandler lined up to the right side inline in an unbalanced line. Gronk is lined up inside with Chandler on his right shoulder. 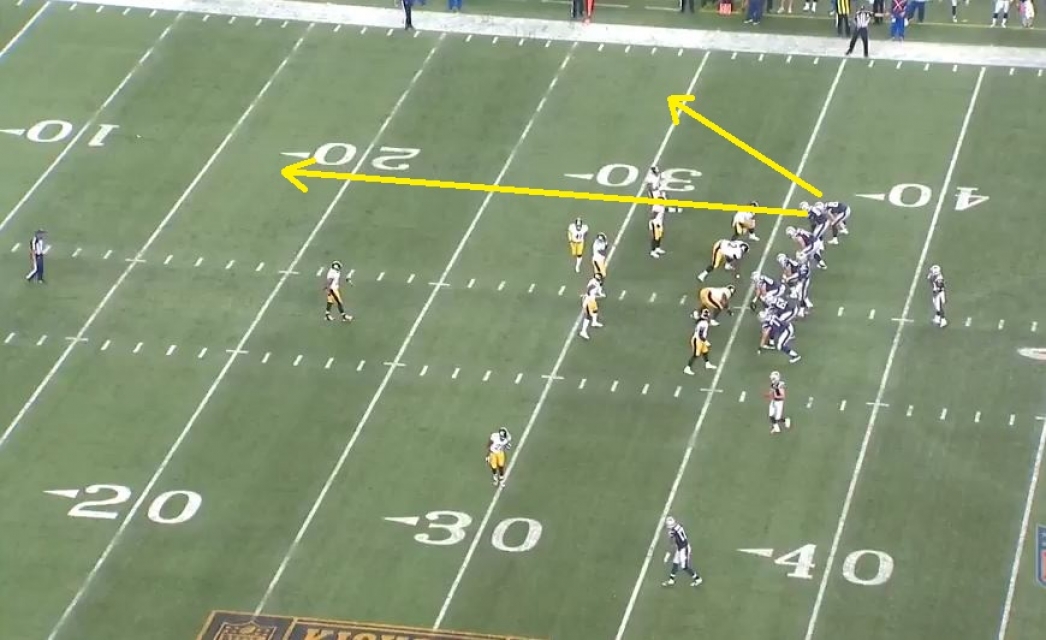 At the snap Chandler runs to the outside dragging his defender with him and Gronk runs straight down the numbers with the safety trailing to his outside shoulder. 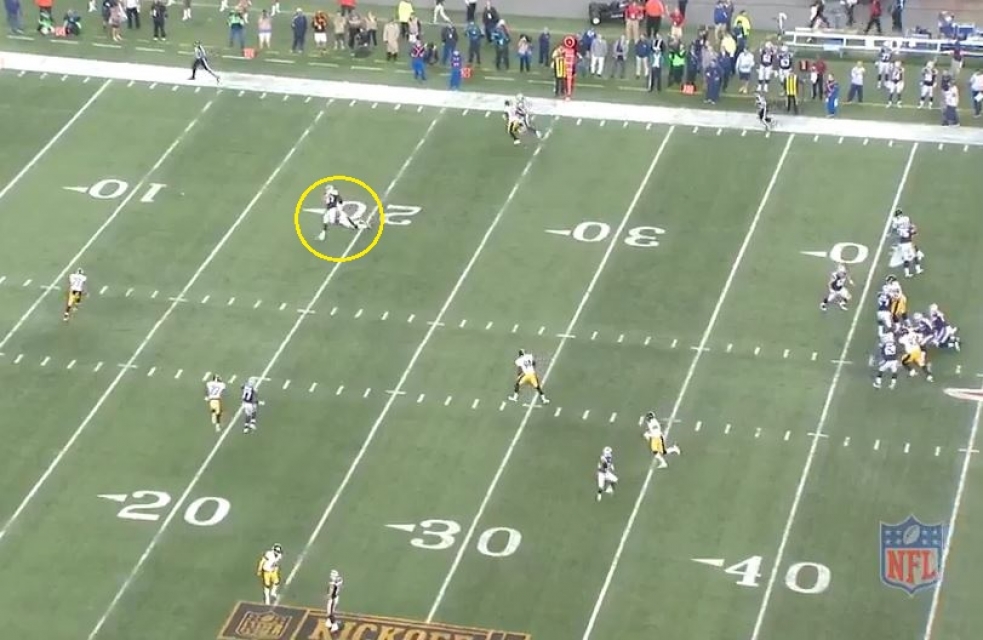 Brady has a perfect throwing window and tosses it perfectly to Gronk’s inside where he makes an easy catch for a 19-yard gain.

Later in the game, the Patriots go to an empty backfield and go to a spread formation. Gronkowski is aligned to the right just inside of Julian Edelman at the numbers. At the snap, Gronk blows by the jam at the line and leaves the safety deep in his wake. He runs straight down the numbers where Brady again has an easy pitch and catch with him. 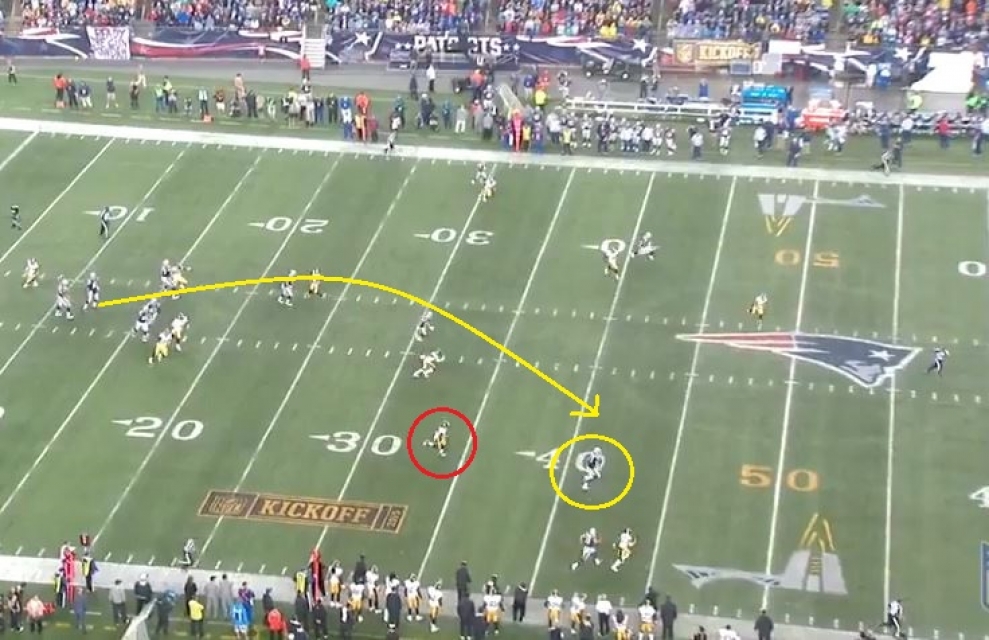 The result was a 52-yard gain where Gronk cuts back against the grain and runs another 25 yards downfield to set the Patriots up in Pittsburgh territory.

Later in the game Brady goes back to the well again, this time deep down the right sideline. But Gronk’s foot just hits the chalk as he comes down with the ball, otherwise it would have been another 35-45 yard gain again. During the Week 2 matchup against the Bills, during the Patriots second possession, they go 5-wide at their 21 yard line with Gronkowski lined up on the right side just outside of the hash marks. The Bills are showing blitz and have two deep safeties. 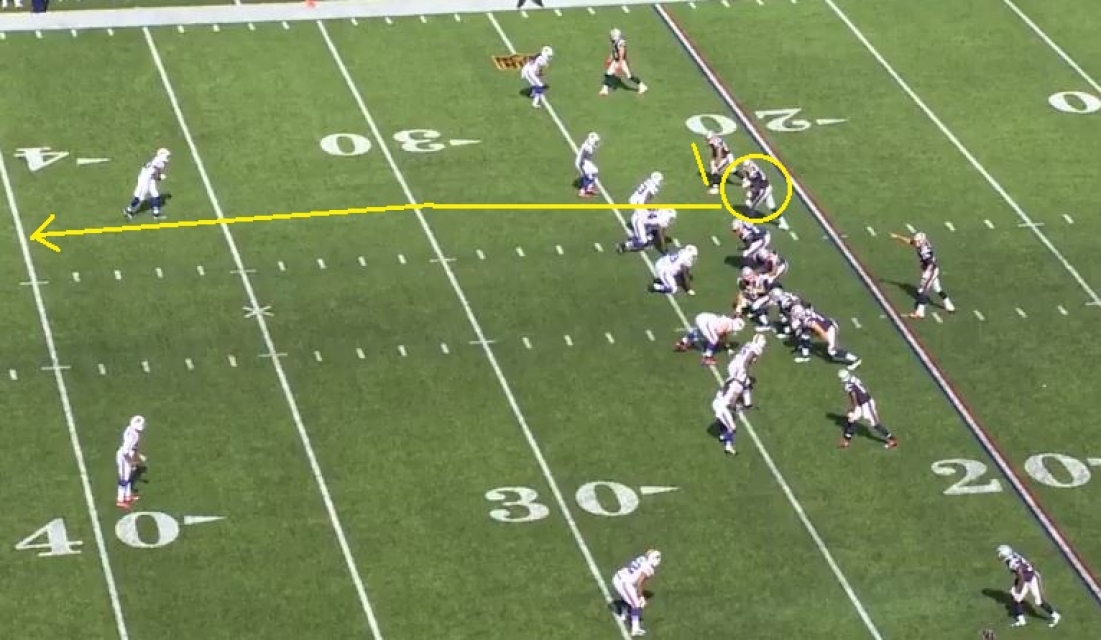 At the snap, Danny Amendola rubs the defender as he and Gronkowski cross. It gives the big man just enough space and he gallops down the seam with both a linebacker and safety in tow. 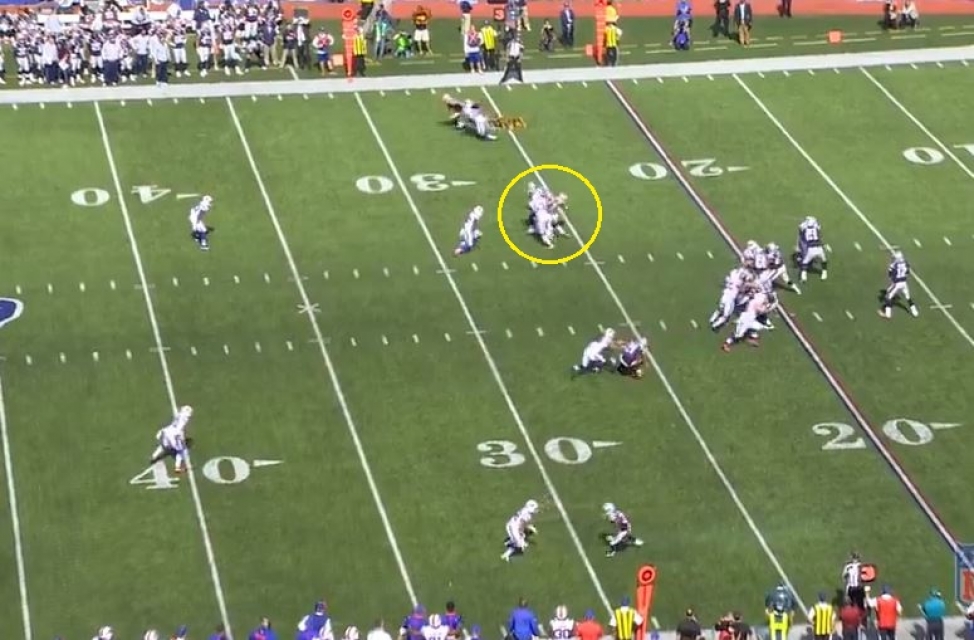 Brady delivers the ball on the money and the result was a 28-yard gain for the Patriots. 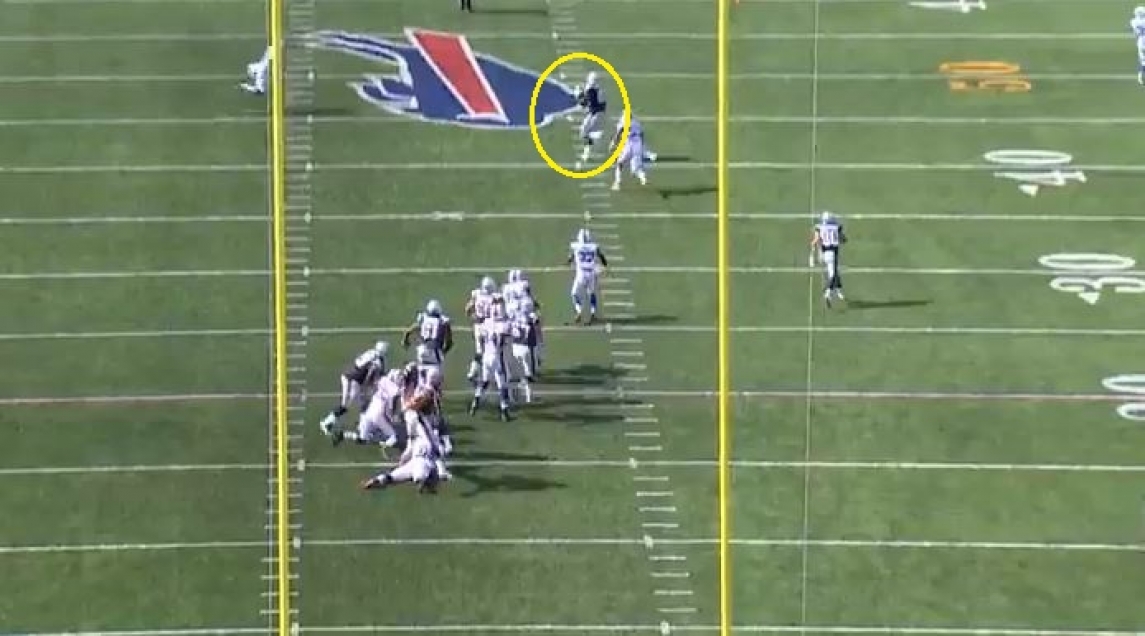 Later in the Bills game, the Patriots have crossed midfield at the Bills 46-yard line. Again Brady has the offense spread out. The Bills are a bit gun shy and have a linebacker on Gronkowski but give him a free release and is 6 yards back with a safety aligned directly behind the LB another 6 yards beyond that. 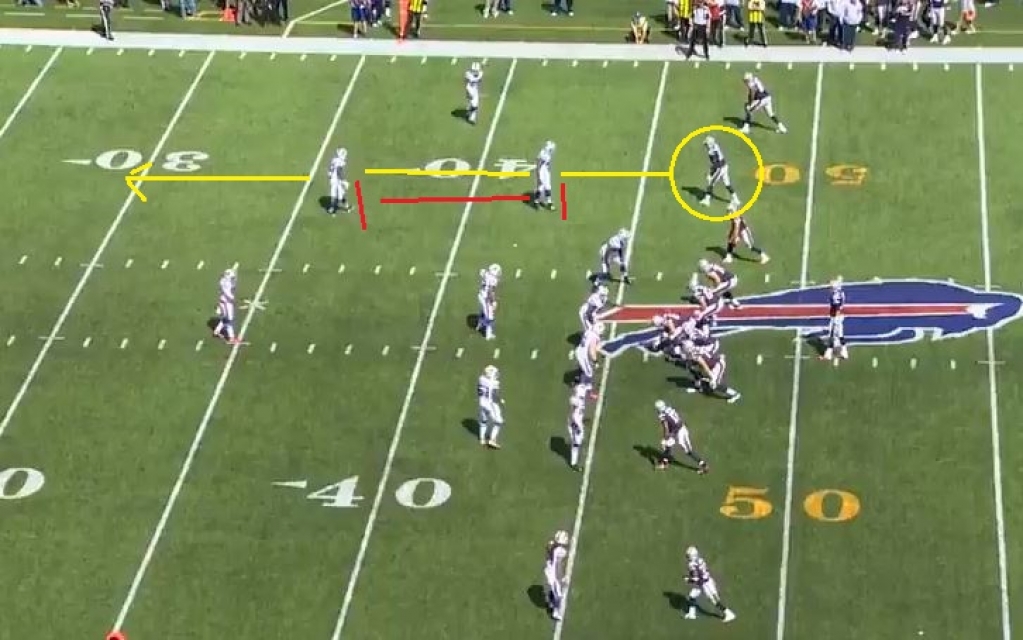 Gronkowski runs right by both and is wide open on the right hash marks at about the 15-yard line where Brady corks a laser to him. Wide open, he catches the ball and is finally tackled after a 36-yard gain which puts the Patriots in first and goal. 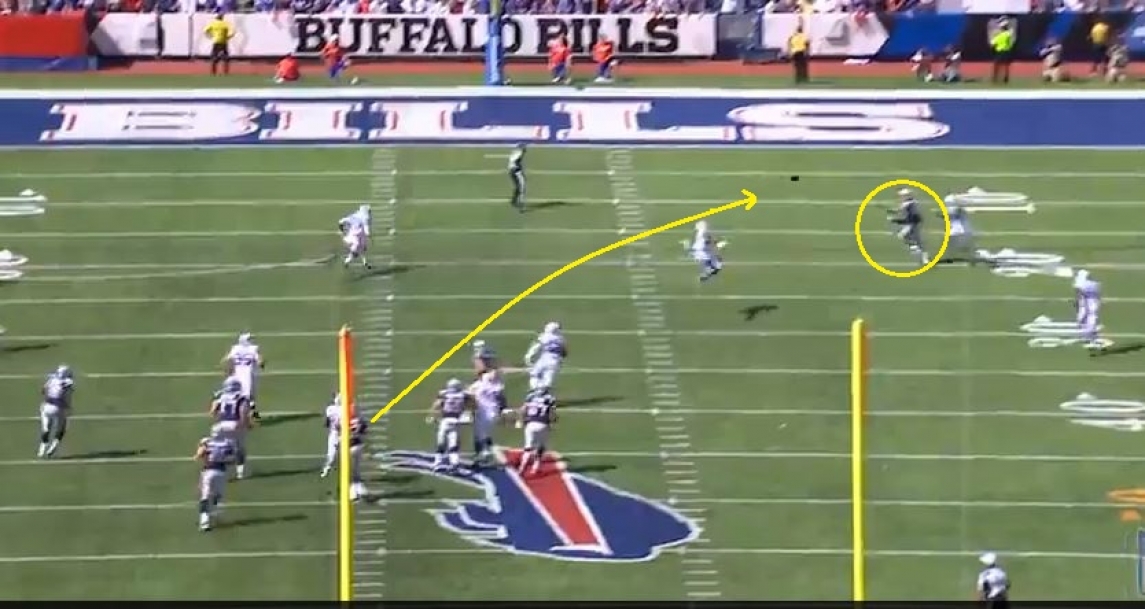 During Week 3 against the Jaguars, the Patriots are aligned with three wide receivers. Brady is in the shotgun with Dion Lewis aligned to his right. Gronkowski is lined up inline on the right side. Jacksonville is playing soft with big cushions everywhere. 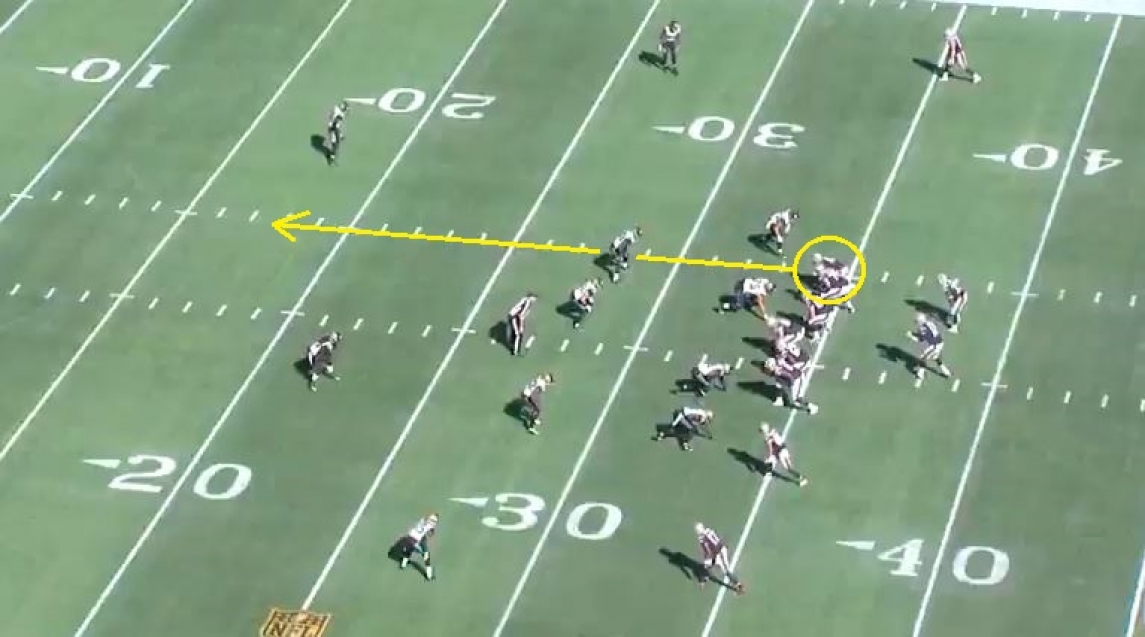 Gronkowski runs right by the linebacker down the middle of the field where Brady hits him for a 27-yard gain. The safety help arrives to late and the Patriots are set up with a first and goal. 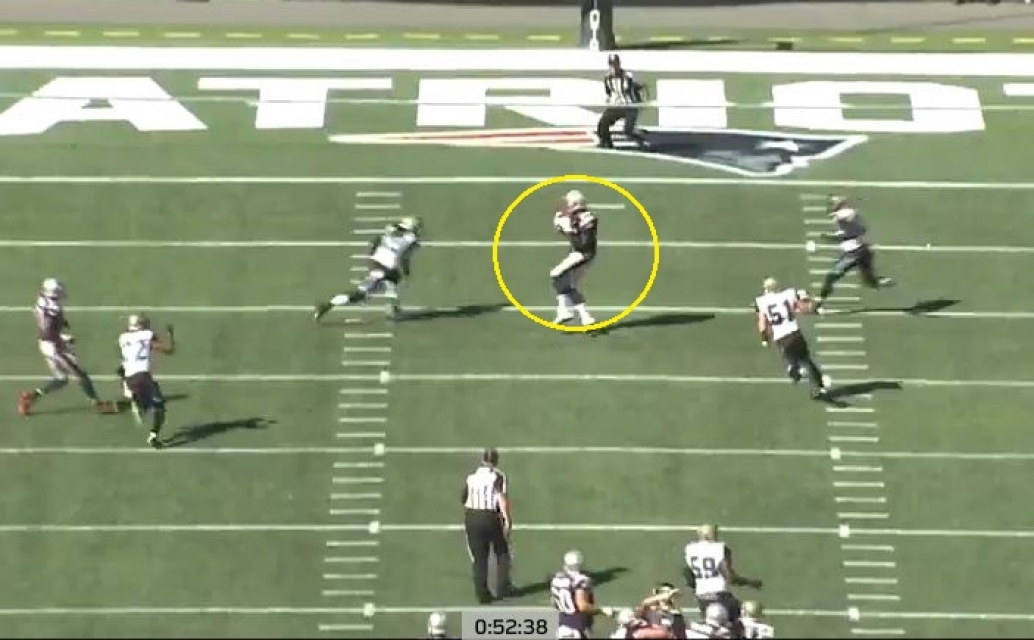 These are just a few of the plays that Gronkowski has made this season and we’re only a quarter of the way in. As long as he, Brady and Julian Edelman remain healthy, the Patriots offense is going to be dynamic. They should get back Brandon LaFell soon as well. LaFell had over 1000 yards between the regular season and playoffs last season.

But this offense is as good as Gronk goes; he’s a force multiplier. He makes everyone else around him better and he opens up a tremendous amount of real estate for the other receivers in the passing game.

Gronk is a true MVP candidate at the quarter mark of the 2015 season. He can block, move the chains and yes even be a deep threat for Tom Brady and the Patriots offense. With JJ Watt getting MVP consideration every season, it may be time for another big man to get some votes.

By: Robert Alvarez
Rob Gronkowski shares his thoughts on the Patriots bringing back Bill O'Brien to run the offense and voices his excitement and optimism.
17 hours ago