7 years ago at 6:38 am ET
Follow @SteveB7SFG
Posted Under: Patriots Commentary 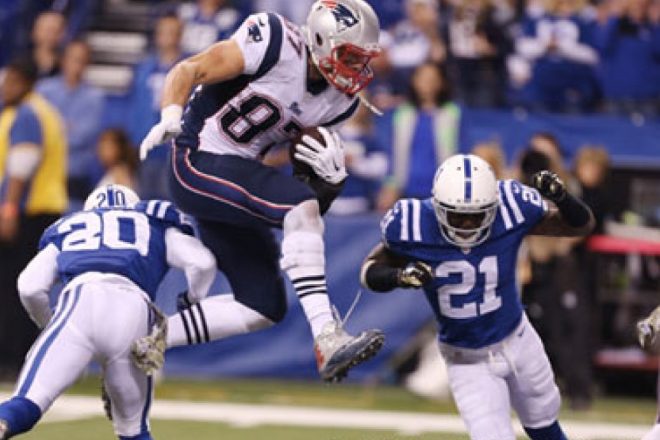 The Patriots go back on the road this week as they travel to Indianapolis to take on the Colts in a rematch of last season’s AFC Championship Game.

The game is slated for a prime time Sunday Night Football on NBC. Kickoff is slated for 8:30 p.m. and NBC’s announcing crew will consist of Al Michaels and Cris Collinsworth handling play-by-play and analyst duties with Michelle Tafoya on the sidelines.

The Colts (3-2), won their third game in a row last Thursday night with a 27-20 win over the Houston Texans. Running back Frank Gore had 98 yards rushing on 22 carries and WR Andre Johnson had his best game of the season with 6 catches for 77 yards and two touchdowns against his former team.

Quarterback Andrew Luck is slated to return to action this week from his injury, he was a full participant in practice on Monday. Another sign that he’s fully healthy was the team releasing QB Josh Johnson early this week.

The Patriots (4-0), overcame a slow first half to defeat the Dallas Cowboys 30-6 on Sunday. Tom Brady was sacked five times in the first half but was very sharp going 10-11 for 165 yards and two touchdowns after halftime to lead the Patriots.

The Patriots defense held Dallas to just a pair of field goals and forced two turnovers. This was easily the best game of the season for the defense. They held Brandon Weeden to only 188 yards passing and the Cowboys to only 264 yards in total offense.

Here are our Five First Impressions of the Colts:

Focus on the Trenches Once Again: The Patriots have dominated the last few meetings between the two teams and have done so by completely winning the battle up front on both sides of the ball. That will once again be a key area to focus on again as the Colts have revamped their defensive line with three new starters.

With Arthur Jones down with injury, the Colts now go with David Parry as the nose tackle, flanked by Kendall Langford and Henry Anderson at defensive end on the defensive front. This will be a key area to watch. The Patriots with LaGarrette Blount and Jonas Gray have dominated in the running game for the last three meetings averaging 219 yards rushing and this is something the Colts must improve upon this time.

The offensive line play has improved in recent weeks and with Gore finally giving Indy a running game, it will take a lot of pressure off of Luck to have win the game single handedly. Their play against an improved Patriots front seven will be another key area to watch. Pass protection for Luck will be an area that Indy will want to improve upon as the Patriots have been able to get to him and force him into bad decisions and throws in recent meetings.

Turnovers Plaguing The Colts: Through the first five games of 2015, Indianapolis ranks 31st in the NFL with a minus seven turnover ratio. Colts quarterbacks have tossed seven interceptions and the team has lost five fumbles. They’ve only been able to add five interceptions and no fumble recoveries yet on the season.

Facing a Patriots team that is always in the top five of turnover ratio and is lighting up the scoreboards for over 37 points per game, this is one area that the Colts coaches will be driving home all week.

Losing the turnover battle against New England this week, would almost certainly spell defeat for the Colts. And with a defense that has done well at creating some turnovers against Tom Brady in the past, this will be a prime time for Indy to force Brady into his first interception of the season.

Will New Offensive Players Gore, Johnson Hold Up: The Colts in free agency this season opted to beef up the offensive side of the ball by bringing in two big signings in Frank Gore and Andre Johnson. But one has to wonder if the age of both players will impact their effectiveness down the stretch.

Gore at 32 is at an age where big, powerful running backs begin to show the wear and tear of their profession. He easily had his best game of the season last week and gave the offense a needed shot in the arm.

The bigger question is, can he continue to be an effective runner late into the season and in the playoffs for Indianapolis? The Colts haven’t had an effective running game in years and if he begins to wear down, they’ll back to square one.

Johnson also had his best game of the season with a solid effort against his former team. He looks like he’s lost a step in the passing game but the emergence of Donte Moncrief as the #2 WR behind T.Y. Hilton may ease Johnson into the complimentary 3rd WR role, which he can still be effective at.

Pressure is on Luck this Sunday: When he entered the league, Andrew Luck was touted as the next great QB and he’s put up some great numbers. But in each meeting with the Patriots, the press, ever anxious to anoint him as the new top QB of the league and passing by Brady, he’s failed badly.

Luck is still looking for his first win against New England and has yet to play an impressive game against a Bill Belichick defense. After a much hyped offseason where the Colts spent free agency and their top draft pick on offensive players, they started poorly and Luck, prior to his shoulder surgery was off to the worst start in his career with  five touchdowns and seven interceptions in three games.

Indy has plenty of offensive weapons for him to choose from, but Luck is going to have to limit the big mistakes that have plagued him against New England in the past. Perhaps now, with the expectations tempered by the Colts slow start will be a perfect opportunity for him to finally have a big game against the Patriots.

But with Lewis out of the backfield coupled with Rob Gronkowski in the passing game, the task becomes even larger. If there’s one area that is the most glaring matchup that favors New England, it will be the passing game targeting the linebackers, an area that the Colts haven’t addressed this season.

They don’t cover the tight ends exceptionally well and Gronkowski will be a big focus of the defense this week. Even getting back CB Greg Toler this week, this will be an area where the Colts will not only have to improve, it will be an area the Patriots will look to exploit.